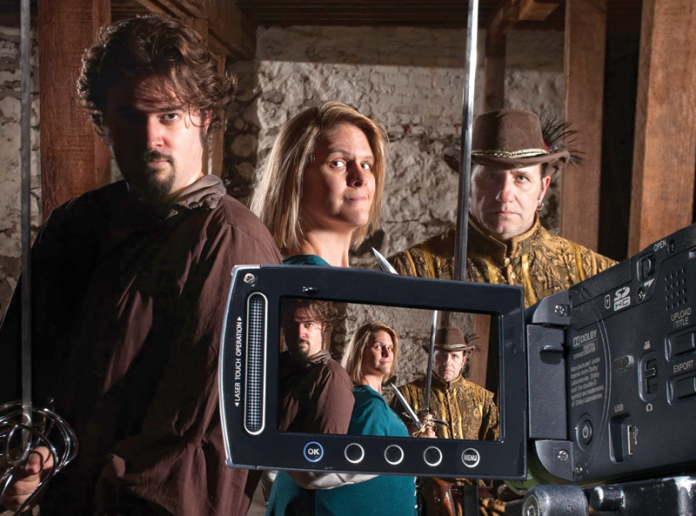 The craft of adapting a novel and creating a screenplay looms as one of the ultimate challenges for any writer. Like raising someone else’s child, you want them to remember their birth parent, but they must become their own work of art; an individual unto themselves.

The first step is finding a book you truly love, as a book. After you get over the glow of the story you just finished, ask yourself: “Is this a movie?” When I read Dan Brown’s The Da Vinci Code I kept thinking about it as a movie. Even before I finished it, I felt like it was an embellished outline for a movie. It felt like a screenplay. Did it make a good movie? Well, according to imdb.com, it grossed more than $750 million worldwide. I am sure it wasn’t a great challenge for Academy Award-winning screenwriter Akiva Goldsman to write because of how it was so well organized as a book. Not all books are like that. You can learn a lot from the special feature interviews with writers found on many of the special disc releases of movies.

Look Before You Leap

Before you jump into the fire of adaptation, you have your most important task to conquer first: securing the rights. Five years ago I read a very compelling historical novel about how the United States got into the Vietnam War. In this case, I had a personal relationship with the author. After a conversation over some coffee, I asked him if I could write an adaptation of his work. After I assured him I would do all the work, he agreed and we shook hands. I jumped into the project. Bought several copies of the book, hired a researcher and started to imagine how to build this book into a movie. Then the email arrived. His literary agent demanded we cease all work on the screenplay. It seems the agent was already shopping the book to some “top-notch” Hollywood writers. Lesson learned.

You must have an option agreement before you begin working. Buying the rights can be as much as $1,000 to millions for best-sellers. According to Steve Stockman, writer, director and author of How to Shoot Video That Doesn't Suck, terms of adaptation deals are 100 percent negotiable. There are no standard deals. That said; if a friend gives you the rights to their book and they have faith in your ability to get a movie made, you might have it forever for nothing. On the other hand, if a highly paid writer charges a fortune for their best-seller, you may pay a lot for a much shorter period and lose all of it if you don't get the movie deal put together in the appointed time.

Although this article focuses on novels, one can write an adaptation of a stage play, a comic book, a song or a magazine article. The film Brokeback Mountain was originally a magazine article in The New Yorker magazine written by Annie Proulx and many DC and Marvel comic tales have become big box office movies. The same procedures apply for any work, you must secure the rights.

A book can contain three to four times more material than you’ll need for a 120-page screenplay. And when you write a screenplay, the powers that be want you to format it correctly. The mark of an amateur is some free-form presentation that screams “newbie.” All screenplays look the same whether they are original ideas or adaptations.

As the famous screenwriting guru and author of the epic how-to book, Story, Robert McKee warns, if the book structure is such that “if a single cog is taken out, the clock stops telling time – your task will not be one of adaptation, but of reinvention.”

The challenge comes because of two different audiences. Part of the audience, especially if the book was highly successful, will be big fans of the novel. They always judge your screenplay against their pre-conceived notion of the pictures in their head as they read the book. The other part is the people in the audience who just want to watch a great movie. You need to write a great story, in spite of the fact that it might not be exactly like the book. Story telling is what a writer does.

After reading the book the second and third time, put the novel down, close your eyes and think: What is this book really about? What is the driving force in this story? Is there a quirky premise that works as a short description of a movie? Use the classic analysis of antagonist vs. protagonist; bring the real conflict of the story to the surface. Where are the moral choices that lead to genuine changes in your lead character?

You need to find the gems and capture those quotes that create the voice of your characters. You can improve them by editing, placement and interaction as you flesh out your story.

Charlie Kaufman was faced with the challenge of adapting Susan Orleans’ The Orchid Thief, a book about flowers. Becoming frustrated by the process, he wrote himself, along with an imaginary twin-brother, into an adjacent plot line of this Academy Award-nominated screenplay Adaptation. He created a story within a story that combined the themes of evolution and adaptation. A brilliant movie to watch before you attempt an adaptation.

Rip and Read It Again

One of my tips to young adapters: “become one with the material.” What may seem like a brutal approach, but effective, is to buy a couple extra copies of the book, break the spine and sort the individual pages into plot groupings. For those books that jump in and out of different eras or time zones, physically reconstruct those pages into its own isolated story. Reread each segment and reanalyze the value of each of those plot segments of the story. You can then jigsaw the original work into what is a basis for your first outline. If you feel guilty about killing a book, you may always use storyboards.

Use one of the copies of the book to focus on the dialogue that takes place in the document. Highlight the quotes that should make the leap from the pages of the book to the mouths of your characters. The 1965 book Cool Hand Luke, written by Donn Pearce, was told in first-person narrative without any of the dialogue encased in quotes. According to America’s Film Legacy by Daniel Eagan, Pearce sold the rights of his book to Warner Bros. for $80,000 with an extra $15,000 to write the screenplay. The screenplay was eventually completed by Frank Pierson. Pierson, a Harvard educated writer, added the line, “What we’ve got here is failure to communicate.” That line was never in the book. In fact, the novelist hated the line claiming it wasn’t something that a southern prison camp captain would say. The line was used twice in the screenplay; once by the captain, then later in the play, mockingly, by Luke played by Paul Newman, and it became one of the most famous lines in moviedom, copied, parodied and re-quoted tremendously.

You need to find the gems and capture those quotes that create the voice of your characters. You can improve them by editing, placement and interaction as you flesh out your story. The first draft can be slightly over-written, but sooner or later you’ll have to get it down to 120-pages. Use montages to include important information from the book in a quick visual form. Get rid of characters that bring little to the party. Think about combining characters into one strong person who moves the story along. There is no penalty for reinventing. Never agree to rewrite a book into a screenplay verbatim; kiss of death.

You’ll need to have a beginning, middle and end to your screenplay, which may not mirror the book. Most novels have diversions, back stories and deep character development. These don’t serve any purpose in a screenplay, but you should be intimate with them as you shape your story. My analogy has always been steam cleaning a rug in a room. You take all the stuff out of the room, clean the carpet, and then only put back what is necessary. The rest you can put in storage. Most of the best software programs make it easy to add and delete scenes.

Make sure you are aware of what happens to these same characters as they progress through a series of novels. Like with Stieg Larsson’s The Girl with the Dragon Tattoo; she has the tattoo in the other two books, you have to include it. The seven-book, eight-movie Harry Potter series had many characters come and go from book to book, but the final book’s storyline depended on a few that might have appeared to be minor characters in book two or three. Because it was an on-going series, Harry Potter screenwriter Steve Kloves worked closely with novelist, J.K. Rowling, who had approval on all scripts and worked as a producer on the final installment. In most cases, however, unless you are obligated by agreement, you should avoid seeking approval from the novelist at every turn: do your research, do your deal and then isolate yourself so that your project isn’t ruined by the meddling birth parent.

When you are ready to sell your work, make the reader aware it is an adaptation (it should be on the title page), but don’t encourage them to read the original work before they read your screenplay. Give the work it’s best possible chance as being reborn as a movie. This might be difficult if the original story is widely known, but do remember to make it clear that there is a built-in audience for an adaption of a best-selling book.

For some, writing an adaptation of a novel may be harder and is surely more expensive than creating an original play, but the finished work is just as much your work of art. Sure you had help, but most writers write what they know. Much of what they know comes from observing life and listening to people speak and then massaging those experiences into their story. Adaptation is one of the ways to create great movies. Just remember to thank the author of the novel when you are holding that Oscar on stage in front of 40 million viewers.

Dwight C. Douglas is a VP of Marketing for a major broadcast software company and creator of YouTube videos.