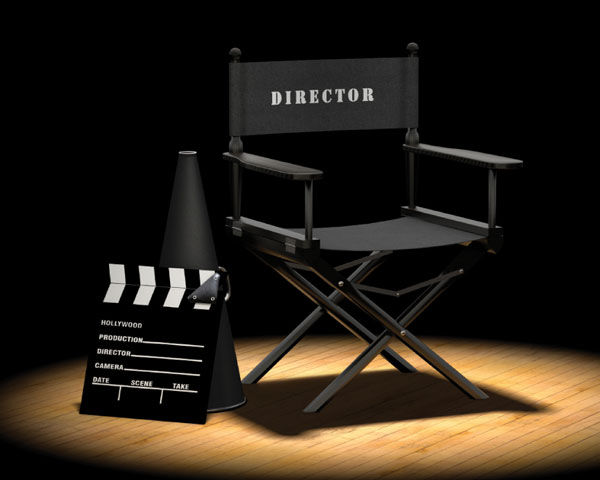 Over the course of the last few years, I've conducted a handful of informative interviews with Director Ron Howard. Sure, I occasionally just geeked out and got goofy when he revealed certain film facts. For instance that he didn't feel secure writing the script for his early film, Cotton Candy, alone, so, he collaborated with his brother Clint. How cool is that? Howard also told me that after all the hair critiques Tom Hanks received in The Da Vinci Code, the directive for the sequel was, "Give Tom a haircut!" Ultimately, though, I'm actually talking about the kind of stuff a budding director like me can really use. Even if it was Ron's unspoken, but instructive, example of "Stay calm".

Recently, I shot a music video, in a Connecticut town, not far from where Mr. Howard (my unofficial patron saint) has an office. When things went awry, when my camcorder gave an unexpected scream and died, when the winter weather went from fair to something created by Industrial Light and Magic, I thought of Ron. I called up the info he imparted. And got through my shoot. I now, video producers, pass along these bits of Howard/Zen wisdom to you.

Just as director Ron Howard did in Rome for Angels, I made sure I visited my location in Westfield, the week before the shoot. I brought along my protagonist, singer/songwriter, Dylan Connor, too. The video was to have him basking in front of Demetrious's Coffee Shop, singing his song, Blood Like Fire. The coffee shop has a large window, perfect for framing a musician. Also, I thought people passing Dylan on the street had nice visual possibilities, as well. I had my trusty Xacti HD1A 5.1 MP MPEG-4 Camcorder. I framed Dylan in the coffee shop window, shot some footage of him singing and strumming and it all looked great on my LCD monitor. My first problem then arose.

Dylan, a musician who writes great songs and plays them all over the East Coast, had a twinge of a freakout. Not as bad as anything Russell Crowe did in Ron's A Beautiful Mind, but enough to make me nervous.

"I don't know if I can do this," he said suddenly. "I'm a musician, man. Maybe you should get an actor – like Pacino."

Two thoughts hit me simultaneously. One was, 'I don't think I can meet Al's price.' The second was a bit of wisdom, straight from the beautiful mind of Ron Howard. He told me that when he wanted to use Frank Langella and Michael Sheen in the film, Frost and Nixon, there was resistance on the part of the studio to cast two actors who weren't big names. Ron told me, not only did he admire these two men as performers, but that it would be "karmically imprudent" to use anyone else in his film; especially since Langella and Sheen had originated their roles on the stage. My 'actor' may have been nervous, but he projected something cool and tangible, that a professional, lip-synching actor would not. Calmly, I told Connor he'd be great, to just be himself next week, and one day he'd be glad I didn't replace him.

I went home and storyboarded a bit, so I'd know where Dylan was in the frame and where the camera was (including some cool cutaways and coverage), and got ready. Whenever I got nervous, I whistled the theme to The Andy Griffith Show. It wasn't the last time I'd be whistling that tune, believe me. 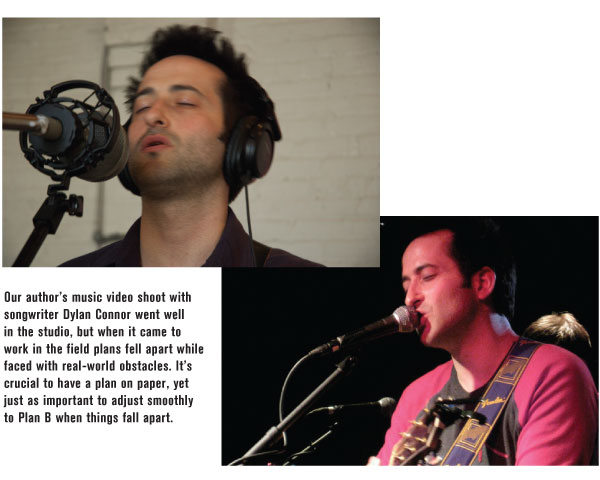 For instance, the first few minutes of the shoot that following Saturday. Picture it: Dylan Connor, standing in front of the window of Demetrious's Coffee Shop, perfectly framed and singing his heart out. When, suddenly, snowflakes started falling, giving the impression that a goose was being plucked two stories above us. I kept shooting Dylan, even though he looked like he was starring in a remake of Orphans Of The Storm. As I tried to get a nice close-up of his hand on the fretboard, my digital zoom refused. To zoom, I mean. Then, as if in a divine intervention, Mr. Demetrious came out.

"I think I change my mind about these," he shouted into the storm. "I think you will keep customers away. You have to go somewhere else entirely."

I couldn't tell if my shaking was from the cold or an incipient panic attack. When I remembered another Howard-ism. Apparently, when shooting Angels And Demons, the director had told me at the very last minute, Rome's new mayor had revoked his permit to shoot in certain locations in the city. Did Ron just fold and say, let's go to another town? Nope. He told me he and crew just scrambled around, saw some great locations and even shot a few scenes before anyone could shut him down. Giving his film, "More of the anxious tone I needed and might not have had if everything went smoothly." When I saw Janey's Records, a few storefronts down, I turned off my Xacti, and told Dylan to follow me.

After some fast talking (and a few CD purchases), I got Janey to agree to let us shoot right in the store. Hey, what better place to do a music video than an old record store? Then, a disaster hit that made scuffling for a new location seem like a nice aerobic exercise. My Xacti, which I guess I had used too often and for too long, squealed and died. Dylan (who teaches by day), couldn't really re-schedule, so we were in a bit of a fix. Alright, a large economy-sized fix. I felt like quitting, but Ron's voice kept echoing in my head: 'The worst thing you can do as a director is freak out when things fall apart." Still, I couldn't help looking at my camera and wailing. I had my laptop with me, too, but all attempts to contact Howard failed. Of course, several e-mails that merely said, "Directing. Things have fallen apart. Help!" probably couldn't have elicited the sort of help I needed.

Then, as if in a coincidental scene you'd only see in a movie, a teenage kid who was shopping said, "You need a camcorder? I've got one at home. It's not fancy, but I think it'll do the job."

At this moment, another bit of wisdom came back to me, courtesy of screenwriter, David Koepp. One of the things he told me about working with Howard, was his openness to his collaborators' ideas.

"Even though Ron has his vision for the film," said Koepp (author of The Paper and Spider Man), "he's definitely willing to hear your suggestions. If he likes them enough, he'll incorporate them." 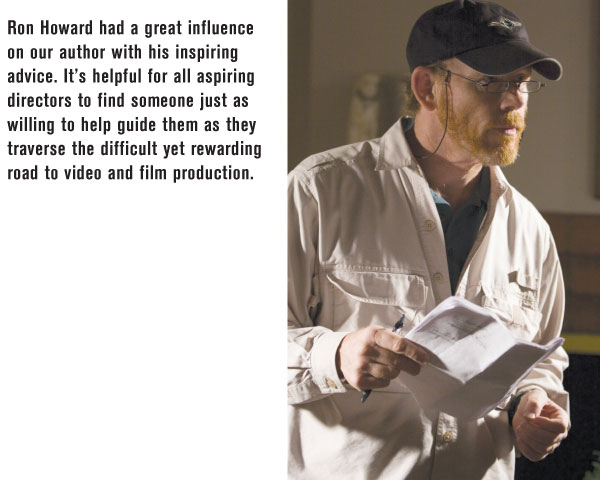 Taking a page again, from Howard, I thought, 'I like this kid's idea!' I said yes to him. And please, hurry! I spent the next ten minutes furiously drawing some new pictures on the back of an invoice, Janey gave me.

The teenager, Marshall, was soon back with his camcorder. My next challenge? The camcorder was the still-controversial Flip. Which has been compared to more expensive camcorders as the lowly cell phone. Nevertheless, I grabbed it from Marshall and told the store's customers to mill around naturally. Acting like a real director, I then asked Janey to give me a bit more overhead light. And started shooting. Hoping the finished product wouldn't look too weird.

Happily, there was none of that. The Flip had 60-minutes of recording time, really good resolution (1280×720) and the sound quality was impressive. I did three unbroken takes of Dylan singing his tune. Then I shot some great cut-away stuff: a close-up of a tattoo that Dylan has on his forearm, some whispery customers and some classic jazz album covers. All to cut into my video a bit later.

The Next Shoot is always Better

After four hours of shooting, I loaded the footage onto my laptop. Amazingly enough, two takes of Dylan had enough well-lit, nicely-framed sequences to keep and edit together later, which was a good thing. I thanked my teen savior, Marshall, and told him he could be in my next film.

Currently, I'm editing my video of Dylan Connor. But my Connecticut patron saint, Ron Howard, and his advice are still very much in my head. Especially, as I think about shooting my next film, a comedic short.

"When I showed one of my producers from Happy Days, my rough cut of Cotton Candy," Howard once told me, "he said something funny, but instructive. He said, 'Ron, we really like the look of the film.'

Then, he added gently, 'But we'd really like to see what you do next time. With someone else's material.'"

I've taken this bit of advice and am using it toward my own ends. In the video I just directed, despite my visual ideas and my take-charge attitude when my camera went haywire, I was using Dylan Connor's song as the basis for my shoot. The next time, I'll be using someone else's material. In other words, mine. For this, and so many other fine ideas, I have only one guy to thank. The guy whose voice plays in my head when things go awry and I get panicky. Thanks always Ron. And hey, let's do lunch sometime.

Peter Gerstenzang is a screenwriter, humorist and director. He is currently editing his rock video of Dylan Connor and circulating his scripts "True Detective," and "Personality Crisis."