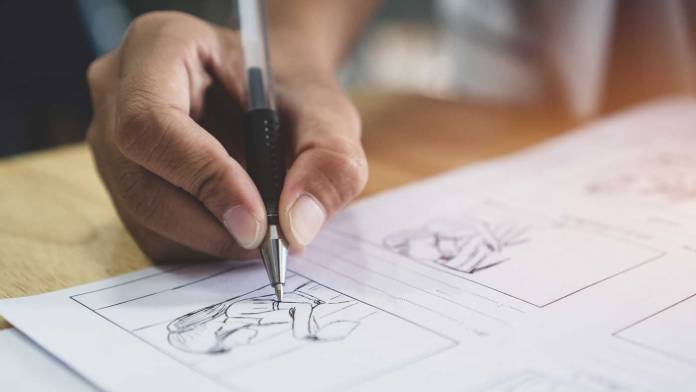 Script creation is a task that requires lots of time, work and planning. In fact, planning is probably the heart and soul of the production. The proper planning and legwork must be accomplished or even the best script will fall flat on its face.

There are many aspects to pre-production planning, but we’re just going to focus on two of them here: the storyboard and the shot list. If you’re working on a small production, then you might get to do everything yourself! If you have much of a budget, then some of this planning can be done in conjunction with other members of your crew.

Your first planning tool, the storyboard, is essentially a comic book of your production. It covers all the major shots, angles and action involved in the script. Think of it as shooting your movie on paper instead of tape. Shot by shot, you draw out the script and decide how to visually compose each scene.

Why is this so important? Because now you know how your shots work together. No jump cuts or bad angles to surprise you in the edit bay. You are also assured that you have adequate coverage of each scene. Storyboarding allows you to maximize both your time and your resources when on set – and that amounts to saving money. The storyboard helps bring out ideas and find trouble spots in your scenes.

There are many options available for storyboard creation. In its simplest form, you can draw one with stick figures on a notepad. Perfect for a quick and dirty board that gets the job done. Another option is advanced storyboarding software which can create an animated 3D previsualization that almost feels like a movie itself. This fits the bill when there’s a client involved that you want to impress. And if money is no object, you can hire a storyboard artist, just like Hollywood directors do.

Before you begin the storyboard, study your shooting locations in detail. You might even bring a camera and snapshots of potential angles. This type of scouting work will give you a better idea of how to compose the shots on paper. The camera is also a great tool for creating a basic storyboard. Bring a friend or two along as talent and use your camera to capture all the angles and positions. Load the pictures into a PowerPoint presentation and then play the presentation to see how it all flows.

To create a storyboard on paper, put two rows of boxes on the page with ample space above and below each row for making notes. Make sure your boxes are roughly the same aspect ratio you’re planning to shoot with. Have lots of copies of your blank boards – you don’t want to run out! With your script in hand, sketch each scene, using multiple boxes to capture all your intended shot angles. Critically examine the finished product, looking for gaps in shot coverage or problematic setups. And don’t forget to use a pencil so you can easily erase and redraw.

While your storyboard isn’t expected to be a work of art, there are a few standard conventions that will make it more understandable to others. Indicate a zoom or dolly in the frame by putting a floating box around the telephoto position. Use arrows pointing in or out to indicate the zoom’s direction. Use single arrows to communicate movement. Show the direction of a pan or tilt by drawing the beginning and ending in two separate frames, then putting an arrow and a directional notation to make the action clear, ie, “pan right”.

While your storyboard isn’t expected to be a work of art, there are a few standard conventions that will make it more understandable to others.

As you draw, use the space around each frame to make notes on camera action (“Tilt up”) or script notes (“Lucy dances around the car”). Also keep a notepad off to the side where you keep track of needed gear, sound effects, props, make-up, special effects – basically anything and everything needed to pull off the scene should be included in those notes.

Previsualization software takes your planning to the next level. By creating 3D worlds and models to inhabit them, you’re able to see the way those notes you made on camera and actor staging play out. There are two great benefits to this type of storyboard. One – as previously mentioned, it makes for an effective client presentation. They can easily grasp how your concept will really work. Two – it can help you better visualize complex sequences that are hard to draw on paper. Check out the Buyer’s Guide in this issue for specific recommendations on software.

When you’re finished with the storyboard, move on to planning your shooting strategy. The scenes in your script may each call for multiple camera angles. If you are filming with a single camera, shooting these in linear order is probably not the best choice…unless you enjoy constantly changing your camera and lighting setup. Instead, squeeze all you can from each setup by making use of another indispensable planning tool, the shot list.

In a nutshell, the shot list groups similar shots together so that you have an efficient shooting schedule. Prepare the list by looking through a scene’s storyboard and noting which frames can be captured during the same setup. Write them together on the list. Then use your list as a guide, and check off shots as they’re captured. You’ll protect yourself from overlooking an important close-up or establishing wide-shot.

Another benefit of the shot list is in creating a schedule. You can get a rough picture of how much time it will take to capture a scene as you plan out the various setups. It also allows the crew to easily follow along with what’s needed next. For example, by looking at the list, they can see that there are only two shots left in this setup, so it’s time to begin preparing for the next setup.

The Art of Practice

If you don’t have experience with storyboarding and shot lists, then give yourself a practice run. Watch a scene from a movie, TV show or commercial. Keep your remote next to you, and pause every few seconds to make note of the camera angle changes, screen action and even what gear might have been used in the scene. Then pull out your storyboard paper and draw a few minutes of the scene.

Working from your practice storyboard, write out screen action and camera movement notes. Then create a shot list based off the storyboard. It’s a lot of work, but it can help you get your mind around all the planning that needs to be done before your production can get off the ground.

Lighting, camera work, editing – they’re all good skills to learn. But don’t forget the skill of planning. At the end of the day, it’s an investment of time and energy that’s just as important as your technical prowess.

Find out about various storyboarding and scriptwriting software available.

Julia Camenisch is a freelance video producer and writer.