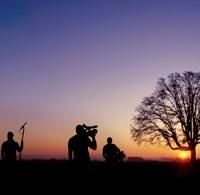 Considered an art form by many, documentary video production has its own special challenges and rewards. In this second of three parts series on how to make a documentary, we’ll explore how to plan your approach, find your subject and begin the process of bringing your vision to fruition.

Once you’ve chosen your topic for your documentary, you still have many choices facing you. How do you want to approach your subject? Will your documentary seem to have a passive feel? Will the story be told by the people who are interviewed as the story comes out in their own way, or will an aggressive interviewer (e.g., Michael Moore) drive the interviews, or will you mix interviews with written narration to be delivered in voice-over? Will your documentary be a balanced view of an issue where both sides are equally and fairly explored? What criteria should help you make these decisions?

Whose story is it really? You can choose to not have a "voice" in your documentary and make it "news" style and as impartial as possible, or you can chose the individual or group that is most affected by your story and let it be their story. This doesn’t mean you can’t explore both sides of an issue; it just means that you are going to put a real face on one side of the issue and allow them to personalize the story. A compelling documentary should not only be factually correct, but it should be engaging and emotionally compelling. You can also personalize both sides of a story. We have said for years in the advertising business, "don’t just sell the steak, sell the sizzle." Find the sizzle in your story, because that is what is going to eventually get you distribution, and remember that even a personal story should have some universal appeal.

Never take sound for granted. Nothing ruins a video that is shot on a budget quicker than bad sound. I always fight to get a sound person who is solely responsible for sound, because it is that important to me. If we truly can’t have the extra body, I will listen for sound as I direct, as I don’t feel a camera operator can split his attention well enough to both shoot and listen effectively at the same time. That said, there have been times when I have both shot and monitored sound; you just increase your percentage chance of having a problem. Use a lapel mic on the person you are interviewing and if possible put a pole mic on the other channel right out of your shot. Blending these two microphones together in post will give you a rounder and fuller sound. If you only have access to one mic, make sure the sound is as pristine as possible. Listen to the room before you shoot and turn off air changers if you can. Also take the time to record room tone (everyone sitting in the room making no noise for 30 seconds) or outside ambient sound, as this will help your editor remove background noise in post.

If you don’t know the camera well, you can probably survive mostly on factory settings. You do want to be aware of the iris setting and watch for backlight that becomes overwhelming. Always white balance every time you change locations. When in doubt, keep your shots simple and clean. As you gain confidence you can shoot "walk and talks," but when you’re just starting out, find a safe pretty environment to shoot.

I rarely have a subject speak directly to the camera. Unless they are doing a direct appeal to the people watching the video, they should not speak directly to the lens. Sit directly next to the lens, either to the left or right with your eyes at the same height as the lens, and have them speak directly to you. Don’t feel like you have to just jump right into the subject of the interview. If you don’t know them, spend some time getting acquainted. Ask about what they like to do. Find out who they are and then lead them into the subject you want. The cheapest component of your project is the videotape, so let it roll. This is a technique to make them feel more at home in front of the camera, but sometimes you also discover gems you didn’t think you’d find. Also, listen! Don’t be so wrapped up in the questions that you have planned to ask that you don’t listen to what is actually being said. Ask unscripted follow up questions and closely explore their reactions. Let them control some of the content of your interview. Be very open to finding a surprise and letting it blossom into something wonderful.

Keep track of everything your interviewer says and keep in mind possible B-roll shots that could highlight this dialog. A-roll is when the camera is on the subject and the words are coming out of their mouths. B-roll is footage without sound that is shot to break up the talking head portions of an interview and is inserted in place of the talking head during the postproduction process.

Documentaries many times rely on old pictures or licensed stock footage, but those elements can be expensive even for smaller projects and the licensing can limit how and where you can show the finished piece. Reenactments are a way to create footage that can help fill the needs of the project. If you are doing a piece about the 60s, you can find old civic buildings that still look as if they are in the sixties. Go to someone’s attic or to a thrift store, locate appropriate wardrobe, and create your own footage. You can pull this footage into sepia tones or make it black and white in post. You can blend this created footage with the old photos you can find and it will give the piece a sense of movement.

Discovery in the Moment

If your documentary is taking a person back to an event or a moment that changed his/her life, if you can afford it, don’t just talk about it but go there. Shoot the first time they see this place after so many years and let them just describe what and how they feel. If there is a significant person who helped them at one time, don’t just talk about it, shoot them meeting again, and get the energy of that exact moment.

Every documentary should begin as a blank sheet of paper or a canvas to paint upon. What colors you use and what format should come from a combination of you as an artist and the content of your story. Content should always dictate form, but you are in this equation as well and it will be your passion that drives this project. Five filmmakers could attempt the same topic for a documentary and each would most likely create a piece that only resembles the others by subject matter and that is as it should be. Find what excites you, then find your own means to express it.

Documentary filmmaking is the art of telling real stories in imaginative, entertaining, and insightful ways. A documentary can retell an old story with a new twist, or present a never before heard of issue, person, place, or event that has universal appeal. It can be fair and impartial, presenting both sides of a split issue, or pure propaganda. A documentary provides its audience with an intimate look into the lives and worlds of the people and places captured therein. There are documentaries that explore major historical events and ancient civilizations, documentaries that take us from the bottom of the ocean to the top of Mt. Everest, works that can show us the lives of a local quilting group, or teach us to ride the most powerful and impressive ocean waves. Documentary filmmaking is about finding a subject that you are passionate about and using the medium of video/film to share that passion with a larger audience. The key to finding a good subject for your documentary is starting with a personal experience or opinion that you know is shared or opposed by others, and finding a way to educate your audience about that subject in an entertaining and thought provoking way.

Share the Dream. Distribution: How do you get that video seen? First you should determine Who is your audience and Where they will most likely go to view your Masterpiece.

How to Make a Documentary – Part 1