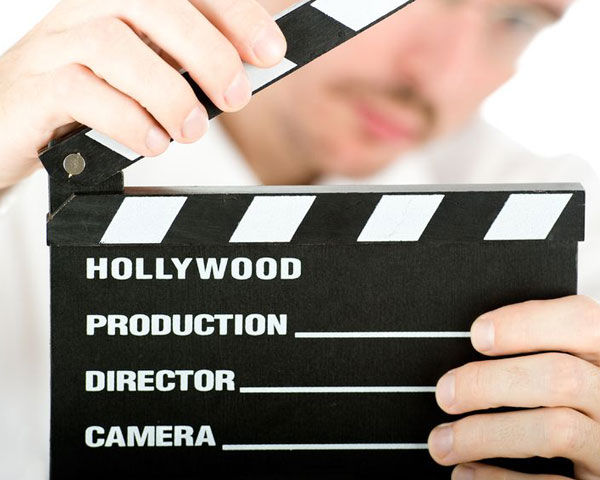 Tinseltown. The Silver Screen. The Biz. Catchy nicknames that no doubt further the entertainment industry’s reputation as a source of untold riches for those fortunate enough to slip a foot in the door. A reputation, as any self-made filmmaker will tell you, that is about as authentic as most of the pouty lips and cup sizes that grace said silver screen. Hollywood is one of the largest sources of legal revenue in the entire world. Yet although it takes many hands to keep such a prodigious industry afloat, the distribution of wealth is overwhelmingly disproportionate. Here is a brief list of ten of the most lucrative jobs the Biz has to offer (in no particular order).

Entertainment Lawyers are an integral part of the modern entertainment machine. With a barrage of media types influencing film/video projects from every direction, copyright laws and rights management quickly become an overwhelming obstacle for the typical independent filmmaker. YouTube and other free online streaming sites have put a limitless amount of material at a filmmaker’s fingertips, and it takes a qualified media attorney to help one obtain the proper releases needed within a project’s budget if a filmmaker chooses to use”free” media for profit purposes. Entertainment lawyers also are essential to brokering distribution deals with established distribution companies, as any legitimate distribution company requires a long list of complicated deliverables that can be confusing to deliver without the proper guidance. Entertainment Lawyers can expect to earn $40,000/year on the low end through $200,000/year and up, depending on law firm and clientele.

The new digital shift in production has garnered the need for affordable production support on the indie scene, and many business owners have opened boutique “mom and pop” studios to fill that need. Small warehouses, old buildings, and even converted residences have become home to the thousands of shorts, web videos, music videos, and features shot every year. Accordingly, each site typically has its own set of characteristics, and thus productions are increasingly in need of qualified site representatives, or studio managers. Similarly, small post production houses offer affordable post workflow options for low budget productions, and often small business owners are willing to negotiate a rate more than a more established facility. Small business owners can make a varied range of income depending on their region and the type of services they offer. Site reps can expect to make anywhere from $20 – $30/hour, depending on venue.

Animal Trainers possess very special skillsets that require proper education and experience to perform successfully. Liability is much higher on projects involving animal performers as even the smallest incident can unexpectedly set production back with a major delay, or even worse, cast or crew can be seriously injured. Thus, an experienced animal trainer can be an indispensable resource to a production utilizing animal performers on a routine basis. Some entertainment animal trainers are private pet owners that branch out into entertainment services as the base pay can start around $48,000/year and go up substantially, depending upon the size of the animal involved and the demand for animals of that nature.

The volume of media circulating over the past twenty years has increased exponentially, and the rapid growth of online news sources has created a strong need for qualified journalism covering entertainment news. Media reporting has become a legitimate source of income for many reporters in the field and online. The proliferation of shows such as “TMZ,” “Entertainment Tonight,” “The Insider,” and “Access Hollywood” have turned entertainment media coverage into a form of entertainment in itself, and has made minor stars out of the very reporters covering the stories as well, such as Harvey Levin and the TMZ crew. Harry Knowles and Eric Vespe of Ain’t It Cool News have turned what began as an ordinary movie fan site into a powerhouse of insider entertainment news and have made a respectable living out of their love of everything media. Estimates for how much an entertainment reporter earns varies greatly by outlet and discipline, from a few dollars per online article to Matt Lauer’s $16 million/year salary on The Today Show.

Certainly one of the fastest growing positions of the past twenty years has been the CG Artist/Animator role. Ever since the early 1990s when digital effects pushed optical effects back into the dark ages, computer generated effects (CGI) has been the industry’s preferred method of bringing visual effects to life. Much easier to manipulate than practical make-up effects and less time consuming than stop motion, the digital revolution has created a major appetite for qualified digital artists for companies such as Industrial Light and Magic (Transformers and Harry Potter franchises), Digital Domain (Titanic, The Curious Case of Benjamin Button), and Weta Digital (Avatar, Lord of the Rings and X-Men franchises). CG Artists can expect extremely long hours and technically complex prerequisites, but the base pay runs around $37.63/hour according to the Animation Guild Local 839.

There’s an understanding in the industry that the Academy Award for Best Editing is a subjective award at best, as the only people who really know what the Editor has accomplished is the Director and the Editor himself/herself. This is due to the fact that if a mediocre editor is handed amazing raw material to work with, chances are, the final project will probably tun out pretty good. Yet if an amazingly talented editor is given shoddy raw material to edit with, the final project may turn out poorly, but the editor may have performed minor miracles just to get the project watchable. Editing is the most important stage of a project’s development aside from principal photography, and accordingly, an editor has tremendous influence over the success of a film. A great editor must not only be technically proficient, but must also have a good sense of timing, understand tone, and know how to carve a good performance out of poor raw material. It’s common for an editor to spend more time on a project than anyone else involved except for the Director. Editors are a special breed of talent, and can expect to earn a base salary of $2,957.15 for a five day week on feature films, and reality show editors can earn anywhere from $30,000 – $35,000/annually. Famous editors such as Thelma Schoonmaker (Raging Bull, Casino), Martin Scorsese’s preferred editor since 1967, command much greater salaries.

A solid Art Director knows how to take a weak script and make it into a great project via amazing production value, and can enhance a good script into a project that is truly amazing. Along with the Director and Director of Photography, the Art Director is one of the main creative forces behind establishing the look of a project. The job requires a huge time commitment, and often is overlooked by the casual moviegoers for the more visible roles such as Director, Producer, or D.P. The I.A.T.S.E Local 800 Art Directors Guild lists the minimum weekly rate for an Art Director at $2,663.39/week for personnel in their first six months in the industry and $2,954.83/week after the initial six months.

Both lauded and abused, the Screenwriter suffers a rather volatile lifecycle in the Biz. Many bounce around the system for years, barely able to make rent off selling their scripts, while others seem to hit it big overnight. Writers such as Charlie Kauffman (Eternal Sunshine of the Spotless Mind) and Paul Thomas Anderson (There Will Be Blood) frequently command a great deal of control over their projects as they are widely regarded as some most unique talent the industry has to offer, yet are strangely absent from the top-paid screenwriters list. Unfortunately, originality doesn’t guarantee an appropriate salary for most screenwriters, as some of the biggest script paydays have gone to writers such as Roberto Orci, Alex Kurtzman and Ehren Kruger for Transformers: Revenge of the Fallen ($8 million), Terry Rossio and Bill Marsilii for Deja Vu ($5 million), and Michael Chricton and Ann-Marie Chricton for Twister ($2.5 million).

Few titles are as mysteriously unspecific as “Producer” on a project. Producers run the gamut of the hardworking beast of burden that keeps a project from burning to the ground, to the pay-or-play actor’s personal assistant that did little more than get the star’s kids to soccer practice on time. There are many subsets of the Producer ilk, but the most common usage of the term refers to the main creative force that manages the project from inception through completion, producers such as George Lucas (Star Wars franchise), Walt Disney (Pinocchio, Fantasia, Sleeping Beauty), Jerry Bruckheimer (Pirates of the Caribbean franchise), and Don Simpson (Top Gun, Beverly Hills Cop franchise). Many of these filmmakers started out as hands-on producers early in their careers and eventually transitioned into the more supervisory role of Executive Producer as the number of projects they developed grew. Producers typically bring home a sizable chunk of a property’s profits, as Steven Spielberg (Transformers franchise), Jerry Bruckheimer, Tyler Perry (Madeafranchise), George Lucas, and Dick Wolf (Law & Order franchises) all made the Forbes’ Top 21 Highest Paid Celebrities List, 2011.

Arguably the most important, and oftentimes most visible position on set, the Director typically takes all the credit when a picture comes out well, and shoulders the blame when a picture fails to deliver. Directors are responsible for managing the essential creative aspects of a project , and usually have significant influence on casting and hiring key personnel. Directors work closely with the Producer(s), Director of Photography, Art Director, Editor, and Composer to synthesize the artistic vision of the project. Certain directors such as Steven Spielberg (Jaws, Raiders of the Lost Ark franchise, Jurassic Park), James Cameron (Avatar, Aliens, Terminator franchise), Martin Scorsese (Taxi Driver, Goodfellas, The Departed), and Chris Nolan (Dark Knight franchise, Inception) can pull in audiences based on their body of work alone. The role of the director is so fundamental to a project’s success that director salary is often second only to what the principal actors earn. Director Michael Bay made the number two spot on Forbes “Highest Paid Celebrities List 2011” for his haul on Transformers: Dark of the Moon, for which he made a staggering $160 million due to combined revenue from box office receipts, a percentage of movie tie-in toy sales, and his involvement with the new Transformers: The Ride theme park attraction at Universal Studios Hollywood.

The entertainment industry remains one of the world’s top revenue streams, and the sheer amount of content produced each year makes it possible to make a living performing a number of industry-related jobs. Despite the sizable box office receipts brought in each year, only a handful of positions pay a proportionate salary to the net profit a project earns. Some of the highest paying entertainment jobs include directors, producers, screenwriters, art directors, CG artists and animators, editors, reporters, business owners, reporters, and animal trainers. Many of the figures in this article are base salaries according to union guidelines, so the amount one can expect to earn for a similar role is negotiable and not guaranteed.

Rory Walsh is an independent writer/director.