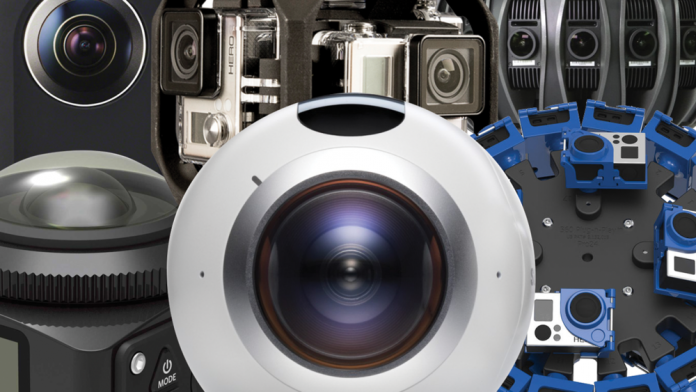 So you’re thinking about jumping into spherical video? You’re in good company. Spherical video is rapidly becoming popular and is the logical next step for people who want to view immersive content. But what do you need to start creating content? How many clams do you have to shell out to jump into the spherical game? It’s the obvious question, but like all camera setups, it greatly depends on the quality you want to produce and the time you have to spend on the video.

Now, you don’t have to drop a fortune to start shooting spherical video. In fact, there are dozens of consumer and prosumer level solutions to get your feet wet. There are rigs which are great for the vlogger, real estate agent or anyone who just wants to toy around with the technology. Consumer level spherical cameras do a lot of the hard work for you, they’re basically point and shoot cameras. No need to do any stitching in post. Don’t know what stitching is? Don’t worry, we’ll get to that.

One affordable spherical video camera is the Ricoh Theta S at about $350. When paired with your smartphone, uploading spherical content straight to social media is a snap. Because the Theta S was one of the earliest consumer spherical video camera models, the image reflects it. The video does not look anything close to the high definition video you are used to viewing.

The next most popular spherical camera is Samsung’s newly released Gear 360. It’s priced at about the same as the Theta S but is a much easier camera to use and the image quality is a huge step up. While the Theta S records in HD, the Gear 360 records in 4K. The user interface of the Gear 360 is simple and easy to operate though the ball shape of the unit has some ergonomic issues.

One of the best spherical video cameras in the consumer price range is the Kodak PIXPRO Dual Pro Pack, it’s a bit more expensive at $899, but the image is terrific. It’s much clearer than the Samsung and is borderline professional. There is a downside however; this is not a single all-in one spherical camera like the Theta S or Gear 360. It’s two Kodak PIXPRO’s back to back. The PIXPRO is Kodak’s action camera, and it’s decent, but being that it’s two separate cameras housed back to back, you must stitch the two images together yourself, adding time to your post-production workflow. The Kodak PIXPRO Dual Pro pack, however does come with software to make the process easier.

Stitching? What the heck is stitching? It’s exactly what you think it is; multiple camera images attached to each other to form a 3D sphere. We don’t mean stereoscopic 3-D, though that is an option with some rigs. Here, we’re talking about an image you can pan and tilt around as if you were inside of it. This effect is accomplished through stitching together footage from multiple cameras all dedicated to capturing a different direction. In post, special software allows you to take those different angles and stitch them together to form a single image. This presents several problems if you’re not careful. The biggest of these issues are people and objects not lining up correctly, making the seams obvious or causing people and objects to just disappear. This can happen due to the software, or it can occur by not lining up all the cameras correctly. It's also super important all the cameras are set up with the same settings: the same color temperature, shutter speed and ISO. You want your spherical video to look the same across the whole image. This is why rigs become vital to multi-camera spherical video production.

When it comes to professional multi-camera rigs, by far the most popular setups are multi GoPro rigs. This is in part due to GoPros affordability — half a dozen cameras gets expensive really quick. GoPros are also very small, thus keeping your rig size smaller. There are several companies making these multi-camera rigs for GoPro, the most popular being Freedom360 and 360Rize. The rigs themselves are very simple, most are 3D printed and just house three or more cameras depending on the size and complexity of the rig. They range in price from a couple hundred to a couple thousand, depending on the setup.

The GoPro Omni takes this a step further by keeping all six of its cameras in sync and giving you the option to power them from a single battery source. Though the $5,000 price tag may seem steep, this includes the rig, cameras and software, making this a great out-of-the-box solution for those who want to step up from the all-in-one consumer solutions.

When you move beyond the GoPro rigs, the setup becomes a bit more complicated and there are very few premade rigs for other cameras. High-end productions using DSLRs, mirrorless cameras or cinema cameras usually use custom-made rigs. This is in part due to the “newness” of this kind of shooting as well as demand. The GoPro is insanely popular and cheap, but it's just not practical at this point for companies to be manufacturing rigs for each kind of DSLR or mirrorless cameras.

To make things more complicated, spherical video rigs can be broken down into two categories, standard monoscoptic and stereoscoptic — 2D or 3D. In this case, we do mean 3D as you're used to hearing it. Stereoscopic 3D rigs require twice as many cameras, a camera for each eye from each prospective. You can bet the price gets pretty steep at this point.

When it comes to stitching the images together, the most popular program is Kolor which was recently purchased by Gopro, though at about $650, it’s not cheap. Another popular option is Video Stitch Studio, which is even more expensive than Kolor at about $745. A cheaper but more difficult solution would be to use a plug-in for After Effects such as Skybox Studio, currently priced at $189. It is a whole lot less user friendly than stitching programs, but you have a lot more control over the image. Plus, Skybox can also be used to composite text and other basic objects into your scene. These programs work well and make your job easier, but the price can be a real hurdle if you're just getting into the game — something to consider when choosing between an all-in-one solution and a multi-camera rig. Here, you’ll need to balance affordability and ease of use with image quality.

If you are already cutting 4K videos or producing motion graphics or visual effects, your system is likely already up to snuff.

Processing special video takes some computing power, beyond a decent processor and a bit of RAM, you will need a good graphics card with at least a minimum 2GB dedicated RAM. If you are already cutting 4K videos or producing motion graphics or visual effects, your system is likely already up to snuff. If not, this is another consideration to take when choosing a spherical video camera or rig.

A Time to Experiment

We encourage you to at least give spherical video a try with a consumer level camera. Get out there, shoot with it, capture behind the scenes content of your projects, have fun and upload it to social media. The technology is brand new, so it’s the perfect time to experiment and have fun with it. Plus, Facebook has spherical video built-in, all you have to do is upload to your timeline and they do the rest.

If you want to start shooting spherical professionally, take a step back and think about it — not only is this going to be a large investment in software and equipment, it’s an investment in time to processes the videos. If you’re up for the challenge, however, the right tools are available.

Jason Miller is a Senior Marketing Producer, filmmaker and unapologetic nerd whose work has been seen in feature films and national marketing campaigns.