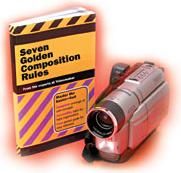 Composition is such a powerful visual tool that we give it a lot of attention here at Videomaker. It’s such a complex art that folks like Rembrandt and Ansel Adams practically made a career of it. (For our latest in-depth look, check You’ve Been Framed in the July 2001 issue and the Videomaker Web site.) Is composition, then, too sophisticated for the casual shooter?

You don’t need a home-study course in composition. All you need is a cheat sheet: a few simple reminders to guide your shooting something like Videomaker‘s infamous Seven Deadly Camera Sins. So let’s name our new list, The Seven Golden Composition Rules. If you can remember, and use, the first four, you’ll frame very respectable images. If you can add rules five through seven, you’ll see dramatic improvement in your compositions. We’ve assembled The Seven Golden Composition Rules into a handy checklist. Here they are, explained briefly and painlessly.

1. Look at the Viewfinder

Above all, use your viewfinder as a surface (like a photo or painting) you look at, instead of a window you look through. All composition creation takes place on that surface and within that two-dimensional frame. By squeezing the three-dimensional world down to two, you reduce real people and things to elements that you can deploy to create nice compositions.

If your camcorder has an external screen, use it all the time, except in light too bright to see it. If you have only an internal viewfinder, remind yourself that it’s not a through-the-lens view; it’s just a screen a tiny television. At first, you may just have to trust me that this is the most important rule of all; but as you get used to seeing the finder as a flat picture, you’ll understand why this is the first of The Seven Golden Composition Rules.

2. Divide the Frame into Thirds

By now, you’ve heard the famous Rule of Thirds: divide the frame into nine equal parts with an imaginary tick-tack-toe grid. Next, compose your images so that prominent elements (like subjects’ eyes and horizons and trees) align, more or less, with the lines, while the most important ones of all fall on or near grid intersections. This rule is easy to apply and it works every time. (If you feel ambitious, make the Rule of Thirds screen overlay detailed in the July 2001 issue and practice with it.)

Understand that you don’t have to have elements along all the lines and at every intersection, as long as your image’s components at least roughly line up with the grid.

That doesn’t mean a composition is automatically defective if it doesn’t follow the holy Rule of Thirds; and yes, many beautiful compositions ignore this rule entirely. The Rule of Thirds is actually less a rule than an approach: organizing the frame asymmetrically, can guide you toward composing more interesting images.

Beginners often frame subjects with their eyes too near the center of the image, leaving far too much room over their heads and creating seriously clunky compositions. (Seven Deadly Camera Sins refers to this as "head hunting.") In any shot from big closeup (eyes to chin) to full shot (head to foot), keep the subject’s eyes on or above the upper horizontal line of the tick-tack-toe grid. Obviously, the rule doesn’t apply to wide shots, where the subjects are relatively small.

And, as long as we’re here, a quick bonus tip: in big closeups, you can cut off the tops of people’s heads, but not their chins. No one quite understands the psychological reasons for this, but try it and you’ll see. A subject scalped by the frame is okay, but a chin that continues off the bottom of the image looks amateurish.

Try to place subjects in the frame off-center, toward the side opposite the direction they’re moving (or just looking, if they’re staying in one place.) Professionals call the former "lead room" and the latter "look room." In most cases, a subject moving or looking toward, say, the right edge of the frame, doesn’t need to be too far to the left just enough to open up some extra air ahead of them. (By the way, this rule extends to non-human subjects, like moving cars.)

Maintaining lead room has another advantage: as you pan with a moving subject, you don’t have to keep it identically framed if you allow it extra room to move in.

5. Use the Ends of the Lens

Wide-angle lens settings exaggerate apparent depth. Parallel lines rush together in the distance. Repeated verticals like phone poles shrink dramatically as they recede. By dramatizing perspective effects, wide-angle settings suggest ways to use them in your compositions.

To take just one example, diagonal lines make wonderful pointers that lead the eye from the frame edge to the center of interest. If you have a subject posed before a railing, move around to the side and frame a wide angle shot with the top of the railing swooping forward and out of frame. The strong diagonal will take the eye right to the subject.

Telephoto lenses offer very different possibilities. Because they suppress apparent depth, they remind you that you build compositions out of pictorial elements on a flat plane and inside a defining frame. To put it another way, long lenses turn volumes into shapes, and shapes are the raw components of graphic design.

As an experiment, try zooming to full telephoto and then spending half an hour creating compositions on the picture plane. (Obviously, this exercise works better outdoors.) You’ll find all kinds of possibilities in the strange Flatland you’re framing in your finder.

One caution: there’s no point in using the digital zoom feature on your camcorder because it does not make the lens setting "more telephoto." Digital zoom works by electronically enlarging the center of the image.

After wide and telephoto lenses, the next big sources of great compositions are unusual angles especially high and low ones. Most amateurs walk around looking at people and scenes. When they spot something to shoot, they raise the camcorder to eye level and blaze away. The resulting angles of the footage are always the same.

This practice was defensible before external LCD viewing screens; but today you can hold the camera high above your head with the screen tilted down, or walk along with your rig a foot above the ground.

High angles are indispensable in crowd situations. I recently shot a parade by holding the camera high above my head with the finder angled downward for viewing. At the other extreme, since many casual shooters have small children, grandchildren or pets, low angles offer fresh perspectives on these wonderful sawed-off critters.

If you want to get really creative, you can make hand-held boom shots that look quite professional. To boom up from a very low angle to a high one, set your low camera position, using your free hand to hold onto the outer edge of the external screen. Now roll the shot and after a few seconds of the low angle, slowly and steadily raise the camcorder as high as you please. The trick is to continuously adjust the viewfinder as the camera rises, so that you can always see it clearly. To complete the effect, stop when you get a good high-angle composition and roll a few seconds more. This trick also works just as well in reverse, from high to low angle.

Finally, look for foreground frames in which to place the subjects of your composition. Windows, doors, arches, road overpasses any kind of opening large or small can enclose your image in a foreground shape that draws attention to the center of interest in the middle.

Compositional frames have two main uses. First, by emphasizing the foreground, they enhance the feeling of depth in the image. At the same time, they can fill out a composition that works great, except for all that empty sky at the top.

And there you have it. We hope that our seven golden composition rules will help you in your ongoing quest toward video perfection.