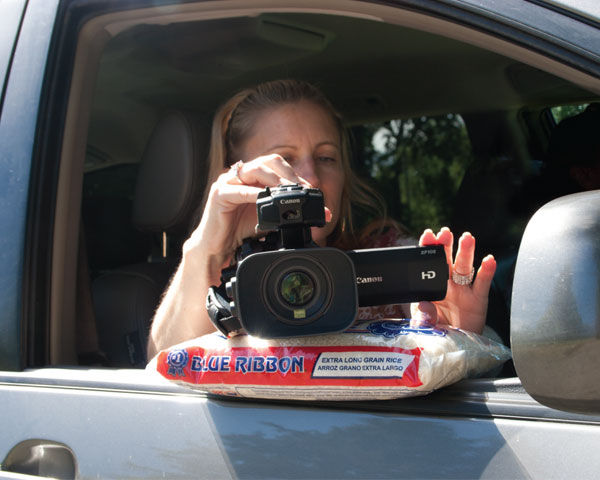 Film and video producing is a profession for which there is an awful lot of specialized equipment, but that doesn’t mean you have to have a huge budget to make high quality video. There are lots of items already in your house that can be re-tasked for video creation.

Want to get you camera high above a crowd? Or to peer into a birds nest? Steven Spielberg might use a crane for this, but you can mount a tripod head to a telescoping painter’s pole. These handy extenders can be used to get cameras or lights or microphones in places you may otherwise need a monkey and they usually range in price from $5 for a four foot model to $90 for one that will extend to 30-feet.

Many videographers shooting from the window of a car (possibly because they’re videotaping lions) will stabilize the camera on a bag filled with sand or lead shot. Why bother getting an extra bag filled with sand when you’ve already got a five-pound bag of rice in the kitchen? If you have multiple bags of rice (or potatoes) you can also use them to hold down the legs of lighting stands so the wind doesn’t catch your umbrella and blow it over.

Your Very Own Glass Bottom Boat 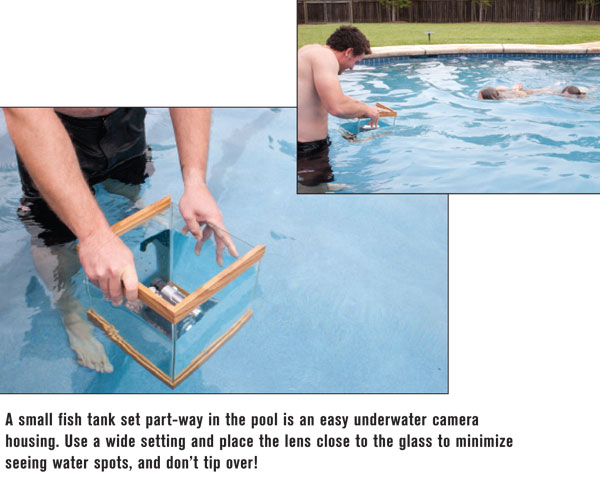 You can buy dedicated underwater housings for most camcorders that will let you take them into the pool or the surf but you can make your own camera’s diving mask by simply placing your camera in a small fish tank partially submerged in the water. You may want to wrap your camera in a towel first to protect against incidental splashes, but you’ll be able to get crystal clear video of people swimming underneath. You can also set it alongside your boat or canoe to get underwater shots of a lake, or action shots of junior netting his first bass.

It used to be that fluorescent lights were green and buzzed like steel bees and were a videographer’s nightmare. Not so anymore, with the improvement of ballast and the creation of a good daylight balanced bulb. This means that with the right bulbs, you can pull down those fixtures over your workbench in the garage and re-task them to light people. With some cardboard barn doors you can control the spill as well.

It’s not a big secret that you can go to your local hardware store and get a couple of 1000-watt work lamps and use them for video, but out of the box they don’t provide very soft light or an effective light kit. You can bounce them from walls or ceilings, but there are some objects in your house that you can use in conjunction with them to modify the light.

Light it with iPads! 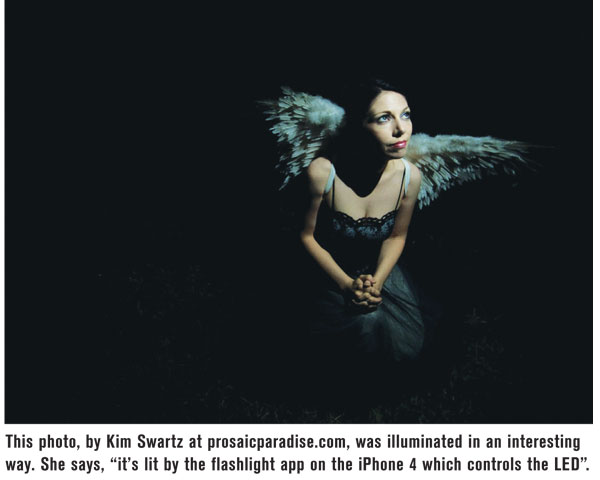 Director Michael Mann was faced with some unusual problems when trying to figure out how to light his 2004 movie “Collateral” which stars Tom Cruise as a hit man with a busy schedule. The biggest problem is that most of the movie takes place in a taxi at night – a notoriously under-lit environment. Mann didn’t have the space in the back seat of the cab to put traditional lighting but cleverly used lights made from the same material that illuminates laptop computer screens – this allowed him to put large sources of illumination almost anywhere. When trying to light in tight spaces, don’t neglect non-traditional sources of illumination such as your iPad, flat-screen TV or an old light box. Remember the inverse square law which tells us that if you double your light-to-subject distance, you reduce the amount of light hitting it to 1/4. This means with a low emitting light such as an iPad you’ll need to keep it very close to your subject.

Softboxes are wonderful things: they provide great soft light but they can be expensive. Hang a white bed sheet between two light stands and set your work lamps behind it to create a window light look even at night. 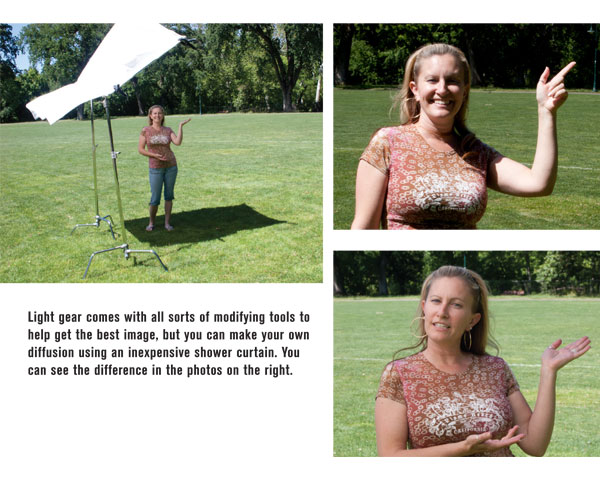 One big problem with mid-day macro videography can be the very harsh lighting of a directly overhead sun. Typically video producers would add a lot of light to counteract the drastic shadows, but you can also diffuse the light with a white translucent trash can or ordinary rain umbrella tipped up over the anthill or flower you’re recording. Translucent shower curtains are cheap and make wonderful diffusers for larger areas. Stretch one between the noon-day sun and your subject to turn a bright day into beautiful shade.

You can buy a fancy reflector like a Lastolite Tri-Grip or you can use anything white you have lying around the house – this can be something as simple as a white T-shirt worn by a crew member to a couple of sheets of typing paper being held by a grip, to large pieces of foam core gaffer taped together in a V.

Chinese lanterns are all the rage in video production these days – these round paper or silk balls, about 30 inches in diameter, throw beautiful even light over a huge area. They’re easy to get off the ground on a C-stand, hanging from a window or balcony, or by throwing a weighted string over a tree branch and hauling it above your talent. If using incandescent lights, be sure that you don’t exceed the recommended wattage for the lantern, but remember you can get the same number of lumens from daylight balanced tungsten using a lot less power. Be sure to cover the hole at the bottom of your lantern with a translucent material such as rice paper to keep it from turning into a spotlight.

In the film and video producing world a “gobo” is anything that “Goes Before Optics” meaning the light and the surface the light is supposed to hit, projecting a pattern on it. This pattern can be very exact like Count Dracula stepping into the razor sharp shadow of a cross lit by moonlight, or it can be an inexact and unknown pattern splashed on a wall in the background to keep it from being simply black, or it can be intricate like shimmering water. Gobos are a staple of film noir, which relied on very simple yet very dramatic lighting effects.

There are plenty of gobos that exist in your house, from lace doilies, to plants, to a sheet of aluminum foil with holes punched in it, to the spokes of a chair back – anything that is alternating solid and clear can be used as a gobo. Try setting up a light aimed at a white wall and experimenting with placing different patterned objects in front of it.

To get the effect of shimmering water on a wall, aim your light down into a pan filled with water so that it reflects up onto the wall. You can have a camera assistant slowly rock the pan to simulate water moving.

The more focused and more direct your light, the sharper and more distinct your shadows will be. Many professional hot-movie-lights are focusable, and this is one of the reasons why. A wide-angle spot is less useful with gobos then a narrow one (about 50-degrees being optimal). You could even use a slide projector to project sharp words or images onto a background. (“Happy Anniversary Mom & Dad!”)

When working creatively, it’s important to look for solutions rather than equipment – to be able to recognize you problems and look for objects and processes which will overcome them rather than running to a catalog to see what you don’t have. Sometimes you will need a crane to get a light where you want it, but very often you can make do with things you already have.

If you like this article, you’ll really like the DIY forum where you can share ideas with other readers. Have a favorite re-tasked household item? Let other people know about it here.