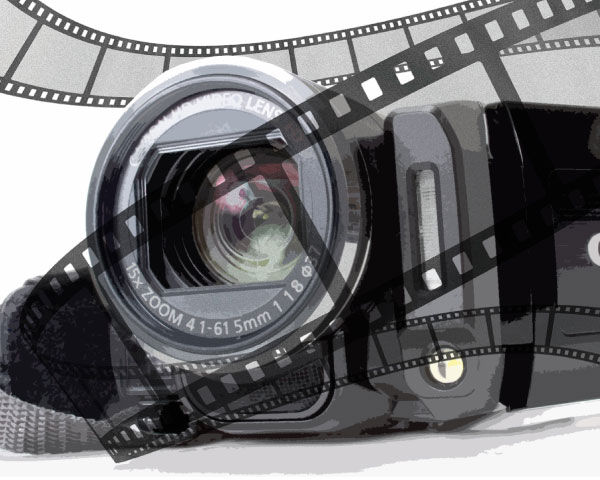 I’ve noticed that while watching the “Coming Attractions” previews on DVDs anything that looks like it was shot on video automatically gets bumped down on my “have to see this” list. Why is that? Growing up, as I did, in the age where home video technology first became available, I was both fascinated and put off by it. On the one hand it meant that anybody could now make movies, but on the other, they all looked very different than what was coming out of Hollywood – they looked cheap. Over the years, video technology has improved dramatically from the old VHS camcorders with their low resolution and low dynamic range. Today, even the most inexpensive HD camcorders are capable of producing very good images. But there’s still something subconscious that makes many people prefer the look of film.

Differences Between Film and Video 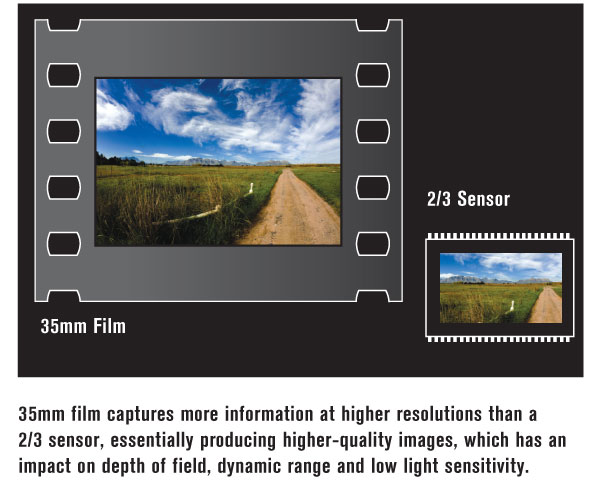 When we look at something and think “shot on video” what is it that we’re noticing? The differences between film and video used to be a lot greater – specifically in terms of the much greater dynamic range and resolution that film could capture. Over the past few years these have largely gone away and, in many ways, digital may actually be superior to film (though we can leave that battle to the Videomaker forum). What remains, though, is that most consumer camcorders have a very small CCD compared to the 35mm sensor which might have as much as seven times the surface area – this has a very real impact on the depth of field, dynamic range, and the camera’s low light sensitivity. 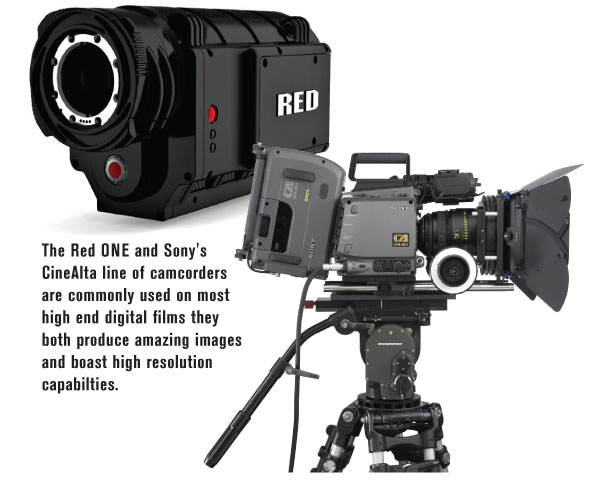 Film has a lot of unenviable qualities – firstly, it’s expensive. Remember how much it cost to buy and develop a roll of 35mm film? In a movie camera, that’s one second. Multiply that by two hours, multiple takes, positives made from your negatives and even the most miserly shooting will cost you thousands and thousands of dollars. Film’s second big drawback is that you can’t see it right away. You don’t know if your shot was in focus, what was going on in the background, any number of things that would make you want to re-shoot a scene. For these reasons, Hollywood has been very interested in figuring out how to shoot on video.

Commercially successful movies like Benjamin Button, Star Wars episodes 2 and 3 and Collateral were shot digitally and in 2009, Anthony Dod Mantle won a “best cinematographer” Oscar for Slumdog Millionare which was made up of 60% digital video. For the most part, these movies are using ultra high end cameras, like the Sony CineAlta line of camcorders or the Red One which will set you back $17,500 for the body alone, but other successful movies, like Open Water, were shot on prosumer equipment and put through filters to make it look more film like.

So what can you do with your consumer or prosumer video camera to achieve the look of film? Here’s a look at some software, hardware, and techniques.

Film is shot at 24 frames per second, video is typically shot at 29.97 frames per second. The reasoning behind all of this is arcane, but our eyes have gotten used to seeing “film” at 24 frames a second. Most HD camcorders today have an option for shooting 24 frames, progressive (“progressive” means one solid frame rather than the two interlaced fields we’re used to with NTSC). Blu-ray as well as most HDTV’s will support 24p playback, as will your computer.

Set Your Shutter Angle to 180 Degrees

“Shutter angle”, a holdover from film cameras, has to do with how long the light is hitting the film and how much motion blur there is when things are moving across the screen. Many camcorders today have an option for shutter angle. Setting this to 1/48 with a frame rate of 24 best approximates the look of a film camera.

Use a 35mm Lens Adapter

Anybody with a DSLR and an inexpensive 50mm f/1.8 lens can take images with very shallow depth of field, allowing you to blur out the background and concentrate on your subject. However, given the very tiny size of the CCD on consumer video cameras, your depth of field might be a dozen feet or more.

Companies like LetusDirect (letusdirect.com) and P+S Technik (pstechnik.de) make devices that will allow you to attach 35mm lenses to your camcorder and get the shallow depth of field often associated with 35mm film productions. They get past the small size of the CCD by projecting the image onto a screen about the size of a 35mm piece of film and actually video tape the image from that screen. It’s a bit like sitting in a movie theatre videotaping the screen, but it actually works.

Tiffen makes a series of filters they sell called “The Film Look Kit” for making video look more film like. They work by slightly reducing the contrast and sharpness. You could also use a slight diffusion filter which will soften the image a bit.

Companies like Boris FX (borisfx.com) Red Giant (redgiantsoftware.com), BigFX (bigfx.com), and Nattress Productions (nattress.com) sell plug-in filters for your editing software that give a variety of “film looks” from old and scratchy, to things like adding subtle grain and reproducing different developing techniques, to color grading. You can find many before and after examples of these filters on YouTube.com by searching for the name of the filter.

There are even apps for the iPhone like “Hollywood FX Video Maker” that will make video captured by your cell phone look more “film like”.

One of the first tipoffs to a low quality production is skimping on the lighting. Which doesn’t necessarily mean not spending money on the lighting, but using lighting that’s unrealistic in an uninteresting way.

I worked on a shot-on-video movie for two days in 2006. We were shooting a scene that takes place in an office and the director had borrowed an office which looked – very office like. The first thing he did was have production assistants remove all the pictures from the walls and everything off of the desk. Then he lit it with a giant bright light that threw razor sharp shadows against the bare wall. It looked like an empty room with a desk lit by a super bright bare bulb – because that’s what it was. In real life, nobody would light their office with a giant bare bulb. Had there been a real lighting expert on the set, they would have come up with a way to make sure the room was bright enough to be captured by the camera, but lit believeably.

Pay attention to lighting while watching movies and if you’re not a lighting expert yourself, call in some help before you start your own production. If your town doesn’t have a film and video group, you can try websites like Craigslist (craigslist.com) to meet other people interested in video production. 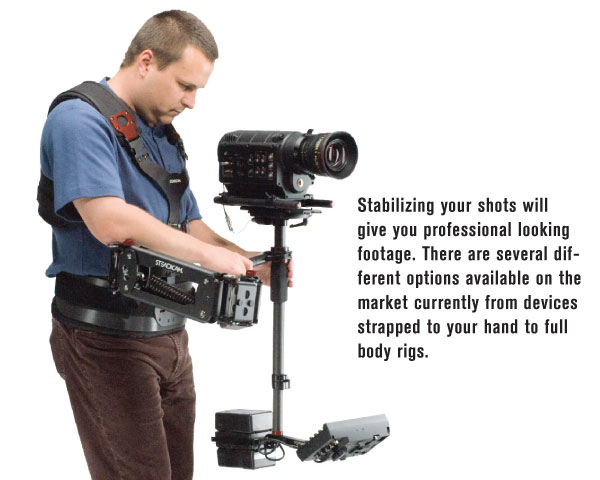 While the jerky hand-held camera is in style now, using a camera stabilizer will smooth out your handheld movements and add an air of professionalism to your production. Steadicam (steadicam.com) was the first camera stabilizing system, but today they’re made by lots of companies like Manfrotto (manfrotto.com) and Camera Motion Research (camotionllc.com) in a broad range of prices.

Video is no longer film’s poor quality cousin, though the two can still look distinctly different. We’ve been trained over the years to think that film looks more “professional” and for that reason there are a number of tools available to make video look more like film. Some of these are digital, some are physical, but one of the most important is the mindset – shoot your video professionally, carefully, and with attention to detail, just like any Oscar-winning cinematographer would do.