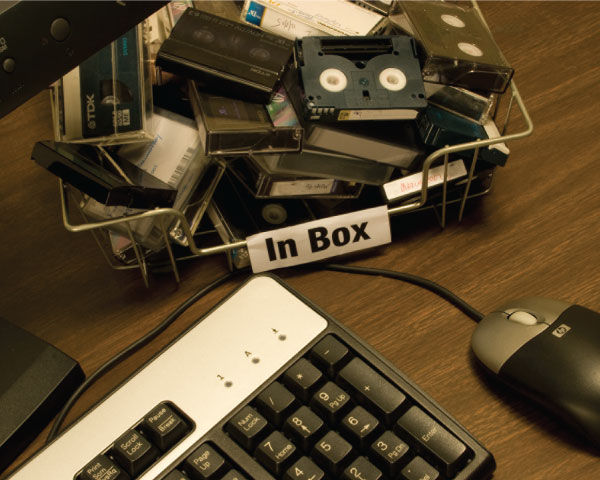 So you’ve got a camera and you’ve gone out and shot some video with it. Sooner or later you’re going to want to understand how to do Basic Video Editing.

Editing video is not as difficult as it may sound; a little planning up front will save you time and assure you satisfied viewers.
In any given trip to the zoo, you might shoot 45 minutes’ or an hour’s worth of video, about five minutes of which is worth watching. The quickest way to get your friends to eternally forswear watching your work is to show them your raw footage so you need to edit it.

Most camcorders sold today record onto either a built-in hard drive or removable memory cards that connect directly to your computer and mount like a hard drive, allowing you to easily transfer your footage. If your camcorder doesn’t – if, for example, it records onto DVD or even onto tape – then you’ll have another step between the camera and editing which will depend on your camcorder (you’ll need to see the manual for more information on that).

You’re going to edit your footage in some application, of which there are many. A version might have come with your camera, you might have found one online or you may have purchased one in the store. To make things even easier, both Windows and Macintosh operating systems come with their own basic video editing software (Apple’s iMovie and Microsoft’s MovieMaker).

Keep Notes for Organizing Your Footage

On small shoots this will seem irrelevant, but it’s a very good habit to get into. This might be as simple as a sheet of paper that says “Monday, the Louvre, dinner with Sean and Cole, cruise on the Seine – Disk 3.” Later, when you’re looking for that footage of Grandpa sneezing on the Mona Lisa, you’ll know which disk it’s on. This is also excellent for when you archive your footage – storing boxes of DVDs with no accompanying text is a guaranteed headache down the road. 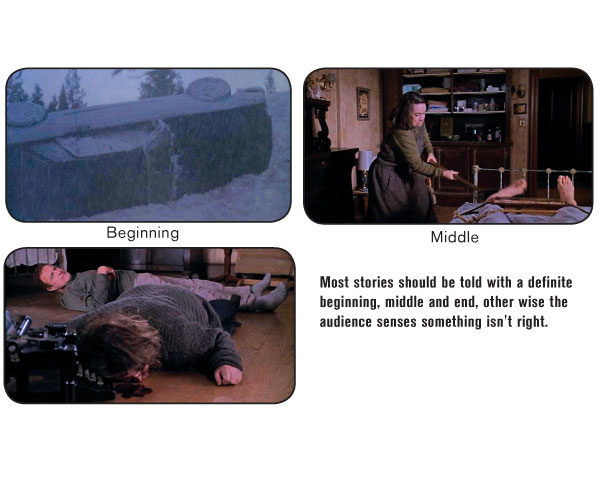 One of the reasons you’re editing is to tell a story or make a point. Leaving people with superfluous footage muddles your tale. Just like any story, your video should have a beginning, a middle and an end. This can be very simple: “We’re going to the zoo, we’re at the zoo, we sure had a great time at the zoo.” In fact, if you’re a famous Hollywood director, you still do the same thing: “Giant shark menaces New England town, men chase shark, men blow shark up.” Every once in a while, someone will throw a subtle curve, as Orson Wells did in Citizen Kane, which starts out with the hero’s death, then immediately leaps back in time to his boyhood. “Wealthy man dies uttering inexplicable last words, reporters search through his biography, audience learns a lesson about wealth, power, success and happiness.” But, for the most part, everything follows this formula. 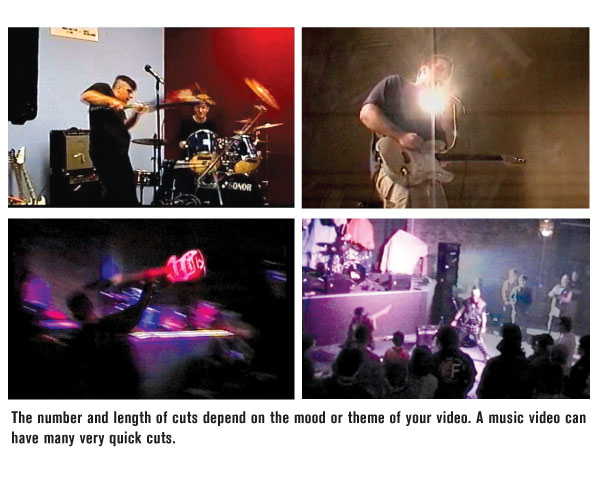 The Only Editing Techniques You’ll Ever Need

Today’s video editors come with many tools. They are a veritable cornucopia of filters that will slow your footage down or speed it up and transitions that will wipe from one shot to the next or look like a page is turning. They’ll let you add echo to your audio tracks or invert all the colors. But, just because you have these things doesn’t mean that you need to use them. You can have a long and fruitful career editing video using only a very small number of techniques. Of course, as your videos get more advanced, you’ll find uses for some esoteric footwork, but 90% of video editing revolves around just a handful of things.

Fades: This is probably the second most common transition. With fade in, the screen starts black and slowly your shot appears. With fade out, your shot slowly gets darker until everything is black. Fades are often used at the beginning and end of movies or to show that time has passed between scenes. Sometimes one shot fades directly into another instead of to black – this is called a cross fade or a cross dissolve.

Titles: Adding titles allows you to not only inform your audience about what they’re going to see (“Baby’s First Day at the Dentist!”), but what they’re seeing now in the form of subtitles (“Built in 1847”) and to let people know extra things at the end (“For more information, see our website…”). Careful use of titles can help speed your project along without long-winded introductions. Choose titles and fonts based upon the type of background they’ll be in front of – white text on a light background will have your audience squinting, Sometimes a black outline on the font or putting a solid color behind the titles helps a great deal.

Insert editing: This is a great technique which involves using one long master shot and splicing in a cutaway, keeping the master shot’s audio track. This is useful because you don’t have to match audio between two pieces of footage. A good example of when to use insert editing is a graduation video. Keep a master shot on the speaker and Junior getting his diploma, then during other parts of the ceremony pick up some audience reaction shots, the Goodyear Blimp flying over, etc. which you can insert edit (just the video) to cover times when you zoom the camera in or out or just to keep the scene from being static.

Audio dubbing: In Hollywood the sound recorded on location is very often not used in the final product because of difficulty in getting microphones in the proper places or background noise from the location. Lots of audio is actually recorded later and then over-dubbed – this is a process called Foley. Though you probably won’t be dubbing dialog, you will find opportunities to record voiceovers – narration tracks that you can put over the video – and sounds. Does your trip to the beach lack the barking of seagulls you were hoping for? Put them in later! You can’t have Bigfoot leap out of the forest without a terrifying roar, so dub it in.

It’s also very common to add music to video productions. In Hollywood, it’s always added later. All those scenes in loud clubs are actually filmed with no music, and the music is added after the footage is edited. This is so that you can cut from one shot to another without making the song playing in the background jump forwards or backwards. 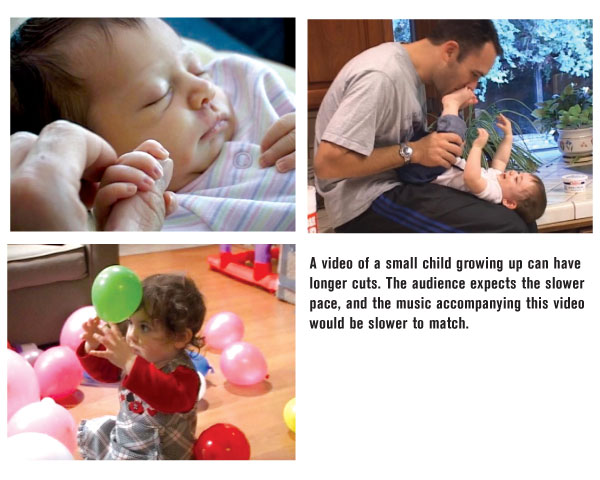 Too many cuts or too few cuts: The speed of your cuts determines the pace of your video. With its ponderously long shots, 2001: A Space Odyssey is very slow-paced, while music videos often have multiple cuts per second and are very fast-paced and frenetic. Find a happy medium that follows the pace of your movie.

Jump cuts: Jump cuts happen when you cut between shots without moving the camera. The people in the shot suddenly move, as though they’ve “jumped.” You can cover these up by insert editing cutaways.

Too many effects: Just because you have a star wipe in your transition folder is no reason to use it. Unless you’re making a late-night infomercial, be sparing in the use of transition filters and effects.

Learn From the Pros: One great thing about video making as a hobby is the easy access we have to the masters. Just turn on your television or pop in a DVD, and you can watch the work of the world’s greatest editors. Pay attention to editing techniques all the time – you can be learning while everybody else is merely watching TV.