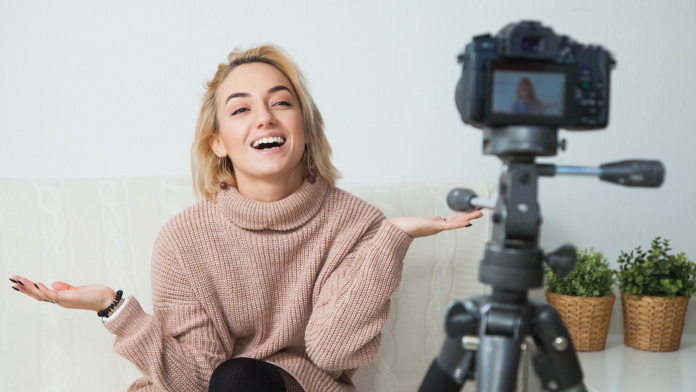 When it comes to vlogging or talk-show style video formats, this “dress for success” mentality translates into producing videos in anticipation of the audience numbers you want to have. When you start a new channel on your platform of choice, chances are you won't have many viewers initially. It’s disheartening, but building a large, stable audience doesn't happen overnight.

Too often, creators produce their videos for the audience they have, with the mentality of "hardly anyone's watching, so I'm not going to put much effort in it." This thought process prevents them from crafting professional-looking motion graphics to spruce up videos and enables them to be lax in their basic filming techniques — lighting, capturing good sound, etc. This type of complacency will turn away potential viewers and subscribers; preventing a channel from ever growing.

Videos need to look and feel as though they’re made for a large audience, regardless of what the actual statistics are. Not only will this improve the overall quality of your work, thus grabbing the attention of new viewers, but it also future-proofs your content.


Videos you created years ago might be what a viewer stumbles upon first.

The internet is a living history record for your work, wherein your older projects are just as easy to find on search engines as new ones. Videos you created years ago might be what a viewer stumbles upon first. They won’t know these were made when you only had a few people watching, so if it’s sloppy work, potential new viewers will go elsewhere.

Conveying this sense of importance in your videos boils down to a couple of factors: technical prowess and the personality of the video's primary host or hosts. Your show might be different from traditionally scripted projects, but that doesn’t mean the same video production basics don’t apply. Quality lighting with proper sound equipment is crucial and failing to adhere to basic production standards makes your video seem amateurish.

Pay attention to the backgrounds you’re using to make sure they fit in with the theme of your show and adjust the frame to look appealing. Even if you're sitting at a desk throughout the video, dress it up to look like it was specifically designed to be a part of your video. Whatever appears in the shot needs to be intentionally placed there and taken into account.

The basics of post-production should be followed to as well; making good use of cuts, inserts, transitions and filtering out bad takes. Even though your video may be little more than a talking head, use your color and image correction tools to ensure your image remains consistent between cuts.

Motion graphics and lower thirds go a long way towards making your videos stand out. They don't have to be intricate, but should use a clear, appealing design you can use multiple times. Utilizing the same motion graphic assets between episodes provides a consistency viewers can expect while eliminating the need to craft new graphics each time, although periodically updating is a good thing.

All this seems like a lot of effort for only a handful of viewers, but ensuring your videos are produced at a higher quality is a statement to everyone that you are professional and worth following.

If you have fancy graphics and high production values, don't ruin it with references to how small your audience might be. Whether it comes in the form of self-deprecating jokes like, "to the two of you watching out there," or begging for likes and subscribers, it will have a negative impact on your video goals. This is where having a clear persona for your host is important.

Act as though you’re speaking to a large audience, with all the enthusiasm and gusto that entails. Watch the hosts of your favorite afternoon game shows and you’ll get an idea of the personality you want to project. Utilize terms like, "to all our loyal viewers out there," "thanks for joining us again," and other phrases that give the sense you're talking to a large group of people.

It's similar to the "fake it till you make it" mentality, and audiences will mirror the energy being put out there. If the presentation comes off as low-key and designed for a smaller audience, that's exactly how people will react to it; they’ll feel no need to come back for more. Conversely, the bigger it seems, the more audiences want to be a part of it.

Regardless of the audience you have, produce the best work you can in every video. Don't let statistics dictate the level of effort you put into a project, because you'll never know when that video might become relevant. No one rises to meet low expectations, and if you don't set a high bar for your own videos, you'll never improve or grow an audience.