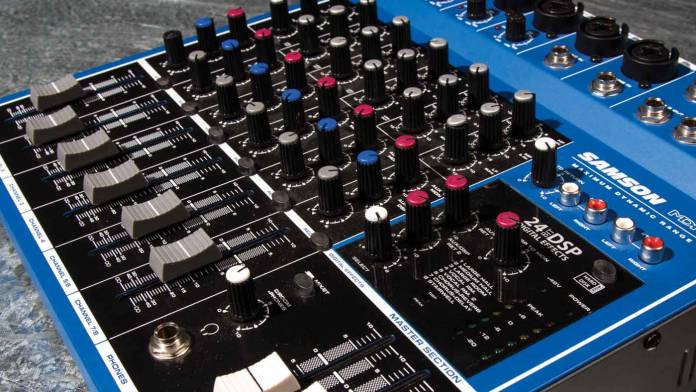 What do you do when you have more mics than inputs on your camera? It’s simple, get a mixer. A mixer will allow you to sum up all of your inputs into one stereo pair. Most mixers allow for XLR, ¼ inch mono, ¼ inch stereo (tip ring sleeve) and RCA inputs. XLRs are typically microphone inputs, ¼ are line level inputs or instruments and RCA can be for a whole host of inputs.

When you look at a mixer for the first time, it can be quite daunting. There are so many knobs and faders that make it seem very complicated. But once you realize that every channel in a mixer is typically the same as every other one on the board, it’s a lot easier to understand. So, whether you have a two-channel mixer or a 32-channel mixer, you only need to know how to operate one channel. A channel can either be mono or stereo.

Each channel is made up of five sections, starting with the beginning of the signal flow chain, the gain. The gain is a shield for the incoming signal that controls the amount of amplification (boosting the signal) or attenuation (reducing the signal) needed to raise or lower the signal to a “normal” level. Your level is normalized when you have a healthy sound signal coming in that still has enough headroom, so the loudest portions aren’t overmodulated. Overmodulation occurs when the incoming signal is too loud and your signal becomes distorted. Too much gain equals distortion. Next to the gain on most professional quality mixers are two buttons, one is a bass roll off – allowing you to roll off low frequencies being picked up on sources that shouldn’t have low frequencies. Using this feature prevents undesirable low frequencies from muddying up your mix. The second button is a pad. Pads come in many ranges,-10db, -20db, -30db and so on, but for the purpose of this article, we will say it’s -20db. Choosing to use the pad would reduce the input gain by 20 decibels. This will allow you to utilize the gain knob when the incoming signal is too hot (loud), even when the lowest amount of gain is being applied. This may be a particularly sensitive mic or a line level signal coming in too hot. 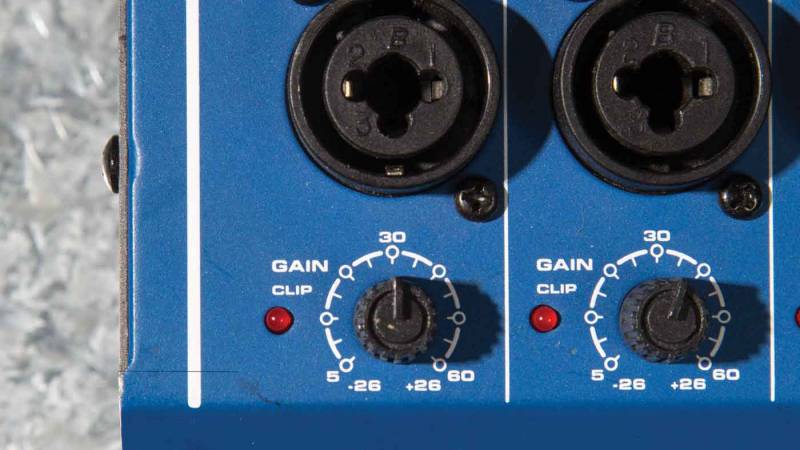 Once you realize that every channel in a mixer is typically the same as every other one on the board, it’s a lot easier to understand.

The next section of a channel strip is the equalizer, or EQ. The EQ allows you to add or subtract a given frequency. On a simple board, it’s broken up in to high, mid and low. Some mixing boards expand to high, high-mid, low-mid and low frequencies. Many beginners will make a common mistake when using this section of the board by boosting EQ frequencies to achieve a given sound. This is technically incorrect. The best practice is to use an EQ to remove troublesome frequencies, thus allowing you to have a clearer, and less muddy sound.  It’s getting the result you need by subtraction, rather than addition. 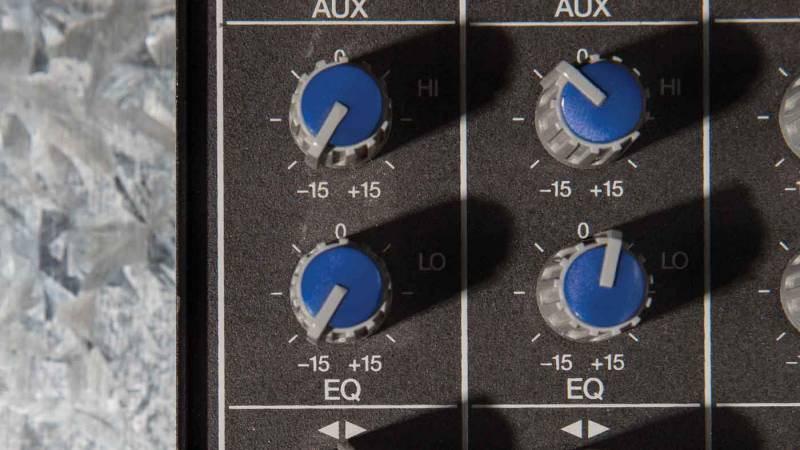 Moving down the channel strip is the Auxiliary or AUX. This is where you can send the input from the channel you are using to an outboard piece of gear, like an effects rack. You will be able to return the affected or wet signal to another channel, giving you control of the amount of effect you want on the returned sound. The effected sound is considered wet, whereas one without any effect would be called dry.

A simple, yet easily overlooked section is next, panning. Panning allows you to move the sound to the left or to the right or keep it in the center. This will allow you to play with the stereo image. The stereo image is the perceived spatial location of a given sound source. If you put an input at 30 degrees left it will sound like the sound source is coming from 9 o’clock in front of you. Playing with the panning of each channel will give you more space in your mix. A muddy mix sometimes can be fixed by placing different sound sources at different places in the stereo image. If you’re running three mics into a two-channel recorder, you can pan two of the mics all the way left, and one of them all the way to the right. This will at least give you some separation in post-production. Try to keep the most similar mics panned the same way. 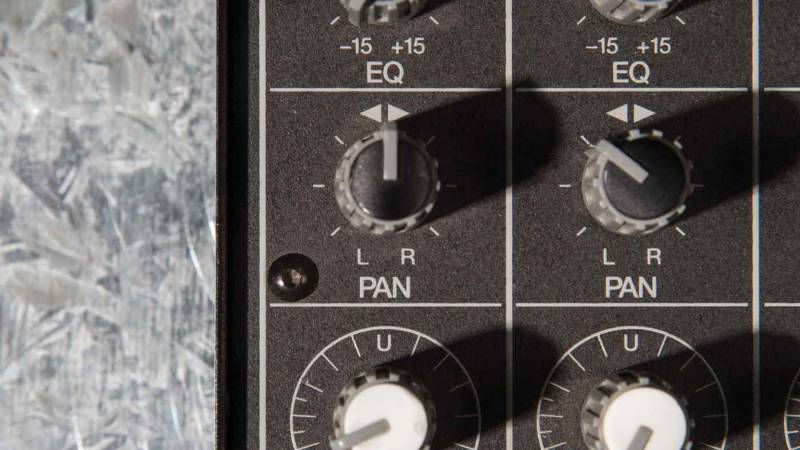 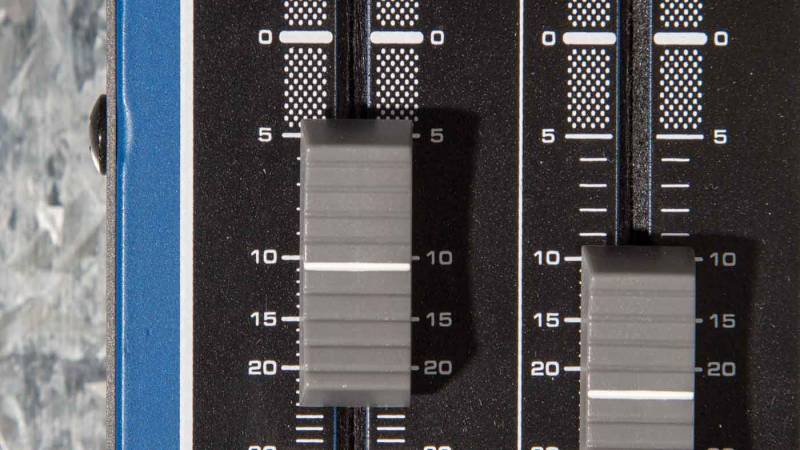 That is the main structure of each channel in a mixer. There are two other things you might commonly find on a channel strip.]The first is phantom power – to be used with condenser microphones that need power to function. This many times will be indicated with +48v. You must be careful though because some microphones like ribbon mics can be destroyed with phantom power. The second is a phase switch. A phase switch allows the phase to be changed so the signal that once pushed the cone is flipped to pull instead. This is very helpful when mixing drums. When you hit a drum, the top goes inward, and the bottom goes outward. If you put a microphone on each side, and mix the two sounds together, the two waves will counteract each other and sound thin or cancel each other out. This is known as out of phase. Choosing to  press the phase button on the mixer will flip the phase on the bottom microphone making the sound expand and become robust. 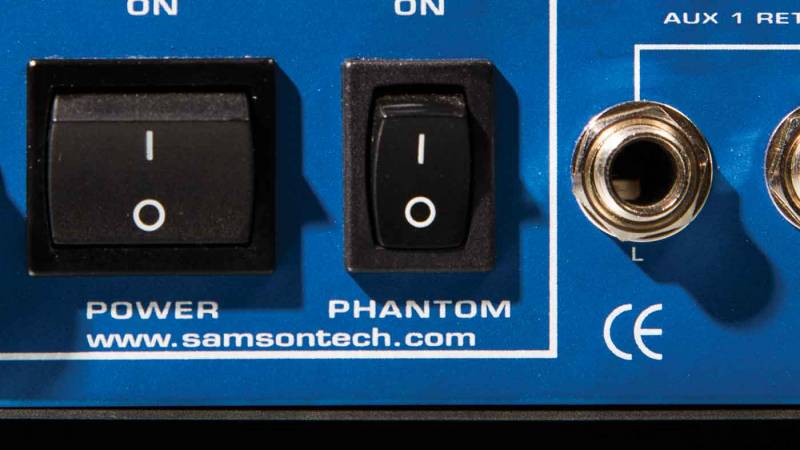 So now you have your first input sounding great, the gain level is not too hot to create distortion or overmodulation, you have the EQ setup for optimal clarity, you have panned the input to create the best stereo image and you have the level up where you want it.

You won’t hear anything if you don’t have the main fader or mix up. This controls the master volume level from all those input sources and sends it out of the mixer. This is where you control how hot the signal is going in to your recording device. You can choose to record the mix to a standalone audio recorder, or into your video camera.

Monitoring your mix is crucial. If you don’t have a way to properly monitor what you are doing, you’re throwing darts in the dark and hoping for the best. You’ll want to monitor off the main mix. This is how it will sound going to your recording device. Of course, it’s a good idea to check the signal from the recording device as well, so you can hear what is actually being recorded.

Understanding Signal Flow is key, and it all starts with your sound source.  Plug into a channel in the mixer. Adjust the input gain allowing for proper headroom, then notch out any undesirable frequencies. Repeat this process for each sound source, and use the faders to set the level of each channel in your final mix. Finally, adjust your main mix level. Remember that just like a single channel, your overall mix can be distorted if you crank up every input signal to the highest level. Everything is relative in your mix. If you turn down every channel fader 10 decibels, you’ll keep the same relative volumes while gaining the headroom you need. The right amount of headroom gives you plenty of dynamic range for whatever you’re recording to be quiet and loud and not distort or overmodulate. Once you’ve got the right mix with sufficient headroom, send the stereo signal out from the mixer. Some mixers offer XLR outputs and some have ¼ inch. Run those cables into your camera or recording device, and you should be good to go. Be sure to have the correct cable adapters to get the audio signal from the mixer to your device.

Don’t be intimidated by a mixer, it’s just the same thing repeated many times over and it’s an affordable option to get multiple audio sources into your existing recording device.  Understanding the basics of how it works can help you accomplish more complicated tasks and get bigger jobs. It’s a great tool that becomes easier to understand the more you use it.