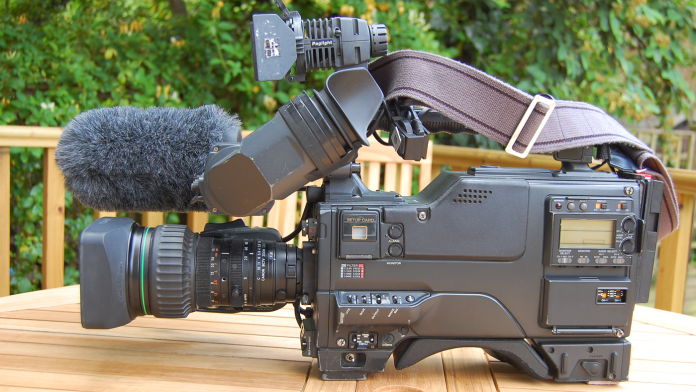 So let’s climb into that Tesla, buckle up, step on the accelerator and check out what it was like to produce a video “way back when.”  Walking in the shoes of a 1980s video producer is a very entrepreneurial notion and quite the leap of faith.  Not many people have that kind of belief in themselves. They will stick to mortgage banking, bartending or office work.

Walking in the shoes of a 1980s video producer is a very entrepreneurial notion and quite the leap of faith.

But you have the “bug.”  So you’re going to go for it. You decide that investing in some good equipment is an investment in yourself.  You take the steps to form a sole proprietorship, file a fictitious name at City Hall, and you are good to go.

In around 1986, you’d pay $25,000 for a Sony Betacam SP tape-cassette-based camera and that’s without the lens. Add $8,500 for the lens. You’d breathe a sigh of relief knowing that technology has moved beyond the clunky Umatic ¾-inch cameras and decks, and you’ll revel in the picture quality, Standard definition, with 340 – 480 lines of resolution.  Another cool innovation is that your camera can accept a 30-minute tape.

Forget about purchasing an editing system. The steep costs are prohibitive, into the tens of thousands of dollars. Your favorite post-production facility will create some time-coded VHS dubs for you from your footage. And then you’ll go home to your VCR and watch and pause and jot and watch and pause and jot. This will become your Offline EDL – Editing Decision List.  Why don’t you just take a stack of tapes to your favorite post-production person? Because as soon as you step into the facility and sit down on the client couch, the meter starts running, and at between $150 – $250 dollars an hour, it’s a big dent in your pocketbook. Wouldn’t you rather be prepared with a comprehensive list of time-code numbers – and desired transitions – and let your on-line editor work down your EDL list in an efficient manner?  And whenever they get up to go on a bio-break or smoke a cigarette in the alley, make sure the meter halts until they return to the editing bay.

And remember, it’s linear editing, not non-linear.  So if you notice an error 15 minutes into your show, or you decide to make a change at 30 minutes, you are going to either have to make a copy of the show, then edit from the copy, thus losing resolution, or you’re going to have to start again from the beginning.

But don’t worry.  After all the money spent, all the “blood, sweat and tears,” you have finally produced a show you are proud of. It has all the necessary elements: “star power,” valuable information and good camera work and editing. So you think the hard part is over, and the world will just embrace your show?  How do you get it out there so people will buy it? This is when the truly hard work begins, the marketing and distribution of your show via magazine ads and reviews, trade shows and foreign rights distributors and contracts, just to name a few.

Because it’s the 1980s, you are a pioneer. For instance, my partner, Mark Schulze, and I produced the world’s first “Extreme Sports Video,” an instructional tape in 1987 called “The Great Mountain Biking Video.”   Looking at it with today’s eyes, it has no special effects, crude graphics and the resolution is not as crisp as today’s HD and up.  But in those days content was king.  It now stands as a historical piece showcasing beloved pro riders at their peak, some of whom Mark followed wearing his helmet cam invention.  And it gives today’s viewers a great look at mountain-bike technology and terrains of the 80s.  In its day it was a resounding success.  It was widely reviewed and won a few awards.  Every mountain biker had to have it in their video library.  In the intervening decades, its title has been lifted to describe just about every mountain bike video that came in its wake.  Just google “Great Mountain Biking Video.”  And the use of sponsors’ products – bicycles, helmets, gloves, protein bars, etc. – has been copied by countless other producers in their videos over the decades.

When you arrived in the 1980s, the time and space continuum stripped you of all your devices.  You have no cell phone, no laptop, no computer.  To sell your video you are going to have to write letters or faxes to potential distributors.  But first, you need to collect some rave reviews by sending out VHS cassettes with a professionally-designed and printed box cover to local and national newspapers and periodicals.  Don’t forget to register an ISBN number! An International Standard Book Number identifies your video(s) for worldwide distribution. It costs approximately $2.50 to duplicate and package each tape. You’re duplicating  a minimum of 100.  Add shipping costs and a self-addressed stamped envelope so the publication can write back to you.  After collecting your reviews – aka “tear sheets” — which can take months, you can now go to trade shows to market your tape(s).

The best way to find distributors is to place ads in related publications. For a mountain-biking video for instance, you would place your ads in Mountain & City Biking, Mountain Bike Action and Bicycling Magazine. Better yet, offer to write articles about the video or riders in the video for a little extra press.

And you will also attend the VSDA – Video Software Dealer Association Show.  It is held mainly in Las Vegas and Los Angeles. It’s the place where all the Hollywood studios and mom-and-pop video shops convene to buy and sell videotapes. Remember, you have just invested money, time and creativity to your show(s) and this is the place to “make your nut.” You have to be diligent, your Billboard, Video Librarian and LA Times reviews clutched in your hand, meeting the right people who will propel your wares across the world.

Because it’s more advantageous to have a bunch of videos instead of just one, we produced several, creating a small catalog. Our videos appeared in many different venues including Publishers Clearing House, Sears, K-Mart and in schools and libraries.  And the price point on VHS tapes in 1988?  Anywhere from $20 to $40 bucks. And you’ll have to give 50 percent or more to your distributors.

It was a short window of opportunity, a video Gold Rush, lasting halfway into the 1990s. By that time, the price of camera and editing equipment was starting to drop, more video producers figured they could sell their videos, too, and the major studios began dabbling in special-interest videos.

Hopefully, by the time you screech to a halt back in the here-and-now, you will have gained a better understanding of the way things used to be in the Video Production World. I hope you can appreciate what the video pioneers who came before you were able to accomplish using yesterday’s technology.  The pace was much more easygoing back then, not so breakneck and fiercely competitive.  As technology continues to improve exponentially, what kind of revelations will you enjoy 30 years hence?