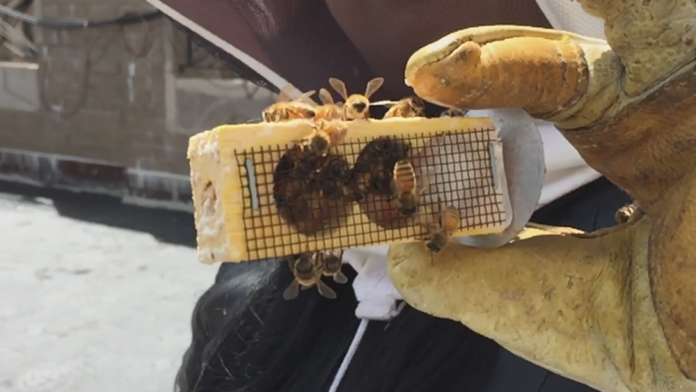 If you try to bang a nail into wood using the claw side of the hammer’s head, you won’t get good results. It’s also not ideal to hold the handle of the hammer towards the head, but rather towards the bottom. Knowing how to use your tool is more important than the model of tool you have.

Gear for the Real World

Not too long ago, I was teaching a week-long, A-Z, hands-on production workshop at Downtown Community Television in New York City. I sent a group out to shoot one morning and one of the students, Chris Manke, came back to class with some stunning slow motion footage of honey bees on New York City rooftops. I told him how impressed I was that he learned the intricate settings of the somewhat large and complicated Sony FS700 so quickly. Chris laughed and told me he shot everything using his iPhone.

I would love to shoot with the Canon C300 Mark II, but not only can I not afford that camera, I shoot all over the world and I travel with one suitcase and one camera/computer in my backpack. Space and budget are my main constraints. My gear is minimal.

A couple years back, I went on a public relations press trip to Aruba. Five filmmakers were invited to compete to make the most compelling travel video about the island. We had four days to write, shoot, edit and output. I brought two DSLR bodies, three lenses and enough audio and camera support gear to slip a baggage handler’s intervertebral disc – a ton of gear for one person to carry and coral. One of my competitors, Ryan Van Duzer, flew in with two GoPros and a small backpack of audio and supporting gear. To make a long four-day story short, Ryan won the competition despite the fact that I had more gear worth much more money.

Technically, these are the six most important components for telling a powerful visual story: focus, audio quality, lighting, composition, depth of field and color, roughly in that order. And most important, beyond the technical aspects, is an interesting subject matter and a compelling story. Let’s look at each technical aspect individually.

AND MOST IMPORTANT, BEYOND THE TECHNICAL ASPECTS, IS AN INTERESTING SUBJECT MATTER AND A COMPELLING STORY.

Focus: this should be the most obvious. As a general rule, you can’t have a good product with blurry images. You should have a camera that has manual focus to give you the most control. That said, cameras like the GoPro have very good auto focus capabilities that usually give me what I want Ã¢ÂÂ something to consider.

Audio Quality: Nothing will lose your audience quicker than poor audio. Light weight, digital recorders and lavalier mics are, for the most part, affordable and small. Pay as much attention to acquiring your audio as your do your visuals. Learn the basics of audio engineering and learn your audio recorder. The on-board camera microphone is not an option 9.9 times out of ten.

Lighting: I broke the bank here. I have a light-weight, easy to pack but by no definition affordable lighting solution. I dropped about a grand on a Westcott Flex Bi-Color LED Mat Cine Set (1-foot x 1-foot). I love it, but I’ve been lighting people and sets around the world for the last twenty-plus years using shop lights and Chinese lanterns holding 5600K photo lamps. Lighting can make or break a shot, so leave time and budget space to do it right. Learn how to use your zebra stripes and histogram to make sure you get proper exposure and master the art of diffusion and bounce.

Here’s my lighting setup before investing in the Westcott Flex:

Composition: Even if you just use the simple Rule of Thirds, you’re already out of the amateurs league. Study how your favorite media makers in television and cinema compose their shots. If you’re shooting narratives, interviews or just B-roll, study how the professionals do it. Watch a movie or show that you’ve already seen so you are not distracted by the plot, turn the sound down and study. I once recorded the intro to “Apocalypse Now” and made my own storyboards with screen grabs.

Depth of Field: This may be the trickiest of the lot. First, you must learn how to achieve shallow depth of field and then know when and why you should be using it. That’s a topic for another, longer article. And the tools you’ll need usually mean bigger camera bodies and expensive lenses. Two small cameras with full-frame sensors are the Sony RX1R and the Leica Q. Both have fixed lenses, which is limiting and both are pricy. If a DSLR is not too bulky, get one with a full-frame sensor and use it with fast lenses, meaning a low f-stop – f/2.8 or lower is best. If none of these solutions are available to you, back up and zoom in. I’ve seen some shallow depth of field achieved with GoPro type cameras using a macro filter.

Color: Color Correction, including grading and brightness/contrast adjustments, is accomplished in post-production. I’ve been grading directly in my editing program but with Blackmagic Design making DaVinci Resolve free, maybe I should reconsider. Either way, color correction and adjusting your brightness/contrast will bring your video to the next level.

Bringing It All Together

Combine these six technical tips with a good subject matter and a compelling story and you’ve got a hit with minimal gear. And remember: the best camera to use is the camera you have.

Morgan Paar is a multiple award-winning filmmaker and photographer who specializes in travel video, stills and articles. Paar has been location independent for over two years producing video, teaching filmmaking and consulting around the world. He can presently be found on Phu Quoc island, Vietnam. www.NomadicFrames.com