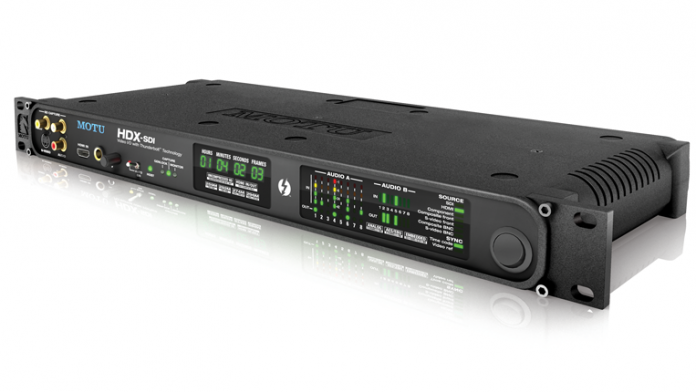 When you take into consideration what you'll need for the I/O device to work — the software you'll be working with as well as the computers and any other hardware — then you'll start to get an idea of which device is right for you. Of course, understanding the benefits and how an I/O device can help your workflow is paramount in assisting with your purchasing decisions.

Match Your Hardware with the Right Software

Many I/O devices are designed to support workflows with a limited group of software. Some only support the software that comes bundled with the hardware device. This is common in low-end video capture hardware that have software that only allows footage to be captured with a single codec and at low bitrates. While this can save you on storage space, it usually negatively affects your image quality, especially if you need to do heavy color correction to the footage.

Just like some kitchen gadgets, understanding all the features of an I/O device can be a challenge, but the most important features are the ones you'll need for your workflow.

Professional hardware devices are developed to allow you to work with multiple software packages like Adobe Premiere or Final Cut; they let you capture video with a variety of codecs and at higher bitrates or even uncompressed. This will allow you to apply effects and color correction to footage with greater ease. If you need a capture device for video streaming, having the right software support is a must since many video hosts only support a limited number of streaming software.

Any port in the storm? Well, not really!

For video I/O devices, you need to consider the ports on the monitors, tape decks, cameras and computers that you plan on using. The ports you have need to match the other hardware you're using. If your monitor has a displayport or DVI input and the video I/O device you want to use only has HDMI out, then you'll need an adapter which isn't very expensive; but, if you're looking at a PCIE card that only has SDI ports, then an additional converter device will be needed, which can be costly.

Does your device need to roam?

If you'll need an I/O device to work with a laptop or multiple computers, then one that connects via USB 3 or Thunderbolt may be best. If you need a device for a single desktop computer and want to keep your ports free for other hardware, like storage, then a PCIE card might be a better option.

The most basic and usually the least expensive I/O devices work only as an in or an out. If all you need to do is attach an external monitor to your editing rig, then a device that will work with your software and give you an HD or 4K out so you can monitor your cut in full resolution may be just the thing for you. You may need a device to capture video from a camera or switcher to live video stream. In that case, a simple capture card or external device may be a great option, but if you want the ability to have a monitor out, then you'll need a bigger device.

It dices! It slices! It makes julienne fries!

Kitchen gadgets are often advertised to do a dizzying number of jobs. I'm still not sure I even know what “julienne fries” are. Just like some kitchen gadgets, understanding all the features of an I/O device can be a challenge, but the most important features are the ones you'll need for your workflow.

You may be looking at an I/O device that has the ability to do live chroma keying. Most of us wouldn't have a use for a feature like that, so we wouldn't need to know exactly how it worked, although if you need a solution for live video streaming this could be handy. You don't really need to understand all of what a device can do in order to get your projects done. There are a number of I/O devices that offer multiple ins and outs in different port types. These devices support multiple software packages and come in a range of prices.

Here are a few of the I/O devices available now.

This PCI Express card is an inexpensive solution for video capture and streaming. The card has SDI and HDMI inputs and supports HD and SD capture in a wide variety of codecs. The DeckLink Mini Recorder supports a wide array of software from audio and video editors to effects to video streaming.

The Thunderbolt connected monitor interface is small enough for nearly any work space. It supports SD and HD in the Rec. 601 or Rec. 709 color spaces. Real time effects are supported in Final Cut, Premiere and Media Composer. The UltraStudio Mini Monitor supports a broad range of software for Windows and Mac.

HDMI, component, S-Video and composite ins and outs are available with this PCIe X4 card. The card offers the flexibility of working in SD, HD and UHD (4K TV), which can be a great help to those working with older footage but wanting a solution that will be useful in the future. The Intensity Pro 4K supports various software in Mac, Windows and Linux.

The T-Tap is a pocket size Thunderbolt connected monitor interface for SD, HD and 2K (2048 X 1080). The devices has HDMI and SDI outputs and works with Mac and Windows. The T-Tap offers 3D output support via HDMI and up to 10-bit video depth making it an affordable option for 3D monitoring.

The Motu HDX-SDI has many of the features seen in many PCIe capture cards including SDI, HDMI and analog inputs, an RS-232 control port and software support for Premiere, Final Cut and Media Composer. This card stands out because it can handle 16 channels of analog audio via balanced ¼ inch TRS jacks and 16 channels of digital audio via AES/ECU. All the ports are housed in a rack mountable breakout box. It can handle SD and HD video up to 1080 30p as well as 5.1 and 7.1 surround sound. The HDX-SDI is gives you the audio functionality of a high-end digital audio interface along with the features of a powerful video I/O devices. If you're looking for a solution with a large amount of video and audio flexibility, then the HDX-SDI maybe for you.

The VS4 is a capture PCIe card designed for multi-camera video streaming and recording. It has four SDI ins each of which can take a camera feed in SD or HD. Using VS4 with Wirecast you can switch between four cameras and stream the output at any resolution up to 1080p. VS4 adds ISO recording of the original camera feeds at SD, 720p, 1080i or 1080p. With Matrox VS4Recorder Pro software, you can view and frame accurately record four SD/HD inputs at once for easy clip synchronization in any NLE. In Adobe CC, VS4 offers metadata support and real-time multi-camera editing. While it's not for everyone, the VS4's unique features are very handy for some workflows.

The Io 4K connects via Thunderbolt to a PC or Mac and has quad-link SDI for full 4:4:4 color in SD, HD, 2K, UHD and 4K input or output with frame rates up to 60 fps. HDMI in and out of the devices can handle SD, HD, 2K and UHD. The Io 4K is compatible with selection of software for production, post and streaming. It even offers reference video in and out to ensure footage captured retains proper timecode.

The options and features available for I/O devices may be far from simple, but finding the right one for you shouldn't be overly complex. By looking at your workflows as well as the hardware and software you use, you'll find the gear that's right for you.

Sidebar: The Top 3 Reasons You Should Use an External Audio Interface

An external audio interface can be as simple as a USB or Lightning microphone that has a built in analog to digital converter or as complex as a large multi-channel DAW. They simply connect to your computer digitally and allow you to connect an analog audio input and/or output to them or have a built-in analog device like a USB mic. Here's why you need one:

Desktop computers, laptops and mobile devices are all crammed full of electronic circuitry that creates radio frequency noise. That noise to some degree or another is picked up by the audio hardware inside the device. It's common for noise created by a device to come through the audio outputs and be audible through speakers or headphones. With some computers you can move the mouse and hear the noise coming from the system. This can make audio clean up very difficult if you're trying to eliminate noise that isn't in your audio file but can be heard with your speakers. That circuitry noise can be picked up when recording as well. By using an external audio interface that connects digitally to your computer or mobile device, you can eliminate most or all of the RF noise from affecting your audio.

Audio ports on most computers and mobile devices are, typically, not very high quality. 1/8 inch (mini) jacks aren't used in professional audio gear because their size makes them prone to connection problems, noise and rapid wear, but often, they are all that a device has. Many external interfaces offer higher quality jacks like RCA, ¼ inch or XLR. Even if the audio external interface you use only has 1/8 inch jacks, they are usually higher quality than your devices.

External audio interfaces often have analog controls for input and output gain so you can adjust the volume of an attached microphone as well as the volume to your speakers. This gives you easier control over your audio and can give you higher quality recordings since you can control the gain of a mic before the signal is digitized. With larger interfaces like digital mixers and Digital Audio Workspaces (DAW), you can control multiple audio inputs and outputs.