Advertisement
Home How To Lighting 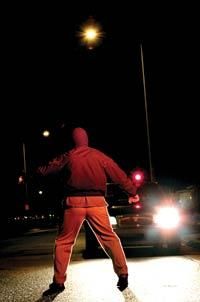 Some may think that shooting in low light or after dark is not possible, but in many cases, the lack of light may allow you to create an artsy, vignetted scene bathed in pools of light. Following are six tips, and a couple cautions, for shooting video after the sun goes down.

Tip 1: Use a Wide-angle Lens Setting

You can get better shots in low light by using the short end of your lens. Depth of field (that is, the amount (or depth) of your shot that is in focus) and actual lens crispness is greater with wide angle focal lengths; as you zoom in, especially in low light, it may be very difficult to focus on your subject at all. It’s much better to stay wide and move your camera closer. You may save yourself 2 or 3 f-stops of gain enhancement and have a clearer, less-grainy shot.

Tip 2: Avoid Zooming
You will do well to not zoom for the same reason: As you increase the focal length (by zooming in), you greatly reduce the amount of light actually making it into the camera. Rather than zooming with the lens, maintain the wide focal setting and dolly the camera closer to your subject.

Auto-focusing lenses are easily confused in dark shots, so disable the auto-focus feature of your camera and focus manually. You can usually zoom in, find your focus on the subject, then zoom out to your desired framing (in this case, the widest angle focal length possible) to begin your shot.

Lighting an entire night scene may be difficult, but it really isn’t necessary. You can pool light in small areas to great effect, without having to light the entire scene. This highly dramatic technique can provide specific areas for your subjects to move in and out of and can be arranged within a larger shot to provide strategic areas for action or the delivery of lines. When creating pools of light, be aware of the contrast between light and dark areas, and use this additional contrast to enhance your shot. Be careful not to overwhelm whatever ambient light is in the shot, but try to match the level of your light pool with the general level of other lighted areas. This way, you can set your levels for the subject and still maintain a visible background.

A pronounced key light, perhaps with no fill or back light, will give you a highly dramatic shot, but it may create too much contrast. Adding diffusion to your light will spread the pool somewhat, but the contrast will be reduced and your chances for matching ambient light levels will be much better. You may also want to bounce your light off a reflector.

In some instances, you may want to lose the background altogether, setting your shot a little wider than the pool of light so that the edges blend into a black background.

Gels are a wonderful way to give your light a particular character which may be more in tune with the surroundings or feelings your are trying to create. Whether you seek to simulate the icy blue pool of a streetlight, a warm, orange glow from a window, or even a white blast from a car’s headlights, you can mix gels with diffusion to achieve a wide array of effects.

When shooting in low light, the quality of your picture may be less than what you may ideally want, but remember that the heightened drama of the shot may outweigh the quality loss. Also, the event or subject may be so powerful itself, that with the audio, the actual video quality may not matter that much.

Caution 1: The Good & Bad of the On-Camera Light

You may feel that the light mounted atop your camcorder is all you’ll need to shoot in the dark. In most cases these instruments operate on the same battery as your camera and are intended for close use only; they generally do not have enough punch to reach out into a night shot and do anything noticeable beyond a few feet. They are very useful however when used in conjunction with other lights, or if the subject of your shot is an interview.

Your camcorder light will quite adequately illuminate a subject in a news-type interview, where the person on camera is near the camera and there is no intended drama. As this type of light may be fairly harsh, be prepared to place a small piece of diffusion material in front of the light.

Remember that the camcorder light is indeed attached to the camera and will move as the camera moves. This makes it less useful for produced shots. Also remember that camcorder mounted lights use much more of your battery than the camera by itself.

Be aware that your lens is susceptible to refractions at night, when errant light bounces around inside the lens and creates all kinds of, at times, less than desirable effects. You can usually minimize these out-of-control refractions by either moving your placed lighting instruments (the back light is often the worst offender), or mounting a flag above your camera to shade the lens.

Caution 3: The Pain of Gain

If you have a high-end camcorder, it may have an electronic gain boost which effectively gives you two, three or more additional f-stops of light, but there is a cost involved: Grain. As the gain is increased (where increments of 3 decibels equal one f-stop), so does the grain. This effect can become significant at levels above 9db, but sometimes it means the difference between having an image or not. This graininess can be introduced to actually enhance the feeling of some shots, but use it sparingly as the effect is generally very soft, at times looking out of focus.

At the end of the day (and after all, that is when most nighttime shots are taken), you will know that setting a shot in low-light can be quite rewarding. Of course, when you see the shot of a candle dancing to the chorus of a poem recited by the poet there, not-quite-visible in the dark, you’ll know that sometimes, it’s what you don’t see that really makes for a powerful shot.

Remember that shooting in low-light makes it difficult for cast and crew to navigate the set. Bring plenty of flashlights, thoroughly dress your cables under mats or tape, and be aware of your perimeter so that curious or unwanted "guests" to the set are noticed before they simply appear out of the surrounding darkness.