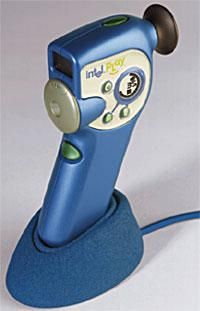 The Canon ZR20 is one of three new ZR line Mini DV camcorders. Canon says the new models will have features and accessories found only in more expensive digital camcorders.

"Canon’s ability to pack a lot of features in a small box and offer it at a low price places consumers in the thick of the digital video age with sophisticated technology that is easy to use," said Yukiaki Hashimoto, vice president and general manager of Canon U.S.A. Photographic Products Group.

The ZR20 will feature a video shooting mode and a digital photo mode. In the photo mode, the ZR20 will capture 700 still video pictures on a single Mini DV tape. Video and still photos can be combined. Each still photo and its accompanying sounds are recorded for approximately six seconds.

Other features will include an image stabilizer that functions in both video and photo shooting modes, a 10X optical and 200X digital zoom and a 2.5-inch color viewfinder.

The ZR20 will sport a host of other features including an external mike jack, built-in speaker and selectable AV/headphone jack.

Scheduled for release in May, the ZR20 will retail for $799.


This Duck’s No Quack

Automatic Duck, Inc. announced the release of OMF Composition Import, a plug-in for Adobe After Effects 5.0 that streamlines the process of importing projects into After Effects from Avid editing systems.

"We created OMF Composition Import to make the work of today’s editors faster and easier," said Automatic Duck, Inc. president and software co-creator Wes Plate, "to allow them to focus on their ideas and not on the process. It will change the way people work.

In one step, OMF Composition Import transfers an entire Avid timeline into After Effects 5.0 and imports all the media necessary to recreate a project.

OMF Composition Import is scheduled for release in the second quarter of 2001. It will have a suggested retail price of $495 and be available for purchase through the Automatic Duck Web site at www.automaticduck.com.

The Debut of Boris RED2

BorisFX will debut the latest version of its compositing, graphics and titling plug-in, Boris RED2, at NAB 2001 this April.

With a suggested retail price of $1,995, Boris RED2 will offer enhanced 3D compositing, advanced text creation and animation, as well as customized creation, animation and extrusion of vector shapes.

Mattel, Inc. and Intel Play will launch a new line of smart toys for children this fall.

The Intel Play Digital Movie Creator and Editing CD-ROM will let children videotape and edit their own movies on a computer equipped with a USB port, sound card and Windows 98.

The digital movie camera will capture live video and still images for download to a computer, where kids can combine them with sound files, video filters and text.

The Intel Play Digital Movie Creator is expected to sell for less than $100. In addition to the camera, it includes a microphone and tripod stand.

The PV-DV951 will be equipped with the same type of 3-CCD system used in Panasonic’s professional broadcasting equipment.

The camera will feature the built-in Panasonic PhotoShot digital still camera function and allow users to transfer captured stills to a PC via IEEE 1394, PHOTOVU LINK and CARD LINK. The CARD LINK Memory Card slot will accommodate either a MultiMedia Card or the new SD (Secure Digital) card.

The PV-DV951 will offer a new optical image stabilization system that uses two moveable lenses and two fixed lenses. Two gyro sensors will operate at 480 times per second to detect any shaking, and two linear motors will shift to compensate.

Other features include a multi-image playback function that lets you view nine consecutive still images on the LCD screen in playback mode, a manual focus ring, analog video in, headphone jack and external microphone jack.