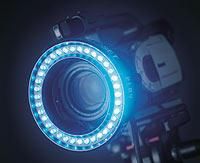 Traditionally, when you want to create a chromakey effect it’s a much-involved and tricky affair. You’ll need a backdrop or wall that’s painted one solid color, usually blue or green, and you’ll have to light it evenly to achieve a uniform key color. At least, you used to. That’s all changed now that Play has introduced its innovative chromakeying solution called HoloSet.

The HoloSet system includes an ultra-reflective backdrop material and a cool HoloRing optical emitter that fits around your camcorder’s lens to cast a broadcast-quality key source without chroma spill. The system is designed for advanced videographers who put a premium on chromakey effects and who are willing to pay for them. The system isn’t cheap, but when you consider that you don’t need an expensive lighting setup for the backdrop, and factor in the time you’ll save, you may find that the system pays for itself.

The HoloSet system is customizable and portable. It consists of a HoloRing, which fits on your camcorder’s lens and emits a ring of blue or green lights. The other elements of the system include reflective background material and a controller/power supply that controls the intensity of the light that the ring emits. The system we received from Play was custom made. It consisted of a blue HoloRing (optical emitter), a controller, power supply and 13-by-13.5-foot reflective material. This system costs about $4,800, but Play offers a Starter’s Kit that costs about $1,575. It’s the same system that we reviewed but the reflective material is much smaller, measuring 2-by-1.4-meters (6.56-by-4.59-feet). This is an affordable system that can get you up and running quickly. Since the reflective material can be cut to order, you can save considerably by cutting down on the amount of material you need.

But weather reporting is not the only reason to chromakey. Any time you want to create a virtual set, whether it’s a make-believe world for a space scene or an informative graphic behind a commentator, chromakey is what you need.

Normally, when you create a chromakey effect, in addition to lighting your talent adequately, you need to light the backdrop evenly so there’s no chroma spill when you blend the images together. This usually requires another set of expensive lights. This is where the HoloSet really shines (pun intended). The reflective material is expensive because it is extremely sensitive and reflective. Tiny glass beads make it similar to the reflective material found on highway lane dividers.

We positioned our talent in front of the reflective backdrop and set up three-point lighting to illuminate her for the camera. With the HoloRing lit, we pressed record. When we initially tried the HoloSet, we lit the ring and stood there waiting for something to happen. Nothing did. To our surprise, when we looked in the viewfinder we saw the blue backdrop. When we looked up, it wasn’t there. The HoloRing essentially creates the blue (or green) light that the lens can see, but the naked eye cannot. Pretty cool stuff. By adjusting the controller, we could increase or decrease the emitter’s intensity.

We recorded a couple minutes of footage, messing with the HoloRings intensity just to make sure we got what we wanted. Then we were then ready to open Adobe Premiere 5.1 to create a key.

We connected our GL1 to our test computer and captured the footage we had recorded. If you use another program besides Premiere, the steps may vary, but the basic process should be the same. We imported the video file into Premiere and dragged it to the Video 1 track in our timeline. We then imported a .jpg image that we had previously captured and placed it on our Video 2 track. We selected the video clip and chose Clip, then Video from the Menu. We selected Transparency from the drop-down menu. We chose Chroma in the Key type and used the eyedropper to select the color of the background. We then made a few adjustments, and when we liked what we saw, we pressed OK. We rendered the clip and waited for the computer to process.

When the rendering finished, we checked out our chromakey effect and we were impressed. It looked great and blended perfectly with our background image. There were no jagged edges and no colored halo around our talent’s head. The entire process was as easy as pie and the results were out of this world.

While we weren’t thrilled with the cost of the HoloSet’s reflective backdrop, we were truly impressed with how simple the system was and how well it worked. If you’re into creating virtual sets and other chromakey effects, the Starter’s System could be well worth its cost. If you’re a professional and use chromakey extensively, a larger, customized set, even with its higher price tag, could be a worthwhile investment.