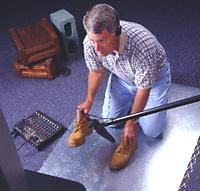 A heavy-booted Darth Maul strides the steel-plate decking of the Coruscant Docking Bay. When this scene was shot the set floor was vinyl and the actor made almost no sound at all when he walked on it. Your job, as a Foley sound effects technician, is to add those footsteps –and give ’em an evil iron clang in the process.

Foley audio is the live recording of sound effects –effects that you create, capture and add to video programs in post production. Foley audio is such a useful technique that you may want to make it a part of your regular editing tool kit. Consider:

Above all creating them is so much fun that you might end up having friends in for a Foley party. (Note to teachers: students of all ages delight in Foley recording and are usually quite good at it.)

So let’s see how to set up and operate a simple Foley recording studio.

Recording Darth Maul’s menacing footsteps is not hard, as we’ll soon see. What’s tougher is to place each footfall on the audio track exactly where heel and toe touch down on screen, for each of 23 separate steps.

In digital nonlinear editing, you can mark a visual step, then drop a single step sound on an audio track and push it back and forth until it syncs with the picture. That’s how you lay any wild audio effect.

Ah, but to supply the remaining steps you now have to repeat the whole routine 22 more times; and if Darth is accompanied by a battle droid, you then have to move to a different audio track and re-repeat 23 more with the droid’s different-sounding boots.

That’s 46 hand-synced effects for a single ten-second scene. (In traditional linear video editing, of course, the job would be dauntingly difficult with time code and flatly impossible without it.) If your temperament can stand this numbing, finicky process, you’ll find better paid work in 3-D computer graphics. If not, repair to your Foley studio instead, where you can lay both sets of footfalls in only a few minutes.

Get an iron construction plate if you can (or upend two 55 gallon drums) for your Foley artists, (as they’re called in the Industry) and place them on the walking surface where they can see a monitor that’s displaying Darth and the droid. Play the clip repeatedly while they practice syncing their footsteps to those on the screen; and when you have a match, record the effect as an audio dub. Since the on-screen actors are walking away from the camera, you can easily reproduce this perspective by moving (or turning) your microphone away during the recording.

This example contains the gist of modern Foley sound recording:

Setting Up a Foley Studio

The movie industry has special sound stages devoted to Foley recording; but you can set up shop anywhere it’s quiet.

The whole idea is to record effects with little or no ambient background sound. So work on carpet under an acoustical drop ceiling, if possible, with lots of draperies and other sound absorbing materials. For Foley work in the field, buy or rent furniture pads from your local moving rental franchise to help absorb ambient sound.

For equipment, you must have at least a VCR and monitor to play back the video, and a mike to record the effects. A camcorder mike works fine if you can snuggle up to the sound source, but an external, directional, shotgun-style mike is probably better. Use a mike cable 12 to 15 feet in length: long enough to permit flexible positioning and movement but short enough to minimize audio interference.

In addition to this simple setup, three other items are highly desirable:

If you are editing digitally, your software probably has variable reverberation available as an audio effect.

With the equipment in place, you need suitable noisemakers to record (see How’d they do that? Sidebar). Professional Foley studios have collections of stock props such as doors, bells, appliances and so-forth. Studio floors are laid with squares of concrete, hardwood, dirt, leaves and bark, etc. so that Foley artists can "walk" for the microphone on a variety of surfaces. (For better control, they often wear shoes on their hands –especially when male artists are faking females clacking along in spike heels.)

We’ve mentioned that the key recording technique is proper miking: get the mike close to optimize the signal quality and screen out background noises. Also, a close mike minimizes reverb, which you’ll add, to taste, later.

Incidentally, if you can’t add echo, try to record the effect in a comparable environment. Want that aircraft hanger? Point the mike into that empty 55-gallon drum you got for Darth Maul’s footsteps.

Another key technique is layering. If you need more effects than you can lay in at one time, make a dupe of your master footage and then Foley-record the first group of effects onto it. Now, put that dupe in your source deck, sync it with the master footage in the record deck, and mix the dupe tape audio with the second set of effects as you lay them down.

Of course, if you’re doing digital post production, you can layer as many sounds as you like by laying them on separate tracks. If you’re a SoundBlaster master, you may be able to record your effects directly to disk as .WAV files. For the rest of us, it’ll still be easier to lay the effects on tape and then digitize the results.

Finally, here’s a faux-Foley technique that can be very funny, if used judiciously (as with any joke, a little bit goes a long way). Instead of making actual sound effects, use your voice to post-sync vocal imitations. It’s even more fun when several people are assigned specific tasks (he’s the door; she’s the footsteps). I’ve even had students who used comic strip-style words instead, actually saying, "click, creeeeeeeaaak, click, walk, walk, walk, walk…." etc.

But too much of that funny business leads from Foley to folly.