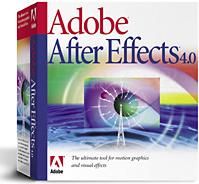 After Effects Goes to Version 4.0

Adobe released two flavors of the newest version of After Effects, After Effects 4.0. Available in a Standard Version and a Production Bundle, this version of After Effects promises to be the most efficient to use yet by sporting a new RAM preview. The difference between the two is that the Production Bundle includes warping, motion control and keying features that the standard version lacks, as well as a new feature called Particle Playground that does falling leaves, swarming bees, exploding text and other cool effects.


If you like using a boom to hold your microphone, but have trouble finding a person to hold your boom, the Equipment Emporium EQE Boompole Holder is for you. The Boompole Holder works with a standard grip head, or can be screwed into a C-clamp to hang virtually anywhere you want it.


For videographers looking to add computer-generated images into their video productions, there is the new HyperConverter Gold PCI scan converter from PC Video Conversion.


ADS Technologies recently introduced the Pyro Digital Video Card (formerly known as Momentum). This $199 PCI card has three FireWire (i.LINK or IEEE 1394) ports to connect digital camcorders to your Windows 98 computer. It comes bundled with Ulead VideoStudio, and a cable.


Bogen’s Manfrotto brand has a new Low-angle Stabilizer, model number 3427. This, when combined with the Manfrotto 3138 Tripod Floor Spreader, provides rock-solid support for ground level shots, according to Bogen.


The miroVIDEO DV200 is a new FireWire card introduced by Pinnacle Systems. It has two internal and one external FireWire (IEEE 1394) ports, and comes bundled with Adobe Premiere LE and Pinnacle Systems DVTools software.


Looking for production music? Valentino Production Music and Sound Effect Libraries introduced the new Evergreen Production Music Library. This collection consists of 113 CDs of themes, cues, bridges, titles, openings, closings, stings, moods and backgrounds in over 43 categories. It is also limited to the first 250 videographers who license the music, so it won’t be in everyone else’s productions.