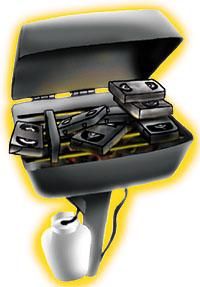 
I enjoyed your piece on "The Videomaker Panel: Linear Editing"
(December 1997). As the creative director for an advertising agency, I generally
edit in a nonlinear environment when I am producing a visually intense commercial
and want to sample a variety of editorial possibilities. It’s work in progress.
I also believe that a nonlinear edit has the potential to make the end product
much stronger. And when that product is played over and over, particularly
on TV, editorial decisions are critical. Whether you work in the linear
or nonlinear domain, it’s still boils down to your message. And it had better
be good.


I’d like to know what the difference is between so-called "professional"
nonlinear editing systems, like Media 100 or Avid Media Composer, and "prosumer"
systems like DPS Perception, DraCo Casablanca and Fast AV Master. Aside
from the huge difference in price, function and quality, they seem to be
the same. Systems at both the professional and prosumer price point compress
video to make use of available hard drive space; both can be potentially
configured with FireWire input; both include effects and titling software.

You said it yourself, Mike: the key to the greater expense of systems like
the Avid or the Media 100 is output quality. This is why they’re commonly
used in broadcast applications, where top-notch video quality is a must.
Functionally, they’re very similar, which is a good thing for those of us
who want the convenience and power of nonlinear editing at a more reasonable
price.


I cannot come up with an explanation for the lack of Y/C and composite
analog video and audio inputs on DV camcorders. Back in the late ’80s when
Hi8 and S-VHS consumer camcorders arrived, both had these inputs, despite
being formats you could use for dubbing rental tapes. There are a million
reasons why users would like to have analog inputs. For example, I’ve worked
with physicians who do endoscopic and laparoscopic procedures and they are
currently using Hi8 camcorders to get the best footage. Other equipment
like scanning electron microscopes and surveillance CCTV could also take
advantage of the practical nature of the DV format.


In the September 1997 "Benchmarks" column, Joe McCleskey reviewed
an AKG shotgun microphone. I have had a great deal of difficulty trying
to find a source who would sell me this product.


On page 87 of the December 1997 issue, we refer readers to "Clean
Up Your Video Act" in the August issue of Videomaker. The article
actually appears in the August 1996 issue.