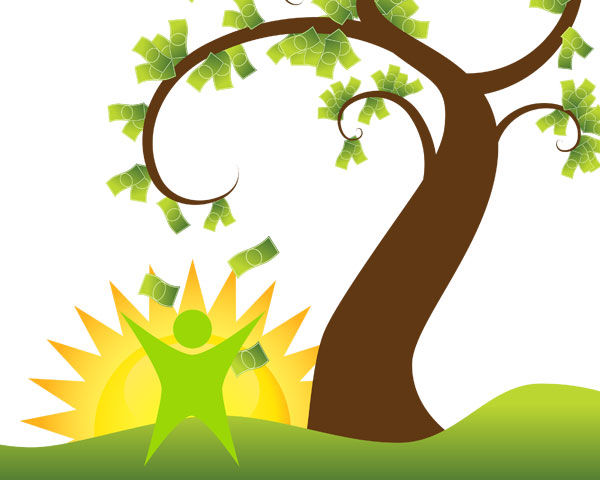 So you’ve decided to shoot a documentary. You’ve found a topic you’re passionate about, possibly one with broad interest, even great social relevance. You’ve secured access to the key players and locations, and you’ve completed your research. You’re now ready to start shooting, or perhaps, you’ve already begun. Only one thing is lacking – money. You need it, you don’t have it, how are you going to get it? Welcome to the world of funding documentary films, probably one of the least glamorous aspects of documentary filmmaking, yet one of the most critical.

Before launching into any fundraising campaign you should first determine who your audience will be. What is the demographic to whom your topic will appeal? Is your documentary likely to endear due to its heart-warming nature or enrage because of some injustice it reveals? Who are the people that it will move and who may be the most likely to support it? Once you have accurately determined your audience, you will be able to more effectively narrow your search for funds. 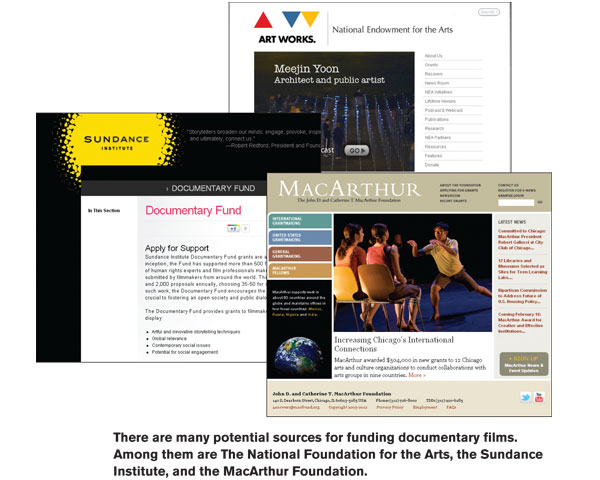 Two of the most time-honored sources of funding for films, and two of the toughest nuts to crack, are government grants and private foundations. With strict and plentiful requirements and loads of competition for the available monies, these can be time consuming and very difficult to obtain. That isn’t to say you shouldn’t try however; just do your due diligence and know what to expect beforehand. Some grants can be quite large and if you’re fortunate enough to land one of these you may find your project substantially, if not entirely, funded.

Another option may be to look at your state’s and even local county’s humanities and arts councils to see what funding opportunities may exist. These grants will be much smaller than the nationals and so will the number of competitors for them. These may be easier to obtain and will create for you a track record of fundraising success.

Foundations such as the MacArthur Foundation, the Ford Foundation, the Sundance Institute Documentary Fund, the Pacific Pioneer Fund and the Paul Robeson Fund for Independent Media can also be major sources of documentary funding. Do some research beforehand and you will save yourself loads of time and frustration when applying for foundation funds. Foundations are very particular about where their money goes and what messages are being supported with it. If your documentary is about the benefits of deforestation and paving the way for industrial ingress into the remaining wilderness areas of the world, then applying to a foundation who supports the preservation of rain forests and wildlife habitats will probably be a waste of your time.

Don’t just apply to a foundation for funds without first doing some research and learning a few things about them. What have they funded previously? Anything similar to yours? What is their mission and in what ways will your documentary support it? Is it a topic they are likely to be interested in, even excited about? If so, your chances of success will improve. Does your documentary run contrary to their mission in some way? Is it simply neutral, with no relevance whatsoever to the mission of the foundation and therefore likely to be of little interest? If so, then move on. There are plenty to choose from; spend your time where it is most likely to bring you positive results.

A Word About Experience 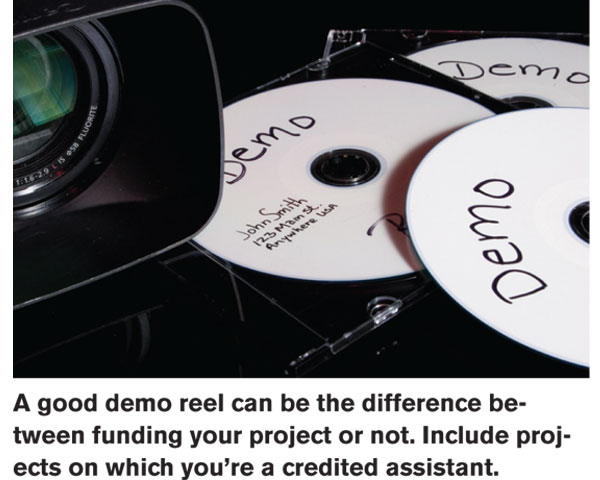 Funding documentary films through grants and foundations can be quite difficult at best. Even more so if you are an inexperienced filmmaker. Funders want to know that you’re going to be able to deliver the goods and complete the project. Experienced filmmakers with a solid demo reel have proven themselves already. You – the inexperienced or even first time filmmaker – haven’t. So, what do you do?

Drop a Name
Is there an experienced filmmaker in your area that you can rope into being an executive producer on your documentary? Especially one who’s successfully received funding themselves, perhaps even won an award? Attaching their name – and their demo reel – to your project will go a long way toward reassuring potential funders that it will indeed be finished. Don’t forget the power of a voice. Many celebrities lend their voice to documentaries that are on a subject that is close to their hearts. Getting a celebrity to do your narration can boost your video to a higher echelon that can get you better funding and the notice of the right festivals.

Establish Your “Street Cred”
If you’re a first timer you might consider working on someone else’s project (preferably not another first timer) to gain some much-needed experience. When you’re ready you can volunteer to shoot a short documentary for a local non-profit. They will be ecstatic and you will get to test the waters as a real-for-true filmmaker. To keep costs down shoot it all by your lonesome with a single camera. Get some great shots of what they do; if they’re an animal shelter or provide hot meals to the homeless, show them doing these things. Interview the people on the front lines as well as the folks they’re helping. Show their emotions, their joy, their tears. Pay careful attention to filmmaking fundamentals such as proper, steady, handheld techniques, exposure, white balance, good lighting, don’t zoom while shooting and, by all means, get great audio. Edit all this together into the best mini-documentary you can manage. If editing is your weak suit then hire an experienced editor. Do a great job here and you will be able to show potential funders what you’re capable of. Do a poor job and you’ll still be showing potential funders what you’re capable of; so do a great job!

Get Your Ducks in a Row 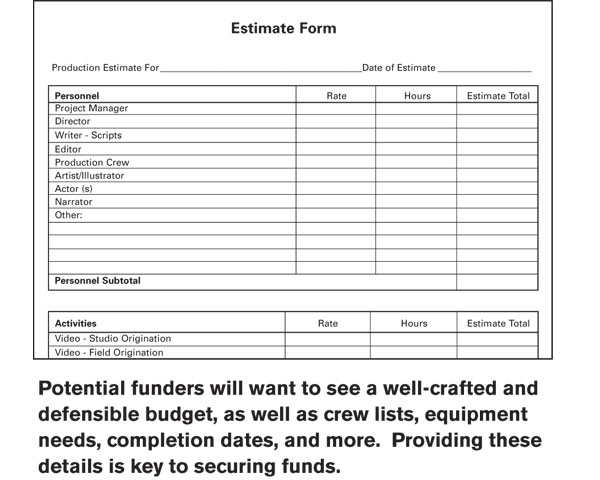 Now that you have some experience tucked under your belt and your demo reel tucked under your arm, what’s next? While researching potential funders be sure to check out their website and find out exactly what information and documentation they require in addition to your application. Be prepared to provide a cover letter, a description of the proposed film, your projected budget, crew list and your demo reel.

Your cover letter should provide a brief description of the film, an overview of the budget and what exactly you are requesting from the funding organization. This may be a specific amount of money, equipment, services or any other thing of value. And very importantly, show how your project supports their mission. A more detailed description of the film should be included providing a thorough one-page account of what it is about, who your target audience is, the entire production and post-production schedule and your expected completion date.

Funding organizations will want to see a thorough, detailed budget, showing all expenses and expected income for the project. Do plenty of research here to be sure to include everything and locate accurate cost figures. Include things like costs for research, crew, media, talent, equipment purchases and rentals, travel and lodging, insurance and permits, administrative costs and promotional and distribution funds. And don’t forget to include you. Funders want assurance that the project is going to be completed. In their mind, if you aren’t being paid, then you’re off working a full time job and the likelihood of the project being completed comes into question. Finally, be sure to include a contingency cost of up to 15 percent of the total budget for when the unexpected happens.

Funders will want to see a crew list. Include names, positions and resumes of your key personnel. These would include the director, producer, camera and sound operators and editor. Remember that successfully funded, experienced, award-winning filmmaker mentioned earlier? This would be a great place to drop their name as your Executive Producer.

Lastly, be sure to include your demo reel. It should be brief, less than two minutes in length, and showcase your very best work – especially anything that relates to and supports the mission of the funding organization. And by all means, if you have already started shooting your documentary, be sure to include some of that footage as well. What better way to demonstrate what you can do with your proposed documentary than to show it already in progress? Funders want to see commitment and seeing that your project is already underway will demonstrate that nicely. 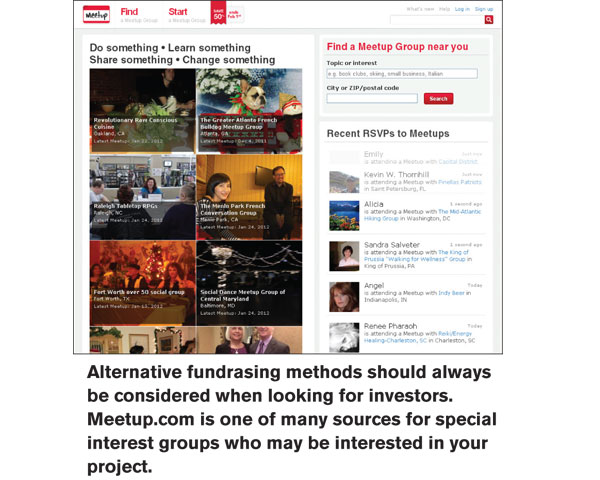 Don’t underestimate the value of asking family and friends to invest in your project. Even if they can’t help financially they can certainly help get the word out to others who may be willing to make a donation. Talk to anyone who might be a potential investor. Look for investment groups in your area; ask if you can make a presentation to them. Go to Meetup.com and see if there are any special interest groups who might be interested in supporting your documentary. Contact them and arrange to give them a presentation. Be sure to show how your documentary will align with their purpose and goals. Send out press releases and include a website address where donations can be made online. Use fundraising sites such as Kickstarter and IndieGoGo.

Funding documentary films can be a daunting experience to say the least but now that you have an idea of what’s out there and what to expect you’ll stand a much better chance of getting your project funded. Do your research, identify your audience, prepare your documentation and polish up your demo reel. Documentary funding is out there just waiting for someone to come along and claim it. That someone may as well be you.

If you need $100,000 to fund your project you can apply for a national grant or approach a foundation for the money. Alternatively, if you can find a bunch of people who will each donate a small amount you can achieve the same goal. This is the concept upon which fundraising sites such as IndieGoGo and Kickstarter function.

Filmmakers post a description of their project on the site and ask for donations. Incentives for donating certain sums can be added to reward donors for their generosity. These might include a film credit, a pre-release DVD or even a private screening of the finished documentary. People who are interested and want to see it completed can make donations. The site host takes a small percentage of each transaction and the rest goes to the filmmaker.

The majority of donations will likely be in the $10 – $25 range. But the Internet is a vast platform and you may possibly find yourself with more than you asked for. The following steps may increase your chances of success: