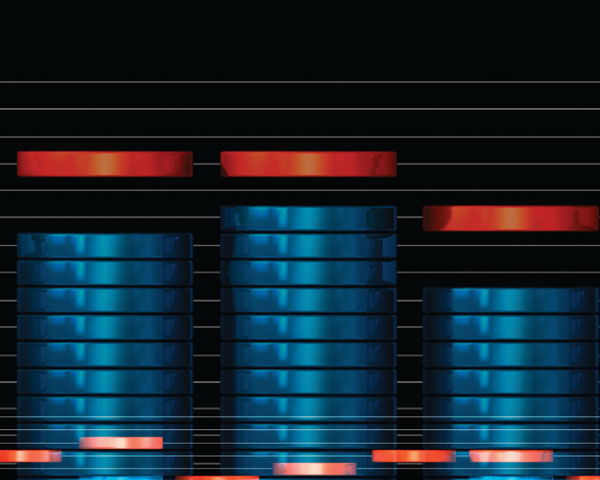 The popularity of HDSLRs, GoPros and other compact video cameras come with a new surge of interest in audio recording. Since many of these cameras record meager audio at best, it’s become common to go the extra mile and record audio on another device such as a portable recorder or computer. With new gear comes new questions and this renewed focus on audio may have a few people scratching their heads about proper audio levels, monitoring and mixing. Good audio practices are important whether you use professional editing software or just record audio for YouTube.

Audio recording equipment and software comes with its fair share of numbers and letters. Measurements are usually in decibels – abbreviated dB – but there are different reference levels, depending on your gear and where you are in the signal chain. You’ve probably seen the label 0dB on home recording equipment, a cheap audio mixer or your music editing software, but 0dB can be measured in different ways.

For instance, if you found an old analog audio recorder, it would probably have one of those retro needle-style meters. And, sure enough, there’s 0dB on the scale. But, depending on whether that recorder is consumer or professional, 0dB could be one of two actual signal levels. On consumer gear, it references a .775 volt signal while the professional level is referenced to 1 volt. Now, a quarter of a volt may not seem like much, but in the audio world, it’s pretty big – 14 decibels big. If you suddenly added or subtracted 14 decibels from your audio signal, you’d notice it.

Back in analog times, we recorded on magnetic tape and could push the recording level past the 0dB setting on a regular basis without any serious consequences. In fact, many recording engineers did just that to achieve “tape compression” – a mild overloading of the recording that usually provided a nice sound. This technique pushed the limits of the recorder and medium, but in the controlled circumstance of a studio, it was a calculated risk. If you’d like to hear an extreme example of analog tape overload, just listen to Led Zeppelin’s Whole Lotta Love. Around the four minute mark, you’ll hear a pre-echo of Robert Plant’s voice just before he sings. This wasn’t done in post. His voice was recorded so strong on the tape that the signal actually magnetized other tape layers below it on the reel.

Of course, today we record digital audio and it comes with its own set of rules. Digital audio has a hard ceiling that is measured as 0dBFS or 0dB full scale. Once you hit that level, there’s nowhere else to go. Think of it this way. Let’s assume we’re recording in 16-bit resolution. That means that each digital sample is 16 digits long. At any given time, any of those digits can be a one or a zero. When all 16 become ones, you can’t add any more. That is 0dBFS. When you push the audio level beyond that point, digital clipping occurs. This produces nasty distortion that effectively ruins your recording during the clipping.

To avoid digital clipping, it’s good practice to keep your recording levels well below the ceiling. A common setting is -10dBFS. This gives you some headroom for inevitable peaks and still keeps the signal loud enough to avoid noise. It’s not exactly intuitive at first, but by standardizing on this level, you’ll record consistently clean audio that is easy to work with in post.

As an added safety measure, dig through the audio menu of your camera or digital recorder. Many devices include a signal limiter of some kind. Normally, you want to record audio without any kind of processing – reserving that for post – but applying a limiter can save the day from time to time. Limiters only work when the signal reaches a certain level – usually 0dBFS. Any incoming signal level above that point is lowered to eliminate clipping. Most built-in limiters don’t sound as good as their post-processing cousins, but they’re only working on extreme levels and won’t affect normal audio. A lower average recording level and a safety limiter is a powerful combination.

Back In The Suite 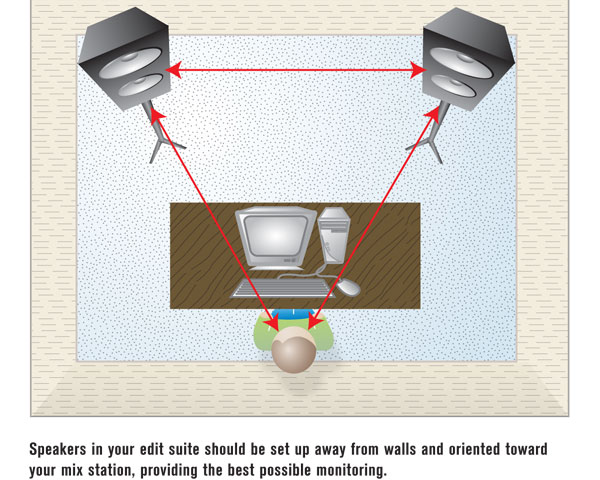 The term edit suite used to mean a dedicated space for editing audio and video. Things are a little fuzzier these days. An edit suite might be a laptop in the front seat of your car or a desk in the corner of a bedroom. In the corporate environment, your editing computer might be primarily used for word processing and spreadsheets. In any of these situations, audio monitoring is a secondary concern. However, if you have the convenience of a dedicated editing space, a proper audio monitoring setup is essential.

A real edit suite would be set up much like a recording studio, with acoustic treatment, specialty speakers and equalizers to match the speakers to the room. But you can still get good results without spending a boatload of cash. If we rule out $20 media speakers from your local office supply store, or the freebies that came with your desktop, pretty much anything else could work. Your main criteria is trustworthy sound; something that sounds good with familiar material and won’t wear you out after extended listening sessions. If possible, mount your speakers on stands, away from walls. This minimizes audio reflections and gives you a more accurate audio image. Stereo speakers should be set up in a triangle – with equal spacing between the speakers and your mix position. Whether you mix your audio using speakers or headphones, use conservative volume levels and compare your mix to “real” television shows. This is a great reality check. Finally, if you can route your video mix to a TV, listen on those speakers too. Yes, they sound terrible, but this is how most people watch video. If your mix sounds good on the monitors in your edit suite and ordinary TV speakers, you have created a great mix.

And the Answer Is…

A lot of people have spent a great deal of time and money defining how loud is too loud. These standards are primarily for delivery – either through acoustic output or electronic measurement. But the concept carries all the way through the production process – from acquisition to final product. If you can keep your capture levels lower, monitor properly and deliver a product that plays well on all systems, you’ve pretty much answered the question already.

In the past year, the FCC has implemented the Commercial Advertisement Loudness Mitigation or CALM Act. To boil it down, the CALM Act basically says that audio in commercials can’t be any louder than the audio during normal programming. Television stations and cable operators are responsible for ensuring compliance. So you can still make your commercials as loud as you want, but the broadcaster has equipment in place that will turn it down to meet the new rules. Better to create your content with more realistic levels and preserve the quality of the mix.