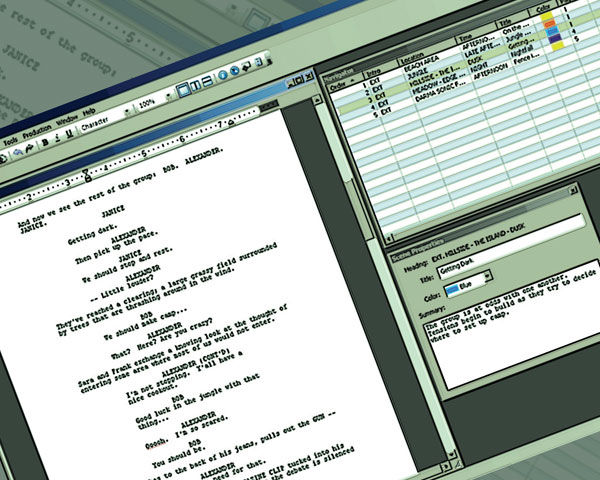 In the early days of movie and television production, a producer would come up with an idea and give it to a scriptwriter who would bang out the story on an old Smith Corona or Underwood typewriter. The use of carbon paper necessitated perfect typing skills and a scriptwriter’s job was both artistic and manual. When the IBM Selectric Composers came along, scripts were processed faster – the scriptwriter didn’t have to slow down to fix errors for the carbon copy, but they still lacked the instant rearranging that we can all do now with word processors. Many scriptwriters worked long hours into the night hacking their stories, and were often rarely acknowledged for the final film’s success. (But unfortunately, they might have been given blame for its failure.)

Scriptwriting was a true blood, sweat and tears artform, and once the scriptwriters’ job was done, the story would be given to a storyboard artist who would hand-draw visual representations drawn frame-by-frame of how the writer or producer envisioned the finished movie to be. Many of those hand-drawn storyboards are incredible works of art and some are even collector’s items. Most of the readers of Videomaker are Lone Wolf producers, not drawing artists; drawing isn’t exactly our forte. So, in the past, if we wanted good storyboards, we had to hire someone to draw them. Or, if we were desperate, we’d hand-draw stick-figures and hope they’d work. 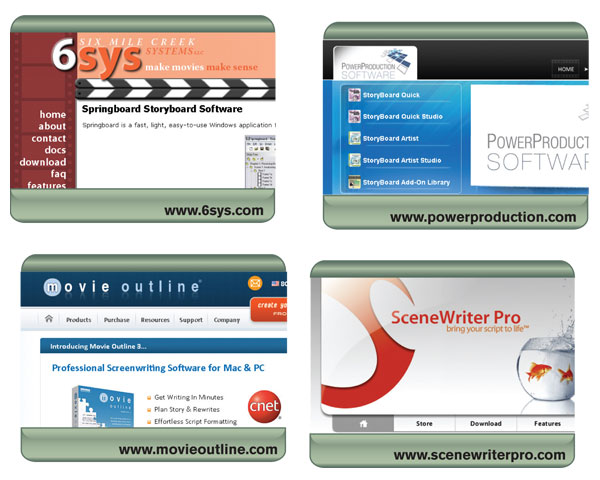 Gone are the days of scripts from Microsoft Word and hand-drawn storyboards. Today’s producers enjoy stream-lined workflows with software that caters to every task from scheduling to distribution. These time saving gems offer much more than drawing assistance to the doodle impaired, we’re talking, intricate drawing tools, character and scene memorization, and templates galore for every use from stage to screenplay to television and simple projects.

Even today, although you might not wish to hire a scriptwriter or storyboard artist, you still need to have a good plan worked out. This plan is your map to let other people know what to expect. If you are making corporate videos, and you might need to show your concept to the decision-makers, you need at least an outline.

Some storyboarding/scriptwriting software is strong on storyboarding, others are strictly for writing scripts. Others still are the bare basics – one step up from a word-processor, so your choices are plentiful, depending on your needs.

The good thing about scritpwriting/storyboarding software is that you can usually get a free trial version to download for a limited time or limited use. This is good, especially if you’ve never worked with this type of software before, because what works for you might not be what works for us.

Scriptwriting: Features to Look For 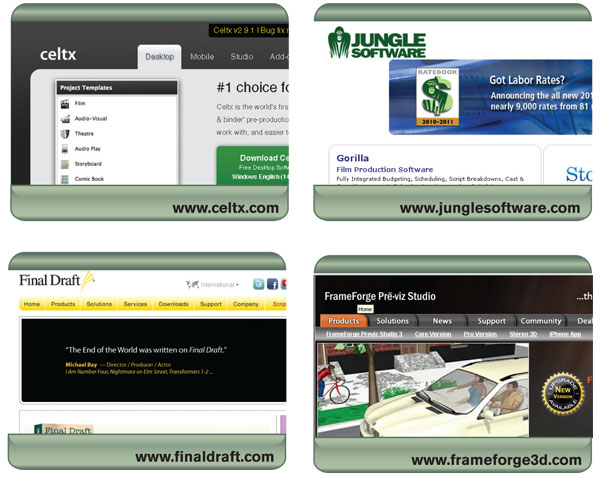 Regardless of whether you’re seeking scriptwriting software, storyboarding software or both, there are a few things to look for. Most of these programs have more than just “write a script here” or “draw a picture there” abilities. An Index Card feature is a nice thing to have. Just like the old time index cards you used to arrange your thoughts for that dreaded speech on Ponce de Len in your history class, you can make notes for each scene, and rearrange them to your heart’s content. Should you begin with the wide shot? Or reveal that after the shock of the extreme close-up? Index-carding helps you organize your thoughts. Hollyword and Movie Magic’s Screenwriter might be just what you’re looking for here.

Do you have a large variety of characters and need to keep track of who they all are, their backstory and costumes? There are index cards or ‘crib notes’ to apply pertinent information, so you don’t forget details. (Was Melissa a blonde or a redhead? Was Susan tall and moody or petite and bubbly?) Details that in the beginning of your story might be obvious, but as you add characters and flesh them out, then add props and more dimension to your plot, you might forget some of these details later on. Letterbox and SceneWriter Pro are two programs that let you track character details.

When you move into the higher-end programs, you’re going to have more feature-rich toys to check out. Do you collaborate with other writers/video producers? ScriptBuddy and Final Draft both have a process that allows you to work with someone else who doesn’t have to be in the same building or even city. You write the script, load it to the cloud, and your partner can make changes, add notes and update the script.

Finally, the layout of the script is important and you need to know, again, if you are going to use a simple Microsoft Word-type program, or do you want a real script layout. For instance, a script design for Radio or TV might have a two-column layout: notes and talent descriptions on the first column, and dialog on the second. That same script, laid out in a film format, will have a subject’s name in the center of the page, with dialog right beneath. For programs likes these, keypad shortcuts will automatically format the design for you. A very nice feature for shortcut writing, so you can create, not metadate!

Often called “pre-vis” for previsualization, some programs will have only a rudimentary art pad for stick figures and camera direction, but once again, this might be all you need. At the very least, you want to look for something that you can draw arrows pointing our screen direction, which also include designs for camera movement like zooms and pans. Believe it or not, when you’re working on a small budget, a storyboard is not a luxury, it can save you time and money because it shows everyone involved the idea that lives in your head.

Atomic Learning Storyboard Pro is free, and has a few features that might be all you need, and if you want to go whole-hog with 3D pre-vis, well, the sky is literally, not just virtually, the limit when you look at Google’s SketchUp where you can actually import satellite visuals from GoogleEarth. And if you really want some true 3D modeling, look to Storyboard Lite and FrameForge 3D.

For some good ideas about how storyboards are laid out and used, watch some of the DVD extras on some well-known movies. Many movies you can rent on DVD have extras that offer director’s commentary, behind the scenes footage and pre-vis details – a valuable learning tool that you don’t have to go to film school to gain knowledge from. Here’s a look at a few programs worth checking out:

Celtx Plus: This spiffy little multitasker allows the user to write scripts, storyboard scenes and sequences, sketch setups, develop characters, breakdown and tag elements, schedule productions, and prepare and circulate informative reports for cast and crew. It’s iPhone and iPad friendly and its bundle is $15. A free version is also available.

Final Draft: Final Draft is the number one selling application specifically designed for writing movie scripts, television episodics, and stageplays. It combines powerful word processing with professional script formatting in one self-contained, easy-to-use package. Final Draft automatically formats your script to industry standards as you write. Its $249 and has a free demo version.

StoryBoard Quick: Storyboard Quick allows the user to import a script from any professional scripting software, choose the type of shot per scene (15 shot styles included), select the customizable actors from a Character’s Palette library, rotatable props from and expandable library, pick a location for the scene (Interiors and Exteriors or your own photos), and awesome export capabilities, including HTML. If drawing isn’t your bag, Storyboard Quick is available at $300.

Toon Boom Storyboard Pro: Storyboard Pro allows artists to conceptualize the story and bring it to life as animated storyboards. It boasts vector-based drawing tools with pressure sensitivity when connected to your tablet and preserves your own style with ink brush, air brush or crayon texture brush. Keyframe any object and enjoy onion skinning, multi layer Photoshop imports, overlay time code, and real-time playback. Toon Boom’s Storyboard has the ability to define start and end camera positions, and zoom and rotate on-the-fly. It can integrate with your editing program making it one of the most powerful storyboarding bad boys on the market. While Storyboard offers superb drawing and creation strength, it offers various user profiles so it can aid Directors and Producers, Game Designers, and Communication Specialists. Its Pro version is $900.

Remember, unlike cameras, tripods or light kits, your storyboarding and scriptwriting needs are the most varied. Check out the trial versions of as many as you can before you buy. For some, the free programs might be all you need. For most, a middle-of-the-road program is good enough. For some of you, learning the work-around on the most robust programs is your ticket to Hollywood, and now you can leave the art pads and Selectrics at home.

Decide your workflow needs and budget then research the perfect fit. Create and convey via today’s hand-holding work horses and consolidate yesteryear’s notes, napkin doodles, and ridiculous production binders. Pre Production. All of it. One file. Sweet.

Jennifer O’Rourke is Videomaker‘s Managing Editor and Grinner Hester is a lone wolf producer and one of Videomaker‘s Forums moderators.