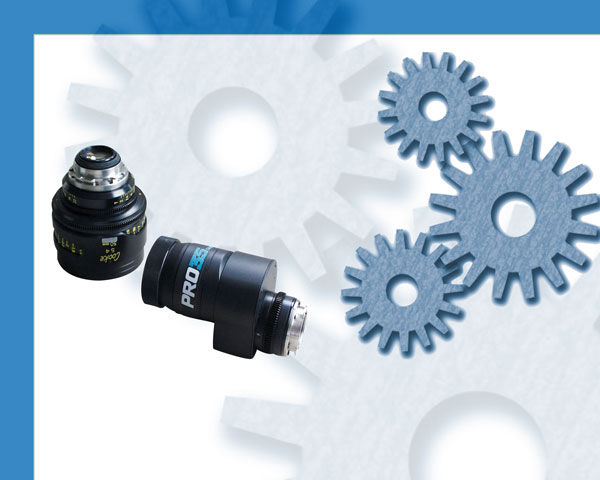 The ability to add high quality 35mm lenses to a professional, prosumer or consumer camcorder can give more control over the depth of field, which is the range of focus in a shot. This will help in achieving a film-style short focus usually reserved for more expensive cameras and lenses. We will discuss how these adapters work, and provide some lens recommendations.

When using cameras with fixed zoom lenses, such as the Sony EX1, the Canon XF300 or the Panasonic DVX100, it’s difficult to get the classic “short focus,” or shallow depth of field look, which is when the subject in the frame is in focus, while the background and foreground are blurred. Usually, a filmmaker or videographer would have to “cheat it” to get the effect, by positioning the camera further from the subject, zooming the lens in and opening the iris as wide as possible. It works, but it’s never quite as effective as using 35mm lenses.

35mm adapters with interchangeable lenses offer a better and affordable solution, freeing up the producer to shoot more cinematically without the worry of “cheating” to get the shot. A properly lit video or digital film, combined with a skilled director of photography working with a 35mm adapter and quality lenses, can make a project appear more professional. It increases the value of the project without spending more money on high-end cameras, lenses, gear and crew. 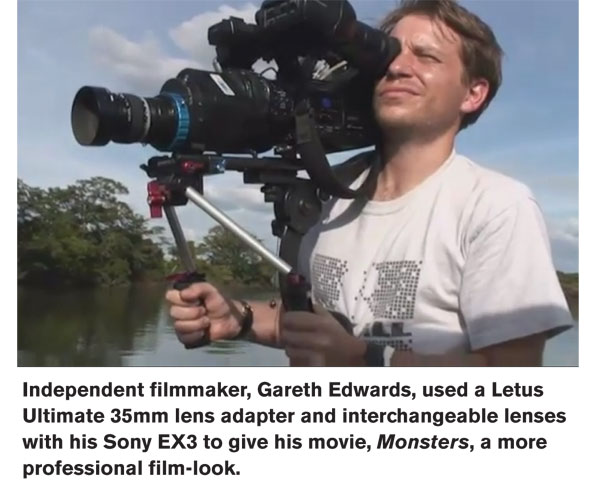 In his recent independent film, Monsters, Gareth Edwards used a Sony PMW-EX3 camera with a Letus Ultimate 35mm adapter and interchangeable lenses to give his movie a more polished look. Critics and viewers alike asked if he shot the film on 35mm film, thanks in part to the adapter and lenses. The movie was acquired by an independent studio to be released nationwide, and Edwards is being hailed as the next Neill Blomkamp, who wrote and directed District 9.

The 35mm adapter connects to the camera’s stock lens; from there, you attach the lens mount and 35mm lens of your choice, using rails to keep everything in place. Turn the 35mm adapter on, and you’re ready to shoot. The adapter will either vibrate or spin, depending on the device. What this does is hide the appearance of the ground glass, which can look almost like sandpaper when the adapter is turned off. Chances are, it may not work perfectly the first couple of times the rig is used, but practice makes perfect.

When choosing an adapter, keep in mind that spinning units don’t limit the f-stop going beyond f/5.6, all the way to f/16 or higher, while the vibrating ones have image streaking problems when closing the iris further. In that case, keep the iris wider, around f/1.4 to f/5.6 to avoid those issues.

With cameras featuring interchangeable lens (with sensor sizes of 1/3-inch, 1/2-inch or 2/3-inch), users can attach the Letus rig directly to the camera with a special relay lens, eliminating the need for the stock lens. The relay allows the adapter and 35mm lenses to work properly, and resizes the image to be read properly by the sensor. The P+S Technik Pro35 and the Cinevate 2/3-inch B4 Mount Relay Unit provide this, as well, but only for cameras with 2/3-inch sensors, like the Panasonic HPX500.

There are several 35mm adapters available, some of which were developed by filmmakers wanting to add a more professional look to their projects. They include M2 Encore from Redrock Micro, Letus’ family of adapters, the Brevis35 from Cinevate and P+S Technik’s PRO35. Prices and features vary between the companies’ models, but they all achieve the same goal of providing more depth of field control with 35mm lenses.

One more note: 35mm adapters can now orient the image properly, so there isn’t any need for vertical “flipping” in post-production. In the past, the image was recorded upside down, but the manufacturers have since fixed that problem. 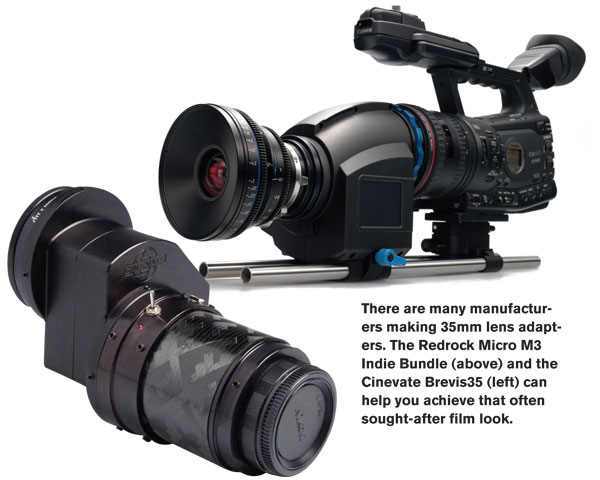 Lenses play the most important part of the equation with 35mm adapters. They allow more control of the depth of field, which can help soften the background image slightly, giving the video a more cinematic look. Two of the most common brands used are Nikon and Canon SLR lenses. Both offer excellent optics at an affordable price, and filmmakers, directors of photography and videographers seem to prefer either one rather equally. Zeiss also makes quality SLR lenses, and several 35mm adapter manufacturers sell these particular lenses.

Whichever brand of lenses you choose, make sure you get the right lens mount, so there aren’t issues with trying to attach a specific lens to the rig. Each 35mm adapter manufacturer has a list of the lens mounts that correspond with the specific brand. There are also “step rings” that may be required for cameras whose lens sizes differ from the device.

Cine lenses are another option and can reduce common lens issues such as distortion, but the price is much higher. While a Zeiss SLR 50mm lens may cost between $700 and $1100, the Zeiss 50mm Cine lens can cost upwards of $4,000 to $5,000. Renting these lenses is an excellent and affordable option.

Once you’ve decided on which type of lens you’d like to use, SLR or Cine, you then need to decide if you want to use prime or zoom lenses. A prime lenses’ focal length is fixed, which means you can’t zoom it in or out.

If users want to shoot with a wider prime lens, they can attach, say, a 28mm lens. This will show off more of the shot, but at the same time, the depth of field is in deeper focus, where everything in the frame is sharper. The f-stop of the prime lens is usually set at f/1.4 or f/2.8, and can be adjusted if the scene is too bright or if deeper focus is desired, up to f/16. Keep in mind that adapters that spin don’t limit closing the iris past f/5.6, while vibrating ones do.

If you plan on changing the shot from a wide to a close-up and you want to achieve the cinematic short focus, you’ll need to switch lenses again, to an 85mm prime lens or higher. The 85mm is a popular medium telephoto, which is great for shooting close-ups. The f-stop is set at f/1.4 and can be adjusted to f/16. Changing camera angles can usually lead to changing prime lenses, which is a time killer.

The best lenses to buy are the ones that are a little bit pricier, or older SLR lenses that are made of metal and glass. Plastic lenses for entry-level Nikon and Canon DSLRs won’t cut it. We also recommend getting at least one good zoom lens to cut down on switching out lenses, but an SLR zoom isn’t as smooth when zooming in or out as its Cine lens counterpart.

There are, of course, some disadvantages that need to be pointed out. One of the biggest is the issue of having “glass in front of glass,” (i.e., lenses in front of lenses). With the camera’s stock lens, the adapter and the interchangeable lens mounted together, there can be a significant loss of light. With some devices, such as Redrock Micro’s (loss of about a 1/2 stop of light), it’s not too bad; in others it’s one or two f-stops, making it tough to shoot in dim light. The best way around this is to provide more light, or increase the gain slightly. Most cameras can have the gain raised up to about 6dB without noticeable noise appearing in the image.

Another disadvantage one should be aware of is potential vignetting, when a shadow is seen creeping into the edges of the image. This can also be used for a positive effect, but most times it won’t be. The issue can be resolved by zooming in the camera’s stock lens slightly. Chromatic aberration, where streaks of color appear in parts of the image, is also a potential problem. One more thing to watch out for is just how bulky the camera, 35mm adapter and lens rig can be. It’s long and heavy, so be careful carrying it. Run-and-gun shooting can be trickier with this type of set-up, along with the time it takes to change lenses. It can be done quickly, relatively speaking, by following plenty of practice.

Though we believe the advantages far out-weigh the disadvantages, it’s prudent to be aware of possible limitations, so filmmakers and videographers can make better video. Always have the camera plugged into a calibrated monitor to ensure awareness to any issues that may come up.

The main reason for using 35mm adapters has always been price. In the past, cameras with the ability to change lenses were expensive and inaccessible to most independent videographers. With the advent of DSLRs that can shoot full HD video and prosumer camcorders with interchangeable lens capabilities, it’s possible to buy an interchangeable lens camcorder for the same or similar price as traditional fixed lens camcorders. Some popular models include the Canon 5D Mark II and the Sony NEX FS100U, which has the ability to record audio through a standard XLR input. These kinds of cameras allow you to switch between high quality lenses without losing light or getting chromatic aberrations in your shot. However, they often lack the features that make camcorders easy to use such as XLR inputs, dedicated external controls, and longer record times.

35mm adapters and interchangeable lenses can give filmmakers and videographers a more professional image by providing more options with 35mm lenses and control over the depth of field. However, users should know how the adapters operate with their cameras and chosen lenses, practice working with the unit and know the limitations and how to work around them. The resulting footage will appear to have been shot with a more expensive camera and lens setup.

Heath McKnight is Senior Writer at TopTenREVIEWS.com and a filmmaker. He co- wrote VASST’s two best-selling books on HD production.