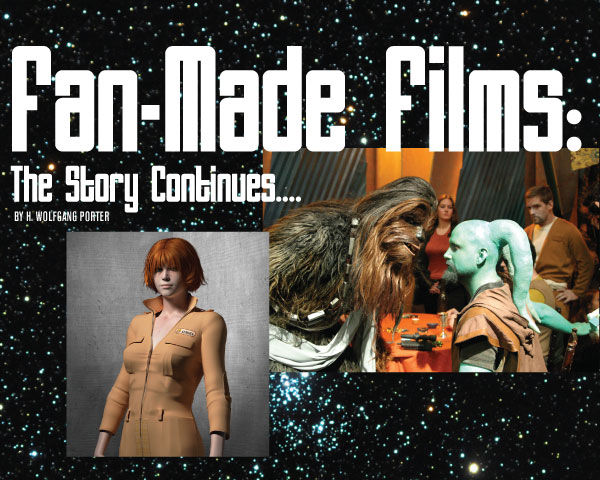 Deep within a burning stronghold, a lightsaber hums ready for battle. In the darkness of deep space, locked phasers target an enemy ship. For thousands of fans including myself, those descriptions easily conjure up scenes from two of the most profitable theatrical and television franchises of all time: Star Wars and Star Trek.

Many of the two franchises’ legions of fans are either actively working in the Video and Film Production Industry or want to. The enthusiasm for the characters and stories inspired by these science fiction sagas have led to hundreds of fan-made low budget films being created every year. 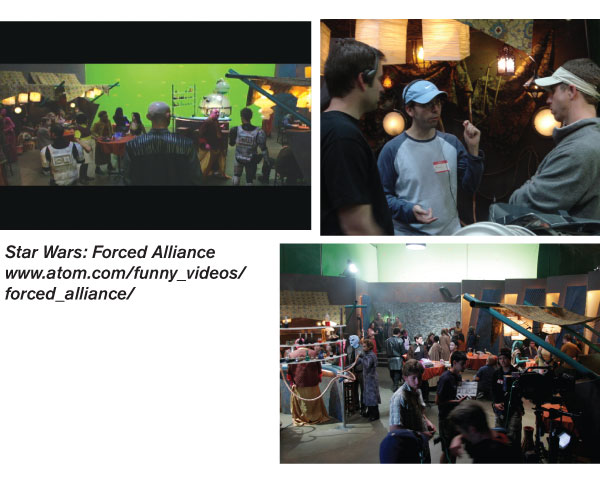 With cameras, animation software and non-linear editing systems being accessible to anyone with an ‘idea’, fan filmmakers can make their interstellar dreams come true. Distribution of fan films is easier than ever, with the help of video sharing sites like YouTube and Veoh. Among the massive amount of SW and ST fan films, two standouts are the film Star Wars: Forced Alliance and the animated internet series, Star Trek: Aurora.

Both productions are extremes concerning manpower and production resources used. By Hollywood standards they are considered “low-no budget” films. Yet, the high quality (or ‘production values’) of both projects clearly shows what fan filmmakers can achieve. 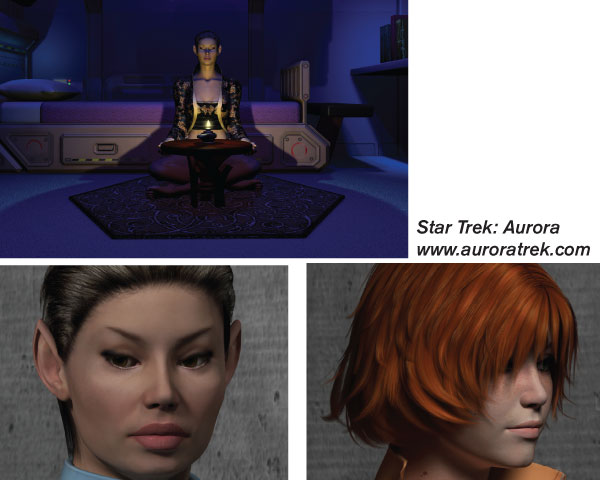 On the ‘high-end’ is Forced Alliance by Randolph Bookman and Gerry Santos. The short film set in the time after Return of the Jedi centers on a rough and tumble cantina and two fugitive Sith trying to contact the reformed Jedi Order. Amidst the many authentic-looking costumed and specially made-up actors, Forced Alliance has the look and feel of a ‘real’ SW movie.

On the no-budget end is Tim Vining’s 3D animated series, Star Trek: Aurora. The short animated films set in the later years of the ‘Kirk and Spock’ era, focuses on a human/Vulcan pair of female cargo haulers and their hundred year-old starship Aurora. Despite having no budget, Aurora also gives the viewer the look and feel of an authentic ST film.

The two projects couldn’t be more different from each other. What makes them similar is the high degree of dedication to the work great fan-made films possess. As a filmmaker, I wanted to know what motivated these individuals and the tools they used to do their work. I was fortunate to talk with the films’ creators about those very things:

Is filmmaking your primary job?

Gerry Santos [SW: Forced Alliance] – Yes, I work as a Production Manager and I make independent films between jobs.

Randolph “Randy” Bookman [SW: Forced Alliance] – Yes, I also work as a Production Manager and as an Assistant Director.

Tim Vining [ST: Aurora] – No, it’s not my primary job. It’s a big part, however. I’m actually an Illustrator and manage the Medical Illustration Department of the firm I work for. I’m their Primary Video Editor as well.

With such high production values in your films, why create fan films instead of original works?

Randy – Originally Gerry and I were between jobs and wanted to do a movie of our own. We decided to make a Star Wars film not as a fan film, but a ‘pitch film’ after hearing about a live action SW series to be made in Australia. Once word got out we were making a SW film, people got excited and serendipity helped us get it made.

We got invited to a local museum’s SW party and met George Lucas. He was very nice and offered to look at the film when we got it completed. He’s revolutionized filmmaking and it was awesome meeting him.

Gerry – Everything definitely started rolling after meeting George Lucas! People got really excited about the project and we got so many people and so much gear for next to nothing!

Tim – I wanted to do something people were already interested in. I was halfway through making Aurora‘s first episode when I heard other people were making fan films. It would have been depressing to have done something original and no one wanted to watch it.

Randy –I’m sure we wouldn’t have gotten the same response from people if we had made an original work.

What tools did you use to make your films?

Tim – I use an off-the-shelf Intel-based iMac and Final Cut Pro because I’m more familiar with them, but I also use a motion capture system that is PC. My workflow includes Poser, which I make my characters with, Cinema 4D to build sets, Apple Motion to do smoke effects and (Adobe) Photoshop.

Randy – We used a Sony F-900 High Definition camera because we wanted to show we could shoot Forced Alliance the same way Mr. Lucas did the last three SW films.

Gerry – We used a mixed bag of software and platforms despite doing our main edit in FCP. We needed to get the work done, so we based all our clips on QuickTime. Everyone used software that could output clips to QT so it wasn’t a problem to work cross-platform.

What tips can you give potential fan filmmakers to help them complete their films?

Randy – Follow through and be prepared to make compromises. Also be prepared to reschedule. I hate pre-production, but it’s very important! Keep a daily/weekly calendar to keep up with your production goals. Lastly, be excited about your project. If you aren’t, no one else will be.

Tim – Don’t spend ninety percent of your effort to get the last ten percent of perfection. You’ll drive yourself crazy. Your film will never be exactly the way you want it, so have fun during the creative process. Also, don’t be afraid to ask for advice. There are a lot of people who already know about what you’re trying to do so don’t go it alone.

Will you continue to make fan-based films?

Tim – Yes, because I enjoy doing this. I like the characters I’ve created and I’d like to do a full series with Aurora. I felt it would be an interesting way to explore the Star Trek Universe through the eyes of ‘space truckers.’ Because I’m doing this alone, it takes a lot of work to complete an episode, so I do get frustrated sometimes. The reward is, I’m doing it for the fans.

Gerry – Making Forced Alliance gave us a lot of ‘street credit’ for making movies so we don’t need to make another fan film. However, we aren’t opposed to making a follow up to the film.

Randy – If someone wants to pay for it or George Lucas wants to bring us onboard, yeah! I’m completely happy with what we did and we’ve gotten some awards and fan mail. Making Forced Alliance opened up a lot of doors for us, but I’d rather do a different kind of film.

I completely agree with these filmmakers and have a better understanding of why fans go through so much trouble making their films. For those of you who want to make your own fan-made films, only your resourcefulness and perseverance limit the possibilities. There are thousands of other people out there with fan clubs and resources who share your dream. Once you start the ball rolling, you’ll be surprised at who’s willing to help.

Making fan-based films is a labor of love. I too wouldn’t mind having my own “Jim Kirk” or “Darth Vader” moment. So like so many others, I may “turn to the dark side” and make my own fan film. Until then, I’ll keep phasers locked.