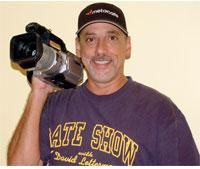 An update on how a web producer became Metacafe’s top earner in just 16 months.

We first told you about Kip Kedersha in our Producer Profiles: Behind the Lens feature in the February 2008 issue of Videomaker . In 2006, Kip began making videos for Metacafe, which pays producers for their content based on number of views. Sixteen months later, Kip hit the six-figure mark in earnings, bringing in more than $100,000 with his video tips. Kip is the top-earning producer at Metacafe and has created more than 97 videos, with more than 18 million views. His most successful videos are how-to’s like Laser Flashlight and Trigger Green Traffic.

We recently spoke with Kip on his success and with Metacafe’s CEO Erick Hachenburg on how you, too, can follow in Kip’s successful footsteps.

VM to Kip Kay: How long have you been producing videos?

Kay: While I have been producing videos for the internet since October of 2006, I have 25 years of video production experience and have produced TV commercials, infomercials and a variety of video projects.

VM: Did you settle on a quick formula? What makes your formula work for you?

Kay: In the early days, the formula was pretty straightforward, since the how-to video market had not been explored that much. Since then the formula has changed and will continue to evolve as the viral video world evolves. What makes my formula work now is that I have a huge, worldwide fan base and multiple outlets for my content.

VM to Erick Hachenburg: How does the program work for video producers? Do they earn per download/click?

Hachenburg:The Metacafe Producer Rewards program is open to any creator of an original video that meets the program requirements. Once an eligible video crosses the 20,000 views threshold and is accepted into the program, the creator receives the first payment for $100. And that video continues earning $5 for every 1,000 views it receives on Metacafe going forward.

VM: How much do they earn?

Hachenburg:Earnings on Metacafe are a direct reflection of how entertaining and engaging the video is to our audience of 30 million unique monthly viewers. Creators of original videos get paid for their best work, as judged by the audience. The requirements for the video to reach the 20,000 views threshold and have a VideoRank of 3.0 or higher (out of a 5.0 scale) tell us that this video is in fact entertaining to and popular among our viewers. As long as the video is on Metacafe and continuing to gain views, we pay creators for those views – $5 for every 1,000.

VM: Kip is a prolific producer. Are other producers making large numbers of videos?

Hachenburg:Kip joined our Producer Rewards program early in its inception, but we have since grown the program significantly and do have other creators who are producing an impressive number of videos. A few examples:

VM: How does one go about “selling” to Metacafe?

Hachenburg: It’s not about selling to Metacafe. Our audience determines the videos showcased on the site and which creators earn money. Our mantra is “people-powered entertainment,” and we use audience feedback every step of the way in creating the Metacafe entertainment experience.

VM: What makes one video more successful than another?

Hachenburg:To earn money through the Producer Rewards program, the keys to success are:

VM: How can a video producer find out more?

Since our original story, Kip has been written up in the New York Times and countless other news media. He originally used the Metacafe funds to pay for his son’s college education, but they are now his main source of income. He is one of many producers using Metacafe’s business model to earn money and notoriety. Nowadays, video producing is more than just a hobby, Find Kip at:www.kipkay.com

Jennifer O’Rourke is an Emmy award-winning videographer and editor and Videomaker‘s Managing Editor.