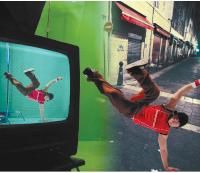 Without a doubt, you see chromakeys used countless times – probably every time you watch the news on TV – and perhaps you aren’t even aware of it.

Chromakeying is a process widely used throughout the television industry to merge (composite) one image (often a live one) with previously-shot footage or graphics and make it look perfectly natural. For instance, you see the weather forecaster on the evening news pointing to various locales on national or local maps, while advising you of what weather conditions to expect. In reality, however, he or she is actually pointing to a blank green wall while the map, animation and graphics are electronically composited with the live image of the forecaster. Chromakeying is another visual magic trick that’s easy to do with video to achieve impressive results.

Originally, the motion picture industry used blue screens extensively for chromakey compositing; hence, they called the process bluescreening. Bright green has some technical advantages over blue for the process, so green has become the predominant color for chromakeying, which is frequently called – you guessed it – greenscreening. While other colors are occasionally used for specific purposes (such as when the subject is green), green is the runaway favorite and most-used color for chromakeying. Regardless of what color you use, the process basically involves keying that one specific color (or a small range of it) to make it invisible or transparent when composited with another image. Generally speaking, green is used for video work, whereas blue is favored for film work.

Shedding Some Light on Chromakeys

There are several video software packages available with chromakeying capabilities. As is usually the case, the capabilities are commensurate with the price of the software, and some of these programs can do things that are really amazing – all at a price, of course. One of my favorite programs, and the one I used for purposes of illustration here, is Adobe Ultra CS3.

Regardless of which software package you use, there are some important things that make your chromakeying look natural and believable. First and foremost, shoot your footage in crisp focus, and light it adequately and uniformly. It is also very important to light your greenscreen background uniformly and insure that it is as smooth as possible. When these elements are as good as possible, you increase your chances for successful chromakeying.

Preplanning is essential with any production, and chromakeying is no exception. First decide what image elements you want to combine, e.g., what the live or foreground image is and what the background will be. Don’t forget that the background image can be either static or moving. Whether to go with a still background or a moving one depends a lot on what you’re showing your audience, so it is something else that you have to consider.

It’s also important to match the lighting mood between the foreground and the background. A brightly-lit foreground image shot in daylight against a dimly-lit background shot by incandescent light won’t look very natural or convincing. Unless, of course, that’s intentionally the look you’re going for. Adobe Ultra CS3 gives you quite a bit of control for altering the lighting, shadows, color, hue, saturation, gamma, transparency and other aspects of the keyed image, so you can really fine-tune things to make them work together for a very convincing composite, even if your two image sources are somewhat disparate.

The Ultra CS3 software includes a nice bonus in the form of assorted virtual sets. These sets let you place your foreground subject in virtual settings, such as a newsroom, museum, library, talk show stage or other cyber-locations. The package also provides a generous assortment of diverse stock background images. Additional virtual set libraries are available for separate purchase.

Of course, you can use your own image or video footage for background, if you wish. And you can combine it with the virtual sets, so the combinations and creative flexibility at your disposal here are quite extensive. Some of the virtual sets also have inset and overlay capabilities. These added features enable you to add a desk, podium or other prop device to the composite – even in front of the foreground image – to further push the illusory envelope.

The Whole Ball of Wax

I like to experiment with stuff and do what-if-I-try-this scenarios to see what it will look like, and I did so with Ultra CS3. I have a wealth of my own existing images and footage shot over the years (some of it in VHS-C and Hi-8 – you remember those video formats, don’t you?). So I decided to use them to see how convincing I could make things look. I was pleasantly surprised at the results, and I had a lot of fun playing with the possibilities, too. Before you look at the screen captures, here’s a quick run-through of what the chromakey process entails.

It is of paramount importance that your subject is not wearing anything that is the same color as that of the key! Why? Because it will also become invisible when the key is active and will disappear from the footage when you composite it, allowing the background footage to show through this area. Avoid jewelry or other objects that may reflect the greenscreen background color for the same reason.

Put as much distance between the subject and the key background as possible; this lessens the chance of casting shadows on it. I like to shoot outdoors on overcast days when possible, as I did with the foreground footage of my examples. This light is ideal, because it is diffused, it casts no shadows and it provides uniform illumination. What’s not to love about it?

You can use a live foreground subject, rather than one you’ve taped already, la live TV news broadcasts. However, using a taped subject makes things a bit easier. Live subjects get understandably bored and fidgety while waiting around between takes. This is especially true if you’re experimenting or adjusting variables in the production environment.

First, shoot your foreground subject against a uniform green background. For my chromakey backgrounds, I use a 4’x8′ piece of bright green polyester fabric I purchased for less than $20 at a local sewing and craft store. I like using the polyester for my greenscreen background because it folds compactly and any wrinkles smooth out quickly when it’s stretched and hung. Fabric backgrounds are also easy to mount, using push-pins or masking tape.

You can also use a painted wall or painted plywood sheets for your background. As I noted earlier, the backdrop doesn’t have to be green – it can be just about any solid color you want, although green works exceptionally well. The important thing here is to key a solid color that’s as uniform as possible.

Once the foreground subject is ready, select several regions in the background to key on. The reason is to create a color range that compensates for any shadows, wrinkles or other small variances in the background.

Next, select the background to use, whether it is a still image or moving video footage. Check the preview screen to see how the keyed foreground image looks against the background when composited.

Make any required adjustments to the keyed image, such as smoothing or sharpening the edges; adjusting the transparency, color, brightness and contrast; adding shadows or changing the overall position with regard to the background. If you’re using a virtual set capable of accepting an inset, drop in a still image or another video clip, and again check the preview. When everything meshes and looks right, you just select the desired output parameters, and export the composited piece. Then, you can do any additional post-production work, such as adding additional sound, titles and more, as you integrate the composited clip into your completed production.
So that’s basically how you do it. Now that you have a general idea of how the chromakey process works, go back to page 42 and look at actual screen captures on each page that show the various elements of the process, using Ultra CS3. Good luck!

Here’s my input clip loaded and ready for work. The white squares are the selected points to create a color range for the key.
(click to enlarge) 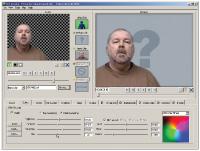 When I click on Enable, here’s what happens – voil – the green background disappears. I also tweak the brightness, gamma, contrast and other sliders slightly to adjust the image more to my liking.
(click to enlarge) 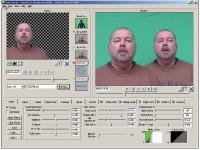 Now I add the background clip with the original green background still in place, make some additional adjustments and see the results on the preview screen at right. It’s fair to say that I’m beside myself here, having lots of fun with
my chromakeys! (click to enlarge)

Here I am in front of the famous Hollywood sign, and I never left my driveway in New Jersey! This is one of the many stock background images supplied with Adobe Ultra CS3 that you can use.
(click to enlarge) 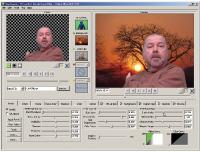 Changing my location from Beverly Hills to the plains of the Serengeti at dusk is as simple as loading another background image. Adjusting the light and color settings of the foreground image can help you match the background better.
(click to enlarge) 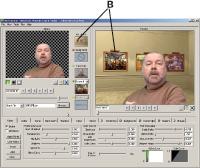 Here I loaded one of the virtual sets – the museum. The B on the left image of the virtual set thumbnail denotes an area that can accept an inset image. I adjusted the color control and post-processing sliders to make my outdoor footage work with this indoor virtual set.
(click to enlarge) 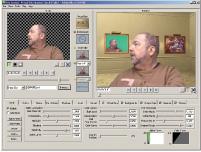 I put video footage in the B (Source B) inset, just to illustrate what it is possible to do here.
(click to enlarge) 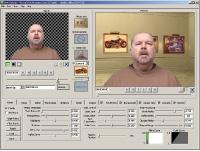 And here’s the same virtual set with a static image of a vintage Indian motorcycle instead of video in the B inset.
(click to enlarge) 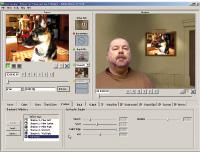 Here’s an image of my dog, Major, inserted into the B inset for another scene using the museum virtual set. I added some shadows (look at the sliders) to make the composite image a bit more convincing.
(click to enlarge) 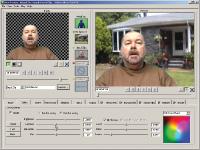 This is a composite of me in front of my house, but I need to adjust the lighting to make this look a bit more natural. And that’s easy to do using the sliders.
(click to enlarge) 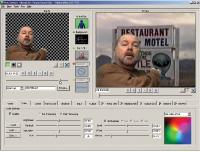 An example of mixing new digital (foreground) footage with converted Hi-8 analog footage (background) shot in Rachel, Nevada, back in 1995.
(click to enlarge) 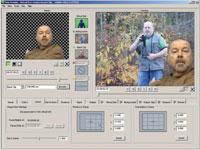 In the background, here is a still image of Survivorman Tom in the woods of New Jersey with the foreground composite footage placed low and to the right.
(click to enlarge) 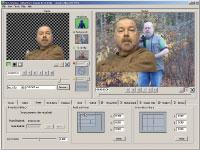 The foreground can be moved and placed anywhere you want it over the composited image, as I’m showing here, by using the Position in Scene control. You can also alter the orientation of the keyed image, if desired.
(click to enlarge) 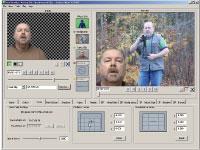 Here it is moved to the lower left over the background image, so you have plenty of creative flexibility and choices.

What I’ve shown and discussed here barely scratches the surface of the creative things you can do with chromakeying. As you learn more by doing, your skills will get better and so will your composited productions. Have fun!

To view the tutorial video for The ABCs of Chromakeys, click here.