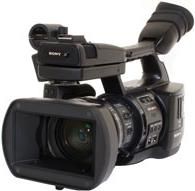 The rarified realm of professional video cameras used to require an outlay of $60,000 and up, and this was minus a lens. Adding decent glass to that package got you to $80,000 or more easily. But you got what you paid for when it came to image quality. The challenge of the independent video producer was to always balance the quality of the image with the cost of the gear, and most often quality lost. Sony’s Broadcast division has stepped up to try to meet that challenge: to make broadcast quality images, but to make them for less than $7,000. The result of that effort is the PMW-EX1.

The EX1 uses a fixed Fujinon 14x HD lens, and it has some interesting new features, not found on any other camcorder. First and foremost, the shooter will notice the focus ring. Most camcorders in this price range have a servo lens that rotates infinitely, which supports autofocus. While this is adequate for most work, the downside is that you never really know where your position is, and it can be confusing to manually change focus in the proper direction should the need arise. All professional cameras have a focus ring with hard stops and a distance readout that lets you know where the focal plane of the lens is directly, but they lack autofocus capability.

The EX1 splits the difference with its novel focus ring. In the forward position, the focus ring becomes a normal autofocus lens; however, sliding the ring backwards snaps it into full manual mode, with hard stops and absolute focus position marked in both feet and meters. You get the best of both worlds.

The EX1 also has a lens that allows you to control the zoom and iris manually. The zoom control is geared and marked in millimeters. You can select the zoom to be controlled manually by the ring or automatically by the camera’s zoom controller. The iris is also available to use manually and is marked off in the familiar f-stops. The iris ring offers a smooth rotational range and doesn’t snap from f-stop to f-stop, so you can dial in an exposure between say f8 and f5.6. The lens itself can keep its f-stop throughout the entire zoom range, not losing any light at the long end of the lens.

The stars of the EX1 are the three 1/2″ Exmor CMOS sensors that handle the camera’s imaging. A first for this form factor, 1/2″ sensors give you higher resolution and a shallower depth of field than the 1/3″ or 1/4″ sensors normally found in this level of camera. Before CMOS, 1/2″ CCD’s were too hot and power-hungry to fit into a small form factor camcorder.

Sony claims a horizontal resolution of an astounding 1000 lines, and while our charts went only to 800, I have no reason to doubt that claim. This camera delivered astoundingly sharp and detailed images, which you can download at the end of this article.

The EX1 records all of its images in the long GOP MPEG-2 format. Unlike its HDV counterparts, the EX1 can record in full-frame 1920×1080, using a 35Mb VBR compression called HQ mode, which, appropriately enough, gives the images their highest quality. It also offers an SP mode that follows the HDV standard (1440×1080 using 25Mb CBR) for compatibility with an existing HDV workflow.

Also new is that this is the first camcorder to record to Sony and SanDisk’s SxS memory card format. The camera comes with one 8GB card, while 16GB cards are also available. An 8GB card can hold approximately 25 minutes of HQ footage (35 minutes of SP), while a 16GB card doubles these numbers. There are two card slots on the camera, giving you a current maximum of two 16GB cards, which offer a recording time of 100 minutes of HQ (140 minutes SQ) video. Street prices on these SxS cards are approximately $500 for the 8GB model and $900 for the 16GB model. The SxS cards use the new ExpressCard standard interface, which is showing up on newer laptops. The EX1 also includes a USB2 port to get your footage out to a computer that may lack an ExpressCard slot.

The EX1 also allows incredible control of the image through picture profiles. These settings allow you to manipulate the color, gamma, knee and many other variables. You can store six different profiles on camera, each with a different look and feel. Already people are sharing their favorite profiles for this camcorder over the internet.

Because of the size and power draw of these new CMOS sensors, the EX1 uses a new battery format called the BP series. These new batteries use 14.4 volts instead of the 7.2 volts of the normal Sony NP series batteries, so you won’t be able to use your old batteries with this camcorder.

The EX1 has a full complement of inputs and outputs. On the audio side, it has 2 phantom-powered XLR inputs and a headphone jack, while on the video side you have HD SDI, component and A/V. On the data side, you have both FireWire and USB 2.0 connectors.

The very first thing you’ll notice about shooting with the EX1 is that, despite its form factor, this is not a one-handed camcorder. The camera’s size, combined with a slightly off-center hand grip really piles on the wrist strain. You will definitely need two hands or a tripod to shoot with this camera. The best handheld position turned out to be one hand on the handle and the other supporting the EX1 from underneath.

The next thing you’ll notice about shooting with the EX1 is the gorgeous LCD screen that Sony’s put on this model. Popping out from under the built-in microphone, it is 3.5 inches diagonally and it’s packed with a 1920×480 resolution. It also is easily viewable in full sunlight. The image quality you get from this screen is simply amazing, and it’s the first LCD panel that we felt accurate enough to judge focus for HD shooting. There is a standard viewfinder in the back too, but it pales in comparison to the resolution of the LCD screen.

The display options are bountiful; if they were all turned on at the same time, we rather doubt that you could see the image you were shooting. There are Zebra stripes (2 levels), peaking, histogram, audio levels, formatting guides, safe guides – all in addition to the standard battery, lens and media information. You can set up the EX1 to give you any combination of information you may require.

One display option that deserves special mention is the depth-of-field scale. This useful feature tells you exactly where and how much of your image is in focus. This is especially helpful as the 1/2″ CMOS sensors give much more control over this key image property, and once you start using it, you will miss it on any other camcorder lacking this feature.

Some of the buttons can be hard to reach, especially those under the lens, and the main power switch (Camera/Off/Media) is too easy to slide back and forth, usually taking two or three tries to turn the camera off. Also due to the heat that this camcorder generates, there’s a ventilation slot that runs through the side of the camcorder. While the camcorder itself is not exposed, and only the heat sink is open to the elements, we can’t help but feel this is going to be a natural place for sand, water and grit to collect. Sony has assured us that the EX1 will operate using a rain cover or an underwater housing that may block these ventilation slots.

With tape-based camcorders, we had gotten used to a run-up time, the time after you pressed record and before the camcorder actually started recording the scene. With HDV, this time had tended to get even longer. We’re delighted to find that, with the solid-state EX1, once you hit the record button, you start recording instantly. It’s little touches like this that make you miss tape a lot less.

With the myriad digital HD formats camcorder manufacturers are using, a new concern for any purchaser is: will I be able to edit with that format? The answer as of this writing is yes, if you are a Final Cut Pro 6.02 or Sony Vegas 8 user. If you use another software package, check for support for your system. You will need to download some drivers and software from the Sony site, but once they are installed, the system is fairly straightforward.

On our MacBookPro, we simply inserted the SxS card into the ExpressCard slot, copied the footage from the card to the hard drive using Sony’s transfer software, imported the clips into Final Cut Pro and edited away happily. The transfer speed from the card to a FireWire hard drive was about 1.3 x real time, so it certainly beat digitizing tape. Using the USB connector on the camera was just a bit slower. Another nice feature is that, if you shoot in the SP modes, you can use the FireWire port on the EX1 and control and digitize from it just as if it were a tape-based HDV camcorder.

Simply put, the images that came out of the Sony PMW-EX1 are the best HD video we’ve ever had come through our doors. While there are some concerns about the unit ergonomically, the EX1’s video performance, combined with the new SxS solid state recording system make this camcorder a strong contender in the eternal trade off of image quality versus price.