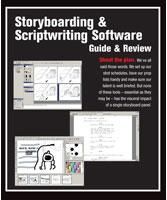 Shoot the plan. We’ve all said those words. We set up our shot schedules, have our prop lists handy and make sure our talent is well briefed. But none of these tools – essential as they may be – has the visceral impact of a single storyboard panel.

Thanks to the ubiquitous DVD extras on most major discs, the pre-production comic book-like art known as “storyboards” has become widely known. Studios pre-plan each scene meticulously, sometimes with dozens or hundreds of frames per sequence. This leaves the director and cinematographer with the relatively easy task of matching the live-action elements to the storyboard on set. It couldn’t be easier. Except, of course, for the fact that most people can’t create images like that at all.

Just because you’re not a big studio mogul or, heck, even a graphic artist, doesn’t mean that storyboards are beyond you. Now, with powerful new software packages on the market, creating professional-looking pre-visualizations has become easier than ever.

There are two major misconceptions about storyboards that scare a lot of directors away:

I Can’t Draw. Not planning a sequence because you’re worried about how pretty your storyboards will look is like turning down a ride on the space shuttle because you don’t look good in orange. Storyboards are a tool to help make your production run more smoothly. It doesn’t matter if all you can do is scribble stick figures in the margins of your script. All that matters is that you actively plan your shots in advance.

Storyboarding Every Shot Is a Lot of Work. You’re right, it is. That’s why you don’t have to storyboard absolutely every shot. How much of your project to storyboard is up to you and your professional comfort level.

Allow me to explain. Let’s say you’ve shot dozens of two-person conversations. You know the drill: Master shot. Shot over Actor A’s shoulder. Shot over Actor B’s shoulder. Mix in editing and let render for five minutes. Voil. Now, is there any reason at all to storyboard that sequence? Probably not.

By contrast, let’s say you’re shooting the climax of your big high school comedy. The bad guys have strapped a rocket onto the back of a turtle, which they’ve then duct-taped onto a rocket-powered skateboard. The script has this hapless reptile careening through the halls of a high school, terrifying Jock, Nerd, Cheerleader and the like. Chances are you’ve never shot a sequence quite like that before. In this case, storyboarding each and every shot will save you a lot of headaches on the day of the shoot.

So you’re sold on the idea of creating storyboards for key sequences of your project. You want them to look good, but you’re not a natural artist. How can that be accomplished?

A very common practice is to hire a graphic designer to re-work your scribbles into better artwork. That’s what Peter Jackson did on The Lord of the Rings. But what if you can’t afford to pay an artist, and don’t know any that will work on the cheap? Are you forever limited to the realm of Stick Figure Theater?

Fortunately, no. Thanks to packages like Frame Forge 3D, Storyboard Pro, Storyboard Lite and others, you can create some very professional-looking storyboards all by yourself… no artist required. These packages offer libraries of “actors,” common objects and even powerful 3D design tools to create the locations you’ll work with. Most importantly, these programs address the biggest limitation of any storyboard: those things just don’t move.

As thrilling as it is to see a movie take shape in the visual medium of a storyboard, it still amounts to nothing more than a series of static images. Critical elements like timing for comedic or action sequences have to wait until an honest-to-goodness moving picture is available for review.

This lack of motion and energy in storyboards bothered one director so much that, as the story goes, in the mid-1970s he decided they weren’t up to the task. Instead of storyboards, he had his editors cut World War II dogfight footage into key action sequences of his big science fiction film. Once it was assembled, he showed the sequence to his special effects crew, so they would have a better idea of what he was looking for from the final footage.

The technique was a resounding success. The film – a little picture called Star Wars – blew the doors off the box office, due in no small part to its abundance of dynamic and exciting special effects sequences. This dynamic storyboarding technique – dubbed “pre-visualization” – has become the norm for bigger action sequences in Hollywood. But what if you’re not shooting a massive action epic? How could pre-visualization help you?

Stop me if this sounds familiar. You’ve nabbed a great location for the climax of your project. You’ve taken reference photos, generated some terrific storyboards and are excited to shoot this beautifully-framed sequence. Then you get on set, place your actors… and there’s this annoying wall about a foot in front of where you planned to put the camera. Bye-bye, lovely scene. Hello, on-set extemporizing!

Using one of the 3D packages like 3D Frame Forge and Storyboard Lite can help you avoid this kind of problem. They allow you to create your shooting space with a simple 3D package. Once finished, you place your “actors” and props on “set,” then frame the shots based on where you can actually place the camera. That alone is a reason to consider your pre-visualization software package options.

More exciting is the ability to plan actual camera movement based on the beats of the script. Wonder if a slow dolly would help sell a particular moment? Do it with the pre-viz package and check it out. Worried that your planned in-car shot will look cheesy? Place your virtual camera into a “car” and see it for yourself.

All of this pre-visualization power comes at a cost. First, the more advanced packages aren’t cheap. Secondly, though these packages are designed specifically for video pre-production, they are still 3D animation packages. Expect to sink some time into learning them before you start using them in a meaningful way.

That being said, once you have your head wrapped around their interfaces, your options become limitless. In fact, once you understand how to thoroughly pre-visualize a shoot, you can realistically expect the act of actually capturing the real sequence to go much, much more smoothly.

Having all of these packages available to help pre-visualize a shoot makes a director’s task that much easier. Just remember that they’re not meant to be used as rigid shooting guidelines. Once you’re on set, the final decision is, as always, yours to make.

Tony Bruno has been making independent films for four years, is an occasional actor and makes his living as a professional technical writer.

Sidebar: Pre-Viz on the Cheap

Follow these steps to create pre-visualizations with your editing software package.