Our own Morgan Paar was on hand in New York to see the new HDV offerings in the form of the XH G1 and XH A1. He wrote back saying, "These look great and having Canon glass, you know they will shoot a great image." These two are Canon’s first HDV camcorders in this handheld form factor, and they’re identical in most regards; they record 1080i video, have balanced XLR inputs and utilize three rings on the Canon 20x HD lens. Each model can store custom presets in an internal memory, which is nice considering the wide range of shoots you’ll be using them on.

The $3,999 Canon XH A1 packs a wallop by featuring the same native 16:9 3CCD imagers and frame-modes as the XL H1 does. The $6,999 XH G1 adds to that by featuring Canon’s professional jack pack (SD/HD-SDI), and more image tweaking options. It’s been nearly four years since the GL2 made its debut, which these new models look to replace this fall.

Look for the XH A1 in time for Halloween, and the XH G1 soon after.

Democracy Player is a free video player from the Participatory Culture Foundation. And hey, a participatory culture is where we’re headed! Watch Internet television at full screen, and upload your own video for others to see. This little app is connected to an ever-growing community of video producers who wish to broadcast their video down new avenues. We’ve been especially keen on the documentaries available, but don’t forget to check out a number of musicians and cartoon animators too. So subscribe to your friends’ video, or broadcast your own content and add it to Democracy’s list of channels. Go ahead and share, it’s easier than you might think!

Are you Watching? See what Everyone’s Talking about at Videomaker Presents… 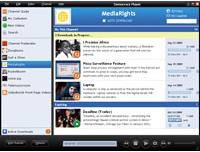 Our Vidcast, Videomaker Presents, gives you the latest news in the world of video production, answers your questions and critiques video produced by members of our community. A sample of our recent episodes:

Episode 23: Print media companies like the New York Times are gathering news in a new way by using
video cameras for blogs and web news. Also, shooting tips on multi-cam performances and fireworks shows, plus producer George Miller’s commercial spoof: Matt’s Lemonade. In our final "Insider" segment, Matt York talks about how the video business has changed in the 20 years he’s been publishing Videomaker.

Episode 24 We look under the hood of HP’s latest xw8400 computer, and talk about a new hard drive from Seagate and a Blu-ray burner from BenQ. Our tips and techniques segment offers a good lens cleaning method along with your filters use and function. Our "Take 20" segment critiques Utopia, by Riley Harmon. Matt York begins his "Viewfinder" segment looking at ways to profit from video sharing over the Internet.

Episode 25: We talk a little bit about Sony’s trade-up program for your old camcorder and we discuss a technology by Ricoh, using a prism that can read both HD DVD and Blu-ray discs. Our tips and techniques segment continues our look at filters, comparing hard lens filters with software filters. We critique producer Randy Elwin’s video, Caffeine Trance, in our "Take 20" segment, and Matt talks about video sharing proliferation in his "Viewfinder".

Get started with the Videomaker Presents at www.videomaker.com/vidcast, and don’t forget to send us feedback at editor@videomaker.com.