Filmmakers are always talking about getting their work on the big screen–but don't forget the small screen. X-OOM's Movies on PSP gives you a way to easily compress your work to play on the 3¾” x 2¼” screen of a Sony PSP. It claims it can convert DivX, AVI, WMV, Real or MPEG at the click of a button. The resized and optimized files can be saved to your computer's hard drive or to a Memory Stick for PSP viewing. We love the idea of carrying our shorts in our shorts. 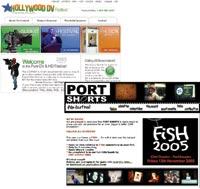 TV for the Vain

Here is another reason to spend more time in the loo: VisionMirror, a television built into a mirror. When switched off, you only see the mirror (and yourself.) When switched on, this waterproof factory-made TV mirror will not only show you broadcast, satellite and/or cable television, but will also accept a computer signal as well (which means you can edit as you brush your teeth, if you wanted to). The VisionMirror is operated by infrared remote control.

<p.What's That Finished Video Doing in
Your Closet? Let it Be Seen!

The world's largest showcase of Latin American and Caribbean film and video. Entries may be made by non-Latin American filmmakers who use Spanish subtitles in their work.

The mission of UMSLSFVF is to promote the art of filmmaking on all levels by encouraging student filmmakers to showcase their work.
College student submissions only. Entry Fee: UMSL Students and Alumni:
Free; Non-UMSL Students: $25/per entry

Stand Up for Freedom PSA Contest

There does not seem to be an entry fee.

All works must only be 3 minutes in length and final submissions must be on Mini DV. There are 3 categories for films: Best Super 8 film, Best Digital Film, Best Animation.

The 12th annual Slamdance Film Festival will be held in Park City, Utah. Focus is put on first time filmmakers.