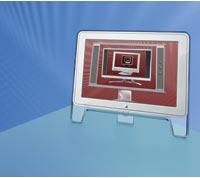 More than a decade after the first successful television transmission, it became clear that a broadcast standard would be needed. The group that created these standards called themselves the National Television Standards Committee, or NTSC for short. This is the broadcast standard in the USA–other parts of the world (predominantly Europe) use PAL or SECAM instead.

Many of the professional CRT-based NTSC monitors available have many of the same basic features. These include a 4:3 / 16:9 switchable aspect ratio, H/V delay, underscan, at least two composite A/V inputs, Y/C and RGB and Y/R-Y/B-Y format inputs. Most of these units use a menu-driven interface generally accessed and manipulated via a remote control or front-panel controls, and are often rack mountable. Most models, however, do not come with speakers and if you're wanting to view in PAL or SECAM formats as well as NTSC, you will pay more. While all features are important, probably the most important feature on any professional NTSC monitor is the ability to manually adjust color settings, brightness and contrast to fit SMPTE (Society of Motion Picture and Television Engineers) standards. Refer to the manufacturer's listing for examples.

DVI (Digital Visual Interface) is a relative newcomer to the world of computer video, although the standard quickly found a second home in home theater applications for connecting digital TV tuners and satellite receivers to display devices. It provides a completely digital path from the computer to the monitor, bypassing any unnecessary digital-to-analog conversions, giving a very clear image with practically no tweaking required. This comes at some cost, though–however, the cost of all LCDs has been slinking down slowly but surely as manufacturing processes become more refined. Using a DVI connection on your monitor also requires having a video card with a DVI output. See the manufacturer's listing for more information.

VGA, NTSC, ATSC, digital or analog, 640 or 1280; it can all be intimidating, especially when hundreds or even thousands of dollars are required for your purchase. By knowing your requirements for a new monitor and using the information provided in this article, you'll be able to narrow your scope of options and make an informed decision.

Michael Fitzer is an Emmy™ Award winning writer/
producer and a partner in Blackfish Films, LLC.

So what’s the difference between a TV and a monitor? Well, a monitor is essentially a TV without the tuner. A monitor will usually have other controls such as a selector for seeing all of the video information (under and overscan selector). Frequently, monitors also feature rugged design and more precise controls of contrast, color and brightness, and a greater variety and amount of inputs.