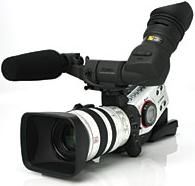 While the Canon camcorder XL1 was initially designed to be a high-end consumer product, professionals soon found that the camera had the quality to do serious work, even on the big screen. The new XL2 starts with the professional in mind. Reworked from the CCD up, this is not just a refined update, but is instead a totally new camera that manages to feel like an old friend.

The stock 20x Canon video lens is a thing of beauty and, of course, it is interchangeable with other lenses. Although the manual focus and zoom rings activate servos to adjust the lens, they have a great feel to them. The ND filter swings into position with a satisfying click, and the stabilizer and autofocus controls are solid and conveniently placed. This lens also has a button labeled “POSITION PRESET” that acts as an automatic focus pull or zoom control that stores a preset position for instant recall.

The new 1/3-inch CCDs are oversized. Oversize CCDs are commonly used for still images in most modern camcorders, but are used in the XL2 for 16:9 widescreen shooting. The results are wonderful and the anamorphic video squashed into the DV format looks great on a widescreen TV or when authored to
a widescreen DVD.

Shooting with the Canon Camcorder

Although it would be a waste to keep the camera in auto mode, it is possible to pick it up and fire away with excellent results. The auto focus had a hard time with slow shutter speeds (e.g. 1/30 and 1/24), but those aren’t speeds you’ll often use. Conveniences like variable zebra stripes, a simple exposure meter on the LCD and red gain warning LEDs just below the viewfinder were truly useful when shooting.

The new hybrid LCD/viewfinder is a welcome addition. At 2-inches, it isn’t large, but 200K pixels mean that it is sharp and clear. This may seem like a minor new feature to those of you who have never used an XL1 before, but we love it. Incidentally, this is a big camera with a lot going on: we found that the BP-924 battery (the same as the XL1) lasted about an hour, but only took an hour to recharge.

With all the imaging glitz, we almost forgot to look at the audio. Our second favorite usability improvement to the Canon camcorder is the smaller (and included) XLR adapter on the back. With 48V phantom power and built-in attenuation, the XL2 is ready for your microphones right out of the box. The camera also has a novel use for the 12-bit audio mode of the DV format. Instead of just using the four possible channels as a dubbing tool, (with an adapter) the XL2 will actually allow you to connect four microphones at once and mix each of them right on the Canon camcorder, each with individual gain controls.

One of the buzzy aspects of the XL2 is sure to be the variable frame rate, in particular the 24p mode. First, 24p does not make your video look like film. Only film looks like film. Unless you are already raising money to transfer your project to film, you should forget about the technical reasons for selecting a 24p frame rate. That said, there are artistic reasons why a videographer might want to shoot 24p: it does make video look more like film. The camera also has a 30p mode, which we wouldn’t often use, since the look of Canon’s 30p can easily be duplicated in post using a deinterlace filter on 60i footage.

We shot a number of scenes in the standard 60i and 24p modes. We have to say that there is a distinctly different flavor to the progressive mode, which is a little softer and shows a little more motion blur and stuttering on fast-moving objects. The 60i video looks great, but it is starkly crisp and sharp in comparison. If you are unfamiliar with shooting in these modes, the LCD/viewfinder has a handy red LED warning light to help you select the appropriate shutter speed in each mode (e.g. 60i-1/60 and 24p-1/48). Again, we aren’t claiming one mode is better than another. In the end, it’s an artistic decision, but we’re glad we have the choice.

The XL2 has an almost endless number of imaging adjustments you can make. A beginner might want to start by setting the Gamma and Color Matrix to Cine mode and see what it looks like. A more experience cinematographer might really be able to take advantage of the Knee, Coring and Skin Detail adjustments. In all, you can make fine adjustments to 15 items, which save automatically to three custom presets. Then you can easily recall the presets with the press of a button.

While it might seem like you are only making very minor changes here and there to tweak your image, the results are dramatic and distinctive, but not in a special effects sort of way. Instead, these settings let advanced videographers fundamentally alter the look, feel and quality of their video. Putting it all together – 24p, 16:9 widescreen, Cine Gamma and Color Matrix – and it doesn’t feel like television anymore. We also tried out the Film Grain feature, but found that it added too much compression noise to busy areas of the scene, such as in background tree leaves in a gentle breeze.

If that’s not enough control for you, Canon is even releasing a software development kit (SDK) that will allow programmers to adjust the behavior of the camera right down to its core, via the FireWire interface. What hardcore professionals will eventually do with the camera and the SDK is just speculation. (Fortunately, the camera is very easy to reset to its default factory settings: just remove both the main battery and the lithium button battery for a few moments.)

If you are shopping for a camera in this class, there are only a few cameras worth considering. The XL2 has only two relative disadvantages when compared to these other Mini DV cameras. First, it is quite a bit larger and heavier. Second, it is more expensive.

As a professional camera, we haven’t even covered the entire product. From free-run SMTPE time code to a composite BNC video out connection, this is a professional camera. The beautiful glass and the new CCDs make the XL2 a lovely camera that produces objectively wonderful video. Its flexibility, however, is what makes this a camera for artists as well as for technicians. In our tests, we weren’t able to find anything wrong with the Canon camcorder camera, but it was the detailed imaging controls that really released the camera from merely shooting good video and into the realm of cinematography.

The Canon XL2 takes the Mini DV format to its artistic limits.