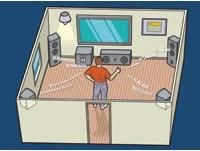 Last month, we made the pitch for upgrading to surround sound. This month, we'll take raw materials and craft them into a complete DVD sound environment.

5.1-channel sound is a brave audio new world for the video producer, but the results can take your projects to a whole new level.

Surround sound post-production requires a little more equipment than the typical multi-media speakers system that came with your computer. First, you'll need a multi-channel soundcard. This sounds simple enough, but there are many options to consider, and prices are all over the map. If you're after the most cost-effective method, consider a basic multi-channel soundcard and a simple set of surround speakers. With some careful shopping, you can do this upgrade for around $100. Creative, Turtle Beach and others offer basic soundcards with 1/8" unbalanced outputs for front, rear, center and subwoofer speakers — these can be found for $50 or less. Logitech and others have several good-sounding surround speaker systems that sell for under $100. If possible, listen to the speakers before you buy. You want crisp, clean sounding speakers and a subwoofer with a volume control for fine-tuning. It's hard to mix on muddy sounding speakers and you'll make decisions that don't translate well to other systems.

If you have a few more dollars to invest, consider the Logitech Z-5500 (the previous model also sells as the Alesis Pro-Active 5.1). This THX certified system has enough inputs and power for virtually anything you'll ever do on your computer. Of course, there are many other speaker options out there; just let your ears and wallet guide your decision. The final option is to use one of the many soundcards with optical output in conjunction with an all-in-one home theater package. The soundcard outputs 5.1 digital surround over a Toslink optical cable. The optical cable plugs into an auxiliary input on the home theater amplifier, and you'll use the supplied speakers for monitoring. This setup has many benefits. First, it accurately represents the sound of your video as heard in a typical home theater. Second, it's fairly economical with sufficient systems starting at a couple hundred dollars. Third, it can do double-duty as a home entertainment system and, finally, you may already own one.

Surround mixing is a very subjective matter however; there are some conventions we can start with. In addition, there are separate techniques for surround mixing in an audio application versus a video-editing program. We'll try to boil it all down to the essential elements. Here's the scenario: you're mixing a dialog piece between a couple of characters in a park. You have your dialog elements along with stereo music, a couple of sound effects and the simulated surround recording described in last month's article. First, let's do a little preparation. In your video or audio editing software package, create separate left and right channel files of the stereo recordings, naming them appropriately (music-left, music-right, surround-left, surround-right, etc.). This will give you more surround options later. Next, go through your dialog track — in either your video or audio editor — and clean up any abrupt changes in volume that you hear. The goal is to be able to smoothly fade into and out of each exchange. Once you have all your elements clean and in place, it's time to mix.

Stereo mixing is pretty simple; spread the music and effects across the left and right channels and plant your dialog in the middle. Surround mixing adds not only two rear channels, but also includes the subwoofer or LFE channel. You'll have to spend some time planning what elements go where and how much thump you want in your soundtrack. Dialog is easy — unless you want to be artistic, it goes directly in the center channel. To place it there, open your surround-panning mixer and move the dialog track to the top center of the panner. Some mixers allow you to place sounds exclusively in a specific channel or just outside that channel. This allows some of the sound to leak into the other speakers. For this project, we'll put the dialog track directly in the center channel. As you get more comfortable with surround mixing, you may want to experiment with alternative placements to further reinforce the voices that you place within your mix.

Another simple mix decision is the placement of stereo music. This is where the separate left and right files come into play. The easy way out is to place the left and right channels in their respective pan positions and call it good. But if you listen closely to commercial DVD releases, you'll usually hear some music in the rear channels too — not as prominently as the front channels, but it's there. With the surround panner, it's simply a matter of placing the left music channel somewhere between the left front and left rear position, leaning toward the forward position. Do the same with the right channel and listen to your emerging mix, making adjustments to suit your taste. Sound effects and foley recordings can be placed in stereo space or specifically located where they occur on or off screen.

Now it's time to take your surround recording and create the environment. Last month, we described a way to record a sort of extreme stereo mix with two microphones. Just like the stereo music placement, we'll pan the channels left and right, but this time, we're moving the sound toward the rear, rather than the front. Although this isn't a true surround recording, once it's placed in the mix with all the other elements, it creates a surprising sense of the surroundings in your scene.

Once your mix is complete, it's a good idea to listen to the whole project on your surround system. Better yet, burn a DVD and listen in another surround environment, like a friend's home theater. Take along a legal pad to make notes, and then it's back to the editing suite to make corrections. If you did all your mixing in a video editing application like Premiere Pro or Vegas, you're pretty much done. If you mixed in an audio-only program like Audition, you'll need to create a multi-channel WAV file of the finished mix, place it into your video project and check for lip-sync and other potential timing errors. Depending on your Dolby Digital encoder, there may be several other possible tweaks before you have something you're really proud of. So what if you burn a few DVD coasters along the way — you just took a huge step into future of video sound.

Anyone can buy the equipment to monitor surround sound. But proper setup can turn a ho-hum system into one that really sings. First, there's speaker placement. I know your desktop is already crowded, but it's very important to carve out some space for proper left, center and right speaker placement. Surround speakers should be on stands 110 degrees to the left and right of the center speaker. And don't forget to calibrate your system with a sound pressure meter and a calibration DVD like the Avia Guide To Home Theater. This insures the correct volume from each speaker and will help you make better mix decisions.