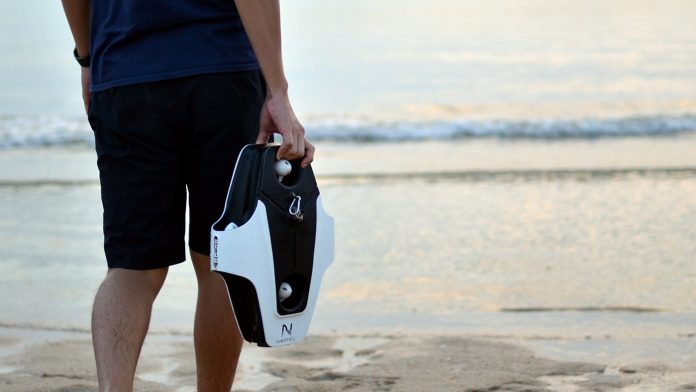 There are lots of new drones flying in the skies these days, but not many are swimming around in ocean waters. Navatics today has revealed an upcoming underwater drone capable of shooting 4K 30 fps video.

The drone is being dubbed the Navatics MITO, and Navactics describes it as âa remotely operated underwater vehicle equipped with advanced active stabilization technology that provides new levels of underwater video.â

Navaticsâ MITO offers 4K video at 30 fps at up to 130 ft underwater. Also, through its accompanying mobile app â available for iOS and Android â it can stream video up to 500 meters away at 1080p resolution. It also sports an active stabilization algorithm that allows the MITO to hover and âkeep it orientation even in the complex underwater currents for up to four hours,â according to Navatics.

Itâs reportedly attached to a floating tether to allow it to transmit controls âprecisely and accurately to the drone deep underwater, where normal wireless controller signals canât reach.â The app also has built-in tools for color correction and can share videos and images directly to social media.

Additionally, the MITO uses four thrusters that allow it to tilt up and down to 45-degree angles, while âmaintaining its depth, heading and orientation at speeds of up to two meters per second,â according to Navatics. Thereâs also two 1000 lumen LED lights giving âexcellent vision and illumination underwater, providing better colors on video and images,â says Navatics.

âWith Navatics MITO, our goal is to create an underwater drone with the ability to stream high-quality video and maneuver with maximum stability to get the best footage.â said Andreas Widy, CEO of Navatics. âWe want to provide this professional level experience, so that anyone from the hobbyist consumer to the professional videographer can experience the marine world without limitation.â

The Navatics MITO is available for pre-order on Kickstarter now with a super early bird price at $1,199, which includes the drone with a 4K camera, one battery, a remote controller that attaches to smartphones, and a 50-meter tether. It will start shipping this September.