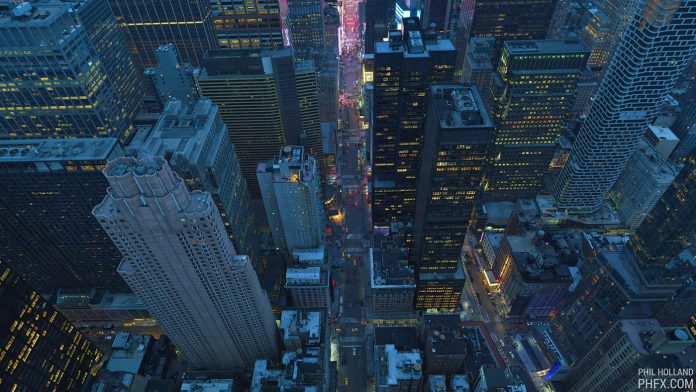 Get ready, because your eyes, and potentially your GPU, may not be able to handle this. Cinematographer Phil Halland just uploaded captivating video that glides over New York City in 12K.

Halland shot the video using three RED Monstro 8K VistaVision cameras, which were turned sideways and mounted on a unique rig called the Shotover K1 Hammerhead. The video were stitched together in post to bring this 12K video to life, later being uploaded to in 8K (since there’s currently no way to display 12K):

Each frame of Holland's stunning video is equivalent to 100 megapixels and uses a sensor area that’s about equal to 645 medium format film.

Holland wrote in a blog post a few months back that he knew that this video was going to turn out great. “On a creative level I knew this was going to be good; Monstro's strengths come in the form of great color, dynamic range, and very clean shadows. Which would work great for low light and night,"

He shot the video using Tokina’s 35mm T1.5 lenses, citing that he wanted to use the lens for its low-light performance and large image circle.

When in post, Holland had to go through the tedious process of having to align, wrap, stitch and blend everything to make this 12K video. Also, the cameras were pointed in different directions, so the shots had to have perspective adjustments.

The image ended up in 12K at a standard DCI 1:9:1 aspect ratio. "Interestingly you can extract a very IMAX friendly image from this setup as well with an appealing FOV and resolution for proper IMAX screens," Holland says.

While we aren’t able to see the video in it’s full 12K potential, even just being able to view the video in 4K, let alone 8K, is already striking enough to appreciate what Holland has done.