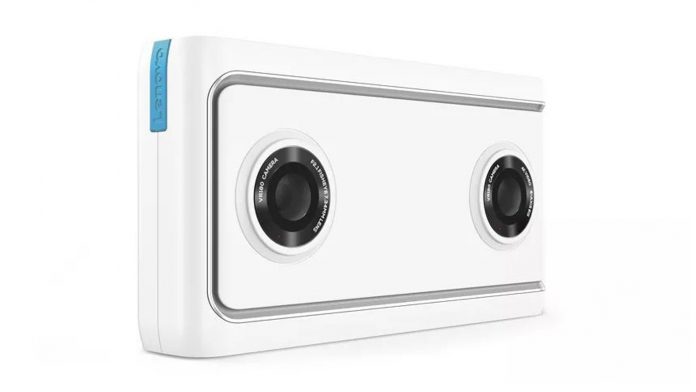 Lenovo has released its new 299 dollar Mirage Camera this week, and it’s the first camera to use Google’s VR180 format.

Google’s VR180 format was announced about a year ago, which is a more limited cinematic VR format that is aiming to be accessible as regular YouTube videos. It’s a collaboration between YouTube and Google’s Daydream VR division. Now, the Lenovo’s Mirage Camera 180-degree is the first camera to feature the Google VR180 format.

Reportedly, thanks to its 180-degree video format, video capture and playback is designed to be easier with the Mirage Camera than with full 360-degree VR video cameras. It features two 13-megapixel cameras that can take stereoscopic images and videos in the VR180 format.

The Mirage Solo puts everything you need for mobile VR in a single device,” said Google AR and VR VP Clay Bavor in a bog post Friday. “You don’t need a smartphone, PC, or any external sensors—just pick it up, put it on, and you’re in VR in seconds.”

VR180 videos look basically the same as a regular video in browsers, but at the same time, the format allows those viewing the video in a headset to look around and watch content in 3D.

“Photos and videos taken with the camera transport you back to the moment of capture with a 180° field of view and crisp, three-dimensional imagery,” said Bavor.

But since VR180 videos aren’t 360-degrees, the videos in a headset are immersive if you’re facing forward, but you can’t turn or look behind you.

Google is also releasing a new VR180 app for both iOS and Android that can help users configure, manage and upload VR180 content to Google Photos and YouTube while also offering an option to stream VR180 videos live on YouTube.