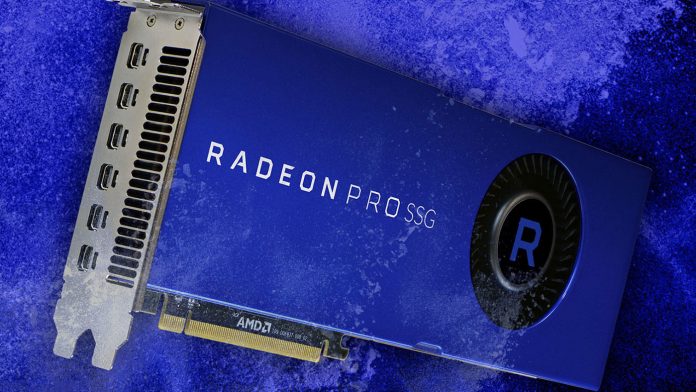 Next week at NAB 2018, a new version of Adobe Premiere Pro CC will be launching with native support for AMD’s new Radeon Pro SSG graphics. This pairing will make Premiere Pro CC much more efficient at handling 4K and 8K video files.

The Radeon Pro SSG sports the “Vega” GPU architecture, allowing it to deliver up to 12.3 TFLOPS of performance. The card also features 16GB of High-Bandwidth Cache that AMD has based on the most up-to-date HBM2 Error Correcting Code Memory. The new card also uses a High Bandwidth Cache Controller, which is said to be the world’s most advanced GPU memory architecture yet.

The combo will additionally reduce CPU and memory bottlenecks, allowing “editors to do their best work with uncompressed visual fidelity” with “extraordinary computational performance and memory capacity” to decode them in real-time, according to AMD.

“The promise of filming in 4K and 8K has always been about removing creative constraints, about providing more creative control with higher-resolution footage. Unfortunately, those creative ambitions have been sidelined by technology limitations that have made 4K and 8K editing practically impossible,” said Ogi Brkic, general manager, professional graphics, Radeon Technologies Group, AMD. “Today, reality catches up to ambition as Adobe Premiere Pro CC and Radeon Pro SSG deliver the high-resolution workflow you’ve always dreamed of, enabling accelerated editing of a wide range of media, letting creators bring their visions to life in uncompressed 8K glory.”

According to AMD, the Adobe Premiere Pro CC and Radeon Pro SSG merge will eliminate any need to use proxy files, which are used in place of original files with high-resolutions to make things easier to manage on workstations.

“With the combination of Adobe Premiere Pro CC and Radeon Pro SSG, proxy files are a thing of the past. Editors can now work with multiple streams of 4K or 8K footage at full resolution in an uncompressed format as smoothly as they could with lower quality proxy files.”

The Radeon Pro SSG is available as of today, April 3rd, and the Adobe Premiere Pro CC + Radeon Pro SSG workflow is expected to be added to validated to platforms soon. AMD will be showcasing the new workflow at NAB this year, so if you’re attending you can see it in action for yourself.

You can learn more about the Radeon Pro SSG at amd.com.

10 mental habits of the professional filmmaker

How you can fake being on a Zoom video call

Stuck at home? Come hang with Videomaker on Discord

Want to be a guest on the Videomaker Podcast?