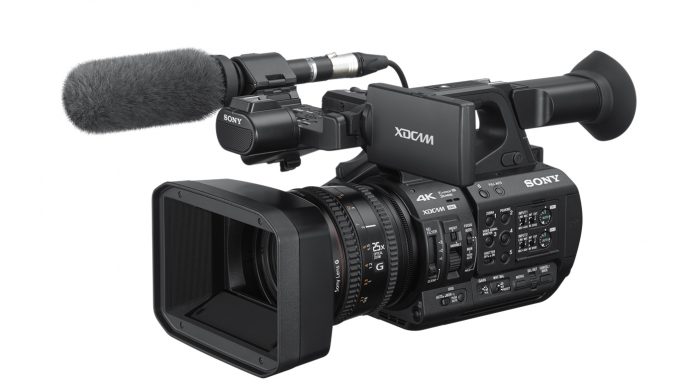 Sony’s making some major news at NAB this year. Not only has Sony unvealed the new FS5 II camera, the company has also introduced its upcoming 4K handheld, the PXW-Z190.

The Z190 covers a wide range of formats.

Both XAVC-Long and DVCAM are featured on the PXW-Z190. MPEG HD 422 and MPEG HD are available with an optional license.

Proxy 1080i up to 9Mbps can be used for 4K and HD simultaneous recording. The camera's additional features include 3G-SDI output and a remote terminal for multi-camera operations through Sony’s MCX-500 production switcher and RM-30BP.

Since the PXW-Z190 incorporates a 25x optical zoom lens with three independent lens rings, the camera covers a wide focal range. In the Z190's HD mode, Sony claims “a 50x zoom equivalent image without any picture degradation can be captured thanks to its 4K resolution sensor,” when using the optical zoom lens with Digital Extender.

It features a new “Face Only” auto focus.

Along with the Z190’s “Face Priority AF,” Sony’s added a new “Face Only AF.” Sony says that this feature has the capability to automatically focus on a specific person in a group and keep that person in “pin-sharp focus.” Seems like this feature would be great for shooting interviews or lectures.

You can expect a simple workflow when using the PXW-Z190.

The Z190 is compatible with Sony’s Instant HDR Workflow, making it quicker to make HDR content without additional color grading. Also, the camera’s “Content Browser Mobile” software allows it to be operated by a smartphone remotely. It can also  be used with Sony’s XDCAM air cloud-based service and file transfer, and streaming is possible through either a wired or wireless LAN or LTE modem connection.

The handheld camera has dual MI shoes, meaning you can use a wireless microphone and video light at the same time. An built-in electronic variable ND filter is included, and the Z190 records to SD memory cards, with dual card slots allowing for simultaneous, relay and back-up recording.

The PXW-Z190 is scheduled for a September 2018 release with its price reportedly below 4,000. Go to sony.com/pro for more information.