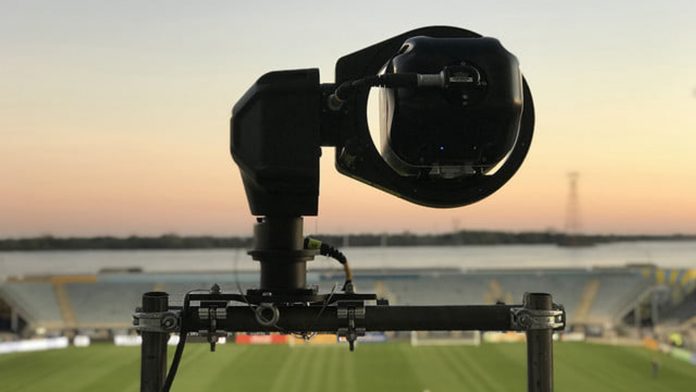 At NAB, Mark Roberts Motion Control (MRMC), a Nikon-owned company, unveiled two new automatic camera operating systems that use AI to track subjects without needing a human operator. Those systems are dubbed the Polycam Player and the Polycam Chat, and they both lend themselves to a variety of situations, with one built for sporting events and the other for in-studio work.

As the name may suggest, the Polycam Player shines when used for live sporting events. Since the Polycam Player can be mounted high above all the action, it can achieve angles not easily obtained by a human camera operator. While using ChyronHego’s TRACAB player, Polycam Player can physically move the camera as it tracks the subject and adjust the camera’s zoom and focus automatically. This gives the Player a more human touch than other automated systems that often just pan and scan shots from wide-angle cameras. Additionally, the Player has the ability to track either a specific player or multiple players.

“This technology gives clubs the ability to analyze opponents, monitor players and strategize with unprecedented information, all while providing broadcasters with additional low-cost camera angles to enhance content,” says MRMC.

There will be four camera positions available at its launch, two high end zone cameras, a high center-line camera and a player tracking camera.

For smaller studios, MRMC’s Polycam Chat is an automated system that can keep up to four people in focus and in the shot. Chat does this by using both face detection and limb recognition, allowing it to automate the camera’s operations.

The simple interface makes it easy for operators to use, while the flexible platform means it can be used with a number of different broadcast camera solutions including Nikon DSLR cameras,” says MRMC.

Release dates and pricing hasn’t been revealed yet. However, if you want to learn more about Polycam, go to mrmco.com.