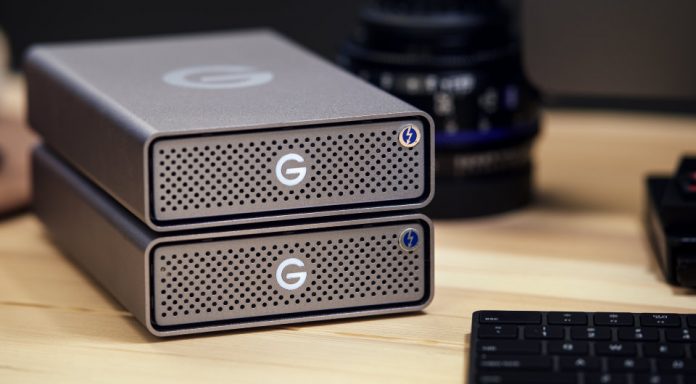 First up is the G-Technology G-DRIVE Mobile Pro SSD. As its name implies, this SSD is designed for on-the-go use and, as such, is more durable than its siblings. As a solid state, it is already more resistant to drops and falls compared to its hard drive competitors and its rugged casing makes it even more impervious to minor damages. Like the other new SSD models, the G-DRIVE Mobile Pro SSD uses a Thunderbolt 3 port to maximize transfer speeds.[image:blog_post:69473]

Available in two sizes, 500GB for 660 dollars or 1TB for 1,050 dollars, the G-DRIVE Mobile Pro SSD will begin shipping in Summer of this year.

The G-DRIVE Pro SSD boasts many of the same features as its Mobile counterpart but with increased storage space, an enterprise-class SSD and a second Thunderbolt 3 port. This second port will allow its user to daisy-chain up to five devices together, letting the user span production over several separate PCs.

The third and final product out of these new SSD models is the G-SPEED Shuttle SSD. Though all of these models are built to handle strenuous work loads, the G-SPEED in particular excels at doing just that thanks to being pre-loaded in RAID 5, though the RAID can be reconfigured for 0, 1, 10 or 50.[image:blog_post:69474]

This model is also available in the largest sizes of the three models, either 8TB for 5,100 dollars or 16TB 7,600 dollars. It’s slated to become available this month.