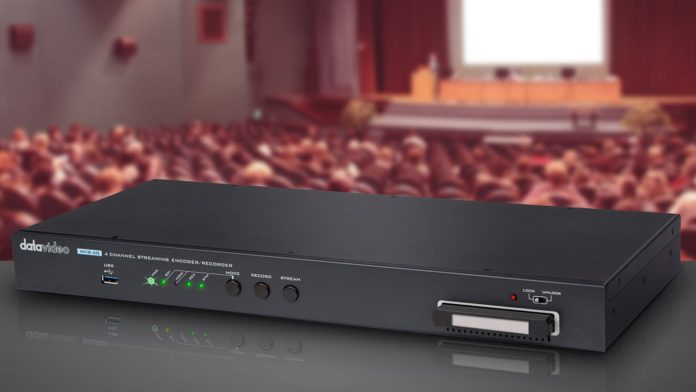 DataVideo Corporation said that at this year’s NAB it was going to be focusing on video streaming. It delivered on its promise with the debut of the NVS-40 Four-Channel Streaming Encoder and the HS-1300 6 channel mobile streaming and recording studio.

The NVS-40 combines the functionality of a multi-channel video encoder, streaming unit and recording device. With it, you can send out multiple streams to different destinations in a number of bitrates. DataVideo promises that recording is fully customizable with different GOP structures, frame rates and bit rates.

The encoder can downscale and de-interlace every signal it receives to allow those signals to meet with their destinations’ specification. You can also take four video inputs and allow the operator to choose which input to route to a single RTMP, making it similar to a video switcher. DataVideo also says the device can show all four inputs simultaneously on a quad-split, two on a 50/50 split, or even two as a main PGM + Picture-in-Picture.

The NVS-40 can additionally record directly to a hard drive still retaining master quality, according to DataVideo.

The HS-1300 is a all-in-one 6 channel mobile studio with built-in streaming and recording that can be carried in hand. It has all the same features as DataVideo’s HS-1200 while also including a built-in H.264 encoder for streaming. This in turn will make workflows simpler by eliminating the needs for an external encoder to stream.