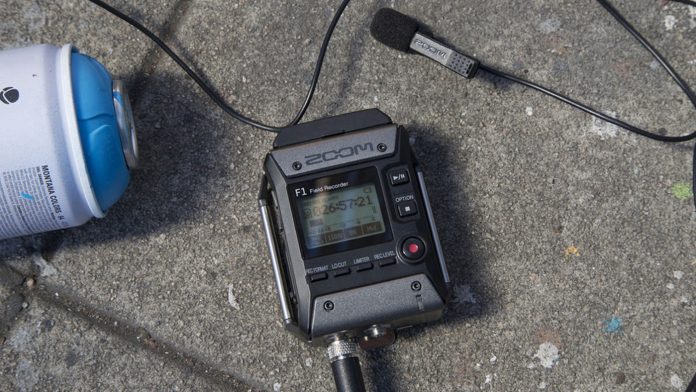 Congrats to Zoom and the F1 — our pick for Best Audio Record of NAB 2018. The Zoom F1 is a pocket-sized audio recorder that supports Zoom’s lavalier and shotgun mics along with all of Zoom's proprietary 10-pin mic modules. Zoom claims that the Zoom F1 is “the perfect solution for videographers who need to capture the nuance of every word with professional quality audio.”

The F1 comes in two different models with the only real difference being in what accessories they come with. One model includes a lavalier mic, and the other includes a shotgun mic. The recorder itself it the same accross models.

The F1 can recorded 24bit/96kHz to WAV files, or a variety of mp3 formats. Recordings are written to a microSD card as stereo files that you can edit later. And all of its main functions are available through dedicated buttons on the front of the device, meaning you don’t have to navigate through menu-dives to perform basic funtions.

With the lavalier mic, the F1 looks to be an extremely portable and simple way to mic your talent. Inputting the mic directly into the recorder eliminates the need for wireless transmission or messy cables — though the system does make real-time monitoring more difficult. If you decide to use the Zoom F1 with a shotgun mic, you can mount it onto your DSRL and get both internal recording and audio out to your DSLRs audio input. You can see how well it operates in the video below:

The F1 offers a pre-record feature that allows for two seconds of continuous recording to be buffered before you hit record. It also features a 1.25 monochromatic display. The Zoom F1 runs on two standard AAA alkaline, Lithium, or NiMH batteries, which Zoom says will allow it to last up to 10 hours using a lavalier mic — or you can use a AC adapter instead.

Here’s a more detailed look at what the Zoom F1 features:

The F1 with a lavalier mic, lavalier clip and belt clip will be sold for $199 and will be available soon.

For the shotgun mic version, it will come with a SGH-6 mono shotgun mic module, a shock mount, a windscreen and a cable for connecting to a DSLR. It will be selling for $249 and will also be available soon.

You can learn more at zoom-na.com.