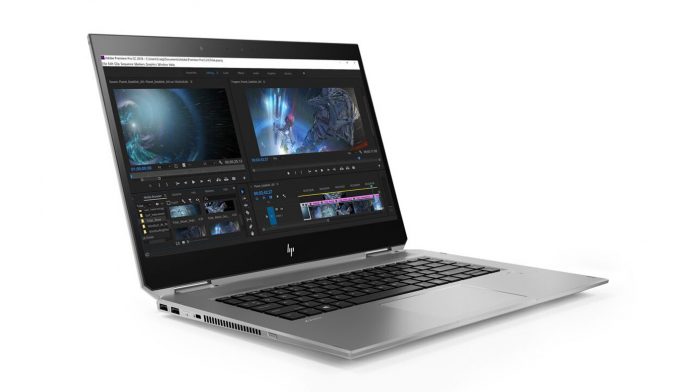 Congratulations to HP, taking home Videomaker's Best Display of NAB 2018 award for their new 27-inch DreamColor Studio display, the HP DreamColor Z27xG2. In addition, HP showed off a new powerful and convertible 2-in-1 mobile workstation from their line of ZBooks, the HP ZBook Studio x360 G5. That’s not it, though: HP has also updated the entire ZBook line of professional mobile workstations.

Here’s everything else HP announced in advance of NAB:

HP claims that the ZBook Studio x360 G5 is the world’s most powerful convertible laptop-to-tablet PC because it can be configured with 8th generation, six-core Intel Xeon CPUs and NVIDIA’s Quadro P1000 graphics card. This in turn should allow the x360 G5 handle high-res images without any delay, according to HP.

The x360 will feature a 15.6 inch display that can be configured in 1080p or 4K with HP’s DreamColor tech. HP’s DreamColor supports 100 percent of the Adobe RGB spectrum and produces a brightness of up to 600 nits. As for the rest of the x360’s exterior, it will keep the standard ZBook design, with a metal case and sharp lines.

Additionally, the x360’s battery can last up to 16 hours and can be charged up to 50 percent in 30 minutes, according to HP. You can also choose to us an 8th generation Core i5 and six-core i7 CPU instead of the six-core Xeon, if you so wish.

The Studio G5 has a lot in common with the x360 G5, but without the ability to transform into a tablet. It has a 15.6-inch display that can be equipped with a 4K touch panel and it can be configured with up to an Intel Xeon processor and NVIDIA Quadro graphics.

As for storage, the Studio G5 supports up to 6TB and HP claims it has a 35 percent higher processing performance than the Apple MacBook Pro.

According to HP, the ZBook 17 G5 “delivers the performance of a desktop with the freedom of a laptop.” It backs that claim up by packing 50 percent more cores, NVIDIA Quadro P5200 graphics, and 20 percent better thermal performance than before. The laptop comes in a number of Intel Core i5, i7 processors and Intel Xeon chips.

Head to hp.com for more information about all these PCs and HP’s display.