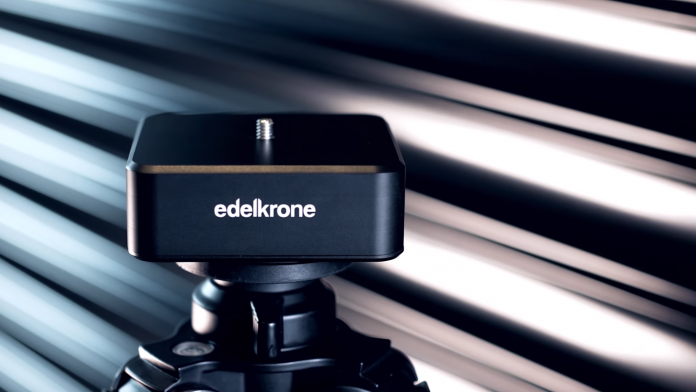 Congrats to edelkrone, winner of Videomaker’s Best Motion Control System of NAB 2018 for the edelkrone Motion BOX. The diminutive Motion BOX is surprisingly versatile in its applications. With a collection of expansion kits, the app-controlled Motion BOX can function as a pan or tilt head, a camera skater, a one-axis head for the edelkrone SliderONE Pro or a product turntable.[image:blog_post:69502]

The Motion BOX can be used in conjunction with a tripod, slider or other support, but it can also be used as a standalone device, making it appealing to photographers and videographers who don’t want to carry a lot of gear. At the same time, the Motion BOX, with its aluminum body, can support cameras up to 15 pounds.

The Motion BOX is Modular and Expandable

Panning along one axis requires only a single Motion BOX, and tilting is also possible with the addition of the Tilt Kit. In order to get control over both pan and tilt together, you’ll need a second Motion BOX. The two devices will pair up over Bluetooth for coordinated movements.

With the Skater Kit, the Motion BOX can transform into an app-controlled tabletop dolly with curve adjustment. The Motion BOX is also designed to integrate with the SliderONE Pro for a compact setup for panning while sliding. Finally, the Product Turntable Kit allows the Motion BOX to be used for capturing product B-roll.

The Motion BOX is controlled using the edelkrone app, promising easily programmed and repeatable movements. The app runs on both Android and iOS mobile devices.

In addition to basic motion control, the time-lapse functions within the app look to be particularly useful. For instance, users can program a move for real-time video, then recreate the exact same move as a time-lapse video, keeping duration, slide, pan, tilt and acceleration. Additionally, the Time-warper and Motion-warper features allow you to vary interval or movement speed within a single time-lapse.[image:blog_post:69503]

The edelkrone Motion BOX is expected to ship in early May 2018 for around 300 dollars. For more information, visit edelkrone.com.