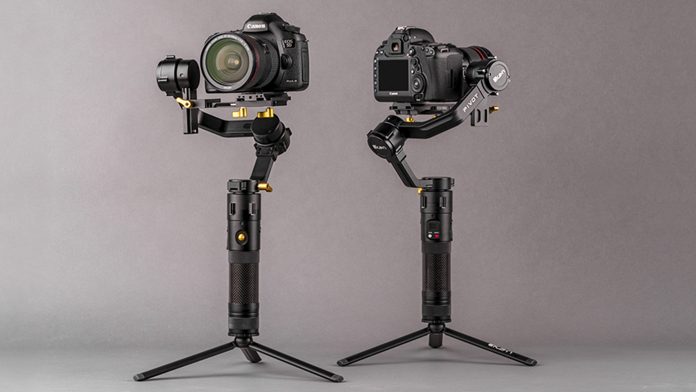 If you’re the owner of a DSLR, mirrorless camera or one of the smaller cinema cameras, and want to stabilize your shots, it looks like Ikan’s got you covered. The company recently released a new three-axis gimbal stabilizer called the PIVOT, and it supports cameras weighing up to eight pounds.

A Design that is Both Strong and Flexible

Since the PIVOT can handle payloads of up to eight pounds, it should be compatible with a ton of different cameras and their accessories.

The stabilizer also has an angled arm that allows it to elevate the camera above the roll motor, so the camera’s screen won’t be blocked. It also uses an adaptive algorithm with improved response speeds and torque.

The PIVOT is designed with light carbon fiber, and its handle comes with two 1/4”-20 mounts for accessories like lights, microphones or monitors. There is a 3/8“-16 thread at the bottom of the gimbal that allows it to be secured to a tripod, jib or dual handle system. The PIVOT is also compatible with Manfrotto 501PL series mounting plates.

Gimbal movements are controlled by a pressure sensitive joystick.

The PIVOT is controlled by a pressure sensitive joystick that increases the precision of all its movements, according to Ikan. The stabilizer features a OLED status display screen that informs you about its joystick direction as well as its battery life and operation mode.

You can control the stabilizer through your phone as well with the PIVOT’s companion iOS / Android app. It allows you to pan and tilt with your smartphone, wirelessly.

The PIVOT is priced at 749 dollars but is not yet shipping. However, Ikan will have it on display at NAB next week.

Go to ikancorp.com to find out more about the PIVOT.