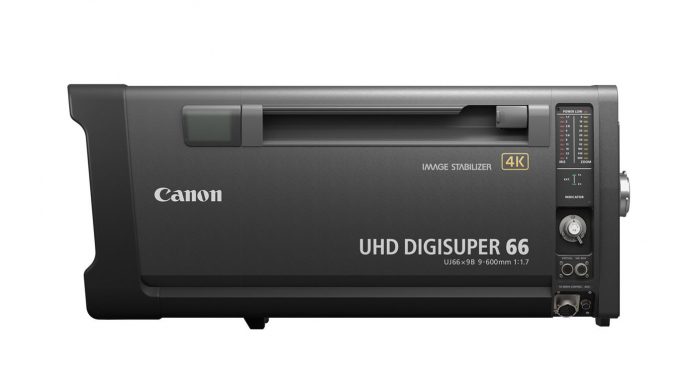 Canon is ready for NAB 2018 this weekend, unveiling four new UHD 4K lenses that cater directly to those in sport and live broadcasting.

The first of the four lenses is a mid-range telephoto zoom lens and is called the UHD-DIGISUPER 66. The other three are portable zoom lenses and are called the CJ24ex7.5B, CJ18ex7.6B and CJ14ex4.3B.

The UHD-DIGISUPER 66 is a mid-range telephoto zoom lens for UHD 4K broadcast cameras. It offers 4K with cameras that sport 2/3-inch sensors and features a focal length range of 9mm to 600mm. Additionally, it has a built-in 2x extender that lets you double the zoom range to 1200mm on the telephoto side.

The DIGISUPER offers a 66x zoom ratio and includes Canon’s Optical Shift Image Stabilizer technology, all of which makes Canon confident that this lens is perfect for sport and live event broadcasters.

As for its optical performance, Canon says the DIGISUPER 66 creates “beautiful images with no loss of sharpness or color from the center to the peripheral areas of image field.”

These three portable zoom UHDgc series 4K UHD broadcast lenses are compatible with broadcast cameras with 2/3-inch sensors, like the DIGISUPER 66. They feature materials like fluorite and Ultra-low Dispersion glass to achieve “high 4K UHD performance across the entire zoom range,” according to Canon. They also support a wide color gamut that’s been approved by the ITU-R BT.2020 UHD broadcasting standard.

"As 4K UHD origination becomes more popular in television news, the need for affordable lenses that can deliver the necessary imaging performance has grown," said Yuichi Ishizuka, president and COO, Canon U.S.A., Inc. "The new UHDgc series of lenses provides the optical brilliance that makes Canon a leader in broadcast lenses, while at a budgetary level that will make them attainable to a large swath of the industry."

To learn more about these lenses, go to usa.canon.com/provideo.