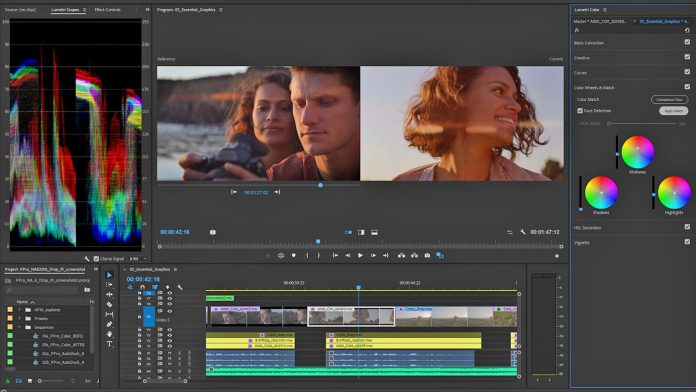 Adobe, days before NAB, has revealed that Sensei is coming to Premiere Pro CC and it's set on saving video editors precious time and energy while color and audio correcting.

The first, highly-requested feature that’s finally coming to Premiere Pro CC is automatic color matching. This feature is powered by Adobe’s AI Sensei and it will automatically adjust any clip’s colors and light values based around a reference image. Also, after Sensei is done with its adjustments, it makes all of its changes into editable color adjustments, so you can make any tweaks if you want to.

Additionally, there’s a Face Detection tool that does basically the same thing as the Color Matching feature. Face Detection locates the skin tones in the reference clip and then adjusts the other clips accordingly. Adobe has also included a split view feature that allows you to see the color grade shots side-by-side or with a wipe slider.

Sensei’s also lending its talents to audio in Premiere Pro CC with Auto Ducking. Premiere’s Auto Ducking will automatically adjust a clip’s music levels whenever there is dialogue or voiceovers present. This feature could be a huge timesaver for editors, who previously had to load up their timelines with keyframes to get the same result.

Like the Color Correction feature, all the adjustments are made into keyframes after Sensei is done so you can make custom adjustments.

Other Updates Coming to Adobe

Premiere Pro CC isn’t the only Adobe program getting updates. Adobe Audition will now be able to open native Premiere Pro projects, allowing editors to directly select the sequences that they want to work on.

After Effect is also getting a new Master Properties option that lets graphic editors adjust an element that occurs multiple times in the project just once. For instance, when making adjustments to fonts, editors no longer have to individually edit every piece of text’s font style. They can change all the font styles in one step. After Effects additionally now allows users to preview VR and 360 projects on a headset without the need to export outside of the program.

All of these Adobe Creative Cloud updates updates are available now. You learn more about all the new updates on Adobe's website.