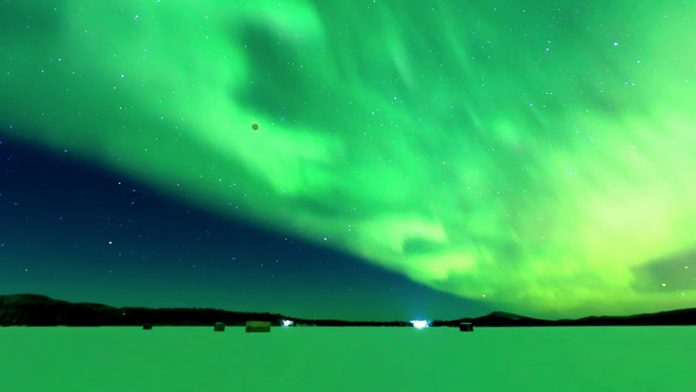 While there’s a ton of magnificent lunar eclipse videos out there, photographer / videographer William Briscoe was able to capture an absolutely stunning 8K, 360 timelapse of a lunar eclipse happening during the Aurora Borealis.

On January 31st, Briscoe traveled near Fairbanks, Alaska to film a 360 video of a super blue blood moon occurring alongside the northern lights. Briscoe admitted that is was quite a challenging task, writing, “It was a challenging night due to the temperatures.” He shot for 3-hours in a temperature of -31°F (about -35°C).

Since it was below freezing, Briscoe had to focus most of his attention on his camera rig to make sure it was operating correctly. He used a custom-built time-lapse 360 camera rig out of multiple DSLRs.

The video is actually a blend of two different images captured by two different camera rigs. Briscoe had to use two rigs because different settings were needs to properly expose the moon and the Aurora Borealis.

“The difference between the settings required to properly expose the moon and the Aurora is too great to do it in a single shot,” Briscoe says. “The 360 camera was set to expose the aurora and landscape, while a second camera attached to a telephoto lens was used to time lapse the lunar eclipse itself. I combined them in post.”

If he didn’t use two different camera rigs, it would be an entirely different video. The moon would have just appeared to be a white dot in the sky.